They’re just myths, right? Yeah. Not so much… - Senior Year Bites (The Clanless #1) by J.A. Campbell

From Goodreads: "I recommend this novel to fantasy lover, vampire lit lovers, and readers of YA fantasy. So go check it out, read an excerpt and show some author love. I'm sure a lot of you will enjoy this novel. I certainly did. :) " 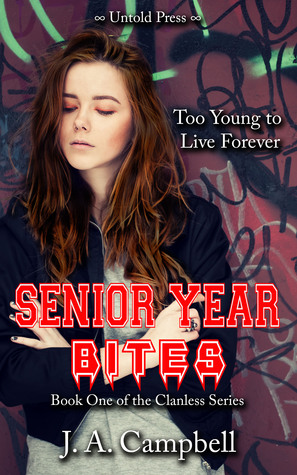 Senior year is supposed to be fun: boys, dances and graduation. It’s significantly harder to enjoy it when you’re dead.

Thanks to an innocent game of Truth or Dare, I wound up sleeping in a graveyard. Probably not the brightest thing I’ve ever done, but thanks to a couple of well-placed fangs, I’m here to tell the tale.

Vampires might stalk pop culture, but they’re just myths, right? Yeah. Not so much…

Everything seems a lot more difficult when you’re a nocturnal creature of the night, especially school. I was managing, but couldn’t keep it hidden from my friends. Steph decided that we should be cool, like superheroes, and fight crime.

I’m a vampire, not a hero. Living in a sleepy New England town, crime is a little harder to come by. At least it is until a serial killer moves into the area. He’s got the authorities stumped, but then again, the cops don’t have a teenage, blood-sucking, non-hero on their team. It doesn’t take long for me to discover the world is full of monsters. I may be one of them…but will I turn out to be the hero, or the killer everyone is looking for.

I had plans for my last year of college. I was going to find a boyfriend, go to a few dances, and though I hadn't told my mom yet, take some beginning paramedic courses in the spring. I wasn't entirely sure what I wanted to do with my life–wasn't that what college was for?–but I liked the idea of being a hero, like my dad, saving lives every day. That had been the plan anyway, but a sleepover and a late-night dare had changed everything.

"Megan, time for school," Mom called up the stairs.

I peeked out the window, squinting at the sunlight glinting off the windshield of my Jeep. It was too damn sunny for me to get from my house to the Jeep without third degree burns–or worse.

My newly sensitive ears could hear the soft brush of her socks on the carpet as she walked up the stairs. I crawled back into bed and did my best to look tired and sick. It wasn't hard with my pale skin, and I hadn't been eating well. If I didn't let her get a good look at me, she might buy that I had a cold or something. Another thought tickled at the back of my mind. I could make her think I was sick. I shoved the thought away in disgust. I wasn't going to use mind control on someone I loved.

The door creaked open, and Mom walked in. My heart would have been racing–if it still could.

I groaned and pulled the covers down off my head. "Mmmm?"

"It's time for school. You didn't come down for breakfast." Her flat tone covered her worry with annoyance.

"I don't." I tried to make myself sound hoarse.

"You've been eating so poorly. Try to eat, and then go to school. I'll write a note for you."

I faked a cough.

Mom sighed. "You've been sick so much recently. Maybe you should go to the doctor."

"No, it's just a cold." I hadn't been "sick" that much. We rarely saw the sun this time of year. As long as I wore sunglasses, a hat, and long sleeves, I didn't burn. It was simply really uncomfortable. I felt horrible for the deception, but what could I do?

"It's beautiful outside for a change. Go outside and get some fresh air."

I panicked at the thought. "No, I just want to sleep." And I did. So very much.

It was hard enough to be awake at all on cloudy days; sunny ones were pure torture.

My stomach sank at the worry in Mom's voice, but I couldn't tell her what was wrong. Not only wouldn't she understand, but I didn't want to end up in the freaking loony bin when I claimed I was something that didn't really exist.

"All right, honey. Sleep well. I'll call in sick for you."

"Thanks." I mentally shrank away from her concern and fought tears of frustration. I didn't want my life to be full of lies, which put distance between us. We had to take care of each other, but I could only hide from her.

She shut my door and left, quiet footsteps strangely loud in my ears. I sighed and pulled the blanket over my head again.

My life changed several weeks earlier at my best friend's ill-fated birthday party. Well, ill-fated for me, anyway. Steph had a great time.

Truth or dare, a stupid game everyone I knew played at least once in their lives. Afraid of the truth, I had chosen the dare–spend the rest of the night in the graveyard near Steph's house. Easy enough, right? Well, it had been up until the point where I was attacked and killed. It wasn't something you normally walked away from, but for better or for worse, I had.

Vampires were in books, movies, and on TV, but I'd never believed they were real. Still, it hadn't been hard to figure out what had happened to me. Dealing with it was another story. It had taken several almost disastrous mishaps–going for a walk in the bright sunshine had been particularly painful–to convince me. Now, the cloudy New England days that had been the bane of my existence provided my only semblance of a normal life.

Julie has been many things over the last few years, from college student, to bookstore clerk and an over the road trucker. She’s worked as a 911 dispatcher and in computer tech support, but through it all she’s been a writer and when she’s not out riding horses, she can usually be found sitting in front of her computer. She lives in Colorado with her three cats, her vampire-hunting dog Kira, her new horse and Traveler-in training, Triska, and her Irish Sailor. She is the author of many Vampire and Ghost-Hunting Dog stories and the young adult Tales of the Travelers fantasy series. She's the editor for Steampunk Trails and a member of the Horror Writers Association and the Dog Writers Association.

I am def reading this story. It's one of my favorite book genre.

I'm kinda giggling over the combination of this post and this blog. "They're just myths, right? Yeah. Not so much..." Great on a blog called Mythical Books! This one sounds sooo interesting! I'm on a vampire kick right now (well, on hiatus for a series on grim reapers), and I need to read this book! Love that the synopsis asks if she'll be a hero or the villain. You can't get more teaser-y than that!!

I love the concept for this book! Can not wait to read it! Thanks!