a frightening new world where everything has changed. - Chosen (The Djinn Wars, #1) by Christine Pope

“The Lord is my shepherd,” I began, then shook my head. What came next? The lines were all jumbled together in my head, nonsense syllables that sounded like something straight out of “Jabberwocky.” And what did it matter, anyway? We weren’t a religious family; we went to Christmas Eve services some years and some years not, maybe Easter. I’d gone to Sunday school when I was really little, but my parents hadn’t even bothered with that when Devin came along. 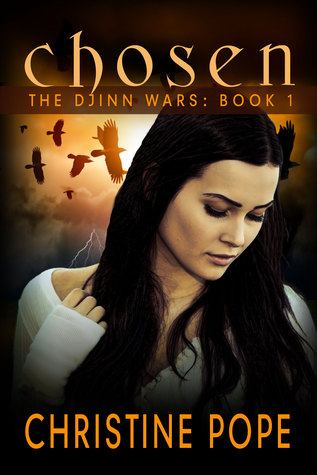 It began as a fever of unknown origin that its victims dubbed “the Heat,” but as it burned through most of the world’s population, it became known simply as “the Dying.” And for those left behind, the struggle has just begun….

In the aftermath of the Dying, survivor Jessica Monroe is protected and guided by the gentle voice of an invisible being she thinks of as her guardian angel. When she reaches the sanctuary he’s provided for her, however, she realizes that her unseen companion is no angel at all.

The destruction of humanity was only the first step in a much larger plan, and now Jessica must struggle to discover her own role in a frightening new world where everything has changed.

"If you want to read a story with a relateable strong female lead, a mysterious male lead, and enjoy reading about preppers or modern homesteading, then you can stop right now and buy this book in your preferred format without any further spoilers." - Goodreads

Now was the time to say a few words, but nothing seemed to come to mind. I couldn’t even remember the Lord’s Prayer, or more than the first few words of the Twenty-third Psalm.

“The Lord is my shepherd,” I began, then shook my head. What came next? The lines were all jumbled together in my head, nonsense syllables that sounded like something straight out of “Jabberwocky.” And what did it matter, anyway? We weren’t a religious family; we went to Christmas Eve services some years and some years not, maybe Easter. I’d gone to Sunday school when I was really little, but my parents hadn’t even bothered with that when Devin came along.

For the longest time I stood there under the oak, the sun disappearing altogether, deep dusk falling upon the yard. Then I moved, and the motion-sensor light mounted to the side of the garage flashed on.

“I love you all,” I said finally, then set the Waterford vase and the football trophy on top of their grave.

After that, I went back inside and shut the door behind me. It seemed to echo in the unnatural stillness of the house, and I realized it was hardly ever this quiet — someone always had the TV on in the background, or there was music playing, or somebody talking on the phone. Now the quiet pounded against my eardrums, and I realized how big a three-bedroom, two-thousand-square-foot house could feel when you were the only one in it.

The only one in the world….

The thought whispered through my mind, and I did my best to ignore it. Surely if I were immune, and not just having extremely delayed onset for some reason, that meant other people had to be immune, too. How many? I couldn’t begin to guess. I didn’t know the mortality rate of the disease. Even if 99.9% of the population was dead, that would leave around a thousand people still alive in the greater Albuquerque area, if I was doing my mental math correctly.

I turned on the overhead lights in the kitchen, then went through the house, turning on all the lamps. Maybe that wasn’t the smartest thing to do — maybe advertising my presence would do more harm than good. But I couldn’t sit there in the dark, not after everything I’d been through that day. Besides, when I peeked out through the curtains, I saw mine wasn’t the only house on the street that was all lit up. Most likely the others just had their lights on because no one was around to turn them off, but it did make mine seem less conspicuous.

“Are you there?” I asked of the darkness. Even a voice that was only a product of my imagination was better than this deep, deep silence, the kind of quiet you should never hear if you lived in a big city.

No reply, of course. My gaze shifted to the remote control, still lying where I’d last dropped it on the coffee table. I didn’t quite dare to turn on the television, not after what I’d seen the last time around. I could only imagine how bad it must be by now.

But there was still the stereo, and all the CDs my parents wouldn’t get rid of, despite Devin and me telling them all that plastic just took up space and that they should just rip all their music off those CDs and then play it through Apple TV or something. And now I had to be grateful for their stubbornness, because that meant I could get up and choose something to blot out the silence. My father liked country, but old country, like Hank Williams and Willie Nelson and Patsy Cline, and my mother preferred classical. That sounded better to me right then, so I found her favorite, Rachmaninoff’s Second Piano Concerto, and put that on.

It actually was better, with the sound of an orchestra and Vladimir Ashkenazy on the piano overriding that awful stillness. Or at least it was better until I realized that no one would ever play that piece live again, that there would be no more symphony orchestras or Arcade Fire concerts or anything, ever again.

“Oh, God,” I gasped, pushing myself up from the couch and running into the kitchen, where I turned on the faucet and splashed cold water in my face. As if that could begin to help. It was all too big to comprehend, so awful and enormous that I could literally feel the horror of it beginning to sink in, like some noxious chemical seeping into my skin.

And then it was as though strong, invisible arms wrapped around me, bringing with them a soothing warmth. Unseen lips brushed against my hair, and I heard the voice again.

Be strong, my love. Be strong for just a while longer.

Just as suddenly, the presence was gone. I held on to the tile of the kitchen counter, feeling the cool surface beneath my fingertips. In that moment, I truly wondered if I’d lost my mind.

What other explanation could there be?

A native of Southern California, Christine Pope has been writing stories ever since she commandeered her family’s Smith-Corona typewriter back in the sixth grade. Her short fiction has appeared in Astonishing Adventures, Luna Station Quarterly, and the journal of dark fiction, Dark Valentine. Two of her short stories have been nominated for the Pushcart Prize.

Christine Pope writes as the mood takes her, and her work includes paranormal romance, fantasy romance, and science fiction/space opera romance. She blames this on being easily distracted by bright, shiny objects, which could also account for the size of her shoe collection. After spending many years in the magazine publishing industry, she now works as a freelance editor and graphic designer in addition to writing fiction. She fell in love with Sedona, Arizona, while researching the Sedona Files series and now makes her home there, surrounded by the red rocks. No alien sightings, though...not yet, anyway!