Someday. I could live with that. - Love Bites by Rachel K. Burke

From Goodreads: "Love Bites by Rachel K. Burke is a great contemporary romance story. Love Bites will have you laughing and shaking your head at what just some people will do and say. Love Bites is about Justine and how she always chooses the wrong guy and how they leave her feeling after they leave." 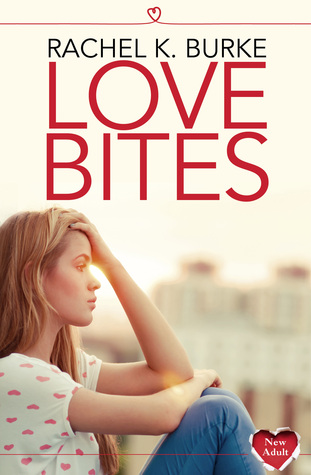 What do you do when you fall in love with your best friend’s boyfriend?

That is the question that twenty-six year-old Justine Sterling has been asking herself ever since the day she met David Whitman, her best friend Renee’s boyfriend. Justine is determined to ignore her growing feelings for the irresistibly charming David, until one night, when she finds herself in the bed of the one person she should stay away from.

When Justine and David’s affair ends in heartbreak, Justine is forced to repair the damaged friendship with her best friend. In doing so, she learns that right and wrong decisions aren’t always black and white, and sometimes you have to follow your heart to see where it leads.

"Love Bites is fresh, something different. [...] I never knew what to expect with the flip of each page. The story made me feel for Justine. I connected with her. Who hasn’t felt lost at one time or another? We all end up losing ourselves to something – whether it’s kids, a husband, boyfriend, or job. And when the thing that has been holding you together becomes the one thing to break you apart, a new, beautiful story is born. [...]

Add Love bites to your TBR list. When you’re tired of the same ol’ story, whip it out and give it a try. Rachel K. Burke has a way with words that will keep you coming back for more." - Goodreads

I didn’t sleep at all that night. Neither did David. The conversation between us just seemed to unravel and expand into further levels of depth, and before I knew it, the sun was streaming through the window.

I told him things I had never told anyone. My fears, my insecurities. He was the only person I had ever felt completely, wholeheartedly comfortable with. It was like I could be myself, unconditionally, without judgment. It felt real. It felt right.

David propped his head up on his elbow and stared at me from the other end of the sofa. “You do know you’re beautiful, right?” David, who typically joked about everything, was being completely serious.

“Everyone in L.A. is beautiful,” I said.

“Yeah, but you have an edge. You have that feisty east coast attitude. And honestly…” He hesitated, clearing his throat. “If we weren’t in these circumstances, I’d be with you in a heartbeat.”

“Oh come on, Renee’s great,” I said, trying to bring my best friend back into the picture before I forgot about her altogether and did something stupid.

“She is. But she can be really critical. I bet you’d watch football with me on a Sunday and not roll your eyes.”

I would’ve done anything with him if it meant I could stare into those crazy brown eyes for one more second.

“I’m really glad I came over tonight,” he said in a low voice, changing the subject. “I can’t tell you the last time I felt…” He closed his eyes. “I shouldn’t be saying this.”

He shouldn’t have. But I wanted him to.

There was a pause, and neither of us said anything. Something was changing. I could feel it. It was like an unstoppable force was pulling us together.

When I looked up, his eyes locked with mine, and my heart stopped. The look on his face was unfamiliar to me. He was usually so laid back and funny, but the intensity in his eyes felt like he was an entirely different person.

He inched his body closer and pressed his face toward mine, but I pulled back.

“But what?” he asked. “Don’t you feel this, between us? I know you feel it. I’ve felt it since the minute we met.”

“Of course I feel it,” I admitted. “But I love Renee, and I would never do that to her.”

“Okay, then we’ll wait,” he said. “We’ll wait until she breaks up with me. We’ll wait until she moves on. But… there’s something here Justine. You can’t argue that.” He looked straight into my eyes again. “Maybe we can’t act on it now, but someday.”

And then, as the sun came pouring through the window, I drifted off to sleep next to him.

Someday. I could live with that.

****
Two months after Renee left, David and I moved in together. I know, I know. It was a stupid decision. But when it comes to love, there are no stupid decisions. Only impulsive ones that seem to make sense at the time. Which later turn out to be those “life lessons” you always hear about, AKA the things you would never, ever make the same mistake of doing again.

Basically, it boiled down to four deciding factors:

1.) I couldn’t afford the rent alone.
2.) The thought of living with a stranger was petrifying.
3.) Renee hadn’t returned any of my phone calls in the past two months, thus I took this as a final termination of our friendship.
4.) I was so pathetically in love with David that I would’ve agreed to anything that increased our time together.

Sadly, over the past two months, we had become one of “those” couples. You know the type. The “no, you hang up first” couples. The “no, I love you more” couples. The couples that, when forced apart, spend every second whispering into their cell phones or giggling at their text messages or anxiously typing away on their instant messenger with a perma-grin glued to their faces.

So, naturally, when David came up with the brilliant plan that I should move in with him, I agreed.

At first, it was bliss. Granted, I missed Renee like crazy and still felt terrible about what I’d done, but David had me so brainwashed that we were these crazy cosmic soul mates that after a while, it was like he had replaced Renee. He had become my other half. My whole life. My everything.

What I didn’t realize was that, when two people dive into a relationship head first, eventually, someone has to come up for air.

Rachel discovered she wanted to be a writer at the age of ten, when her love of R.L. Stine murder mystery novels inspired her to start writing her own.

In 2008, Rachel combined her love of writing and music and began freelancing for a music column in Worcester Magazine. She also worked as a music journalist for Starpulse News Entertainment and Jamsbio Magazine, as well as a fitness journalist for Prevention Magazine.

Rachel graduated from Bridgewater University in 2011 with a B.A. in Communications and Media Studies.

the excerpt is very interesting, would love to read!

I love contemporary romance stories. This sounds like a fun one that I would enjoy reading !

Interesting story!! Thanks for hosting :)