One takes control. One finds balance in letting go. - Stranger Mine (Base Branch #3) by Megan Mitcham

From Goodreads: "Book 3 in the series, they just get better and better with each one. Piper and Ryan story will capture your imagination and take you on a roller coaster ride. I recommend this book to anyone who enjoys action and adventure in their romance." 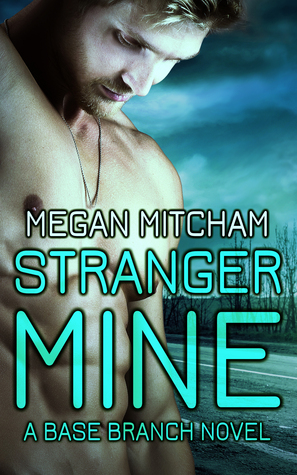 One takes control. One finds balance in letting go.

Base Branch operative, Ryan Noble is accustomed to taking orders whether from his commander or his overbearing mother. His best friend urged him to take control of his life, but the only thing worse than an angry woman is a teary one. He has no desire to upset his mother’s fragile emotions. Losing his sister was hard enough, his mom couldn’t bear losing another child. Even if it is to the other side of D.C. It’s a damn good thing she doesn’t know what he does for a living.

On a routine mission to destroy a cargo free human trafficking facility and exterminate it’s operators, Ryan blows his extraction to rescue a woman he finds chained inside.

Piper Vega is caught between metal and a hard place. She needs information and it has taken far too long to cull it from her leads, also known as her captors. She finally has the facts she needs to complete her task, but it’ll take a miracle to set her free and see it achieved. Santo Padre knows she never expected her good favor to come in the form of a man.

Through intense battles of will, Ryan takes the reins of life in his sturdy grip while Piper discovers balance in loosening hers and both find unexpected love.

“No dead bodies?” Piper arched a brow and made a show of peering around the chunky wood island and the table nestled in the breakfast nook. “I’m amazed.”

“Keep on pushing me. I could add another.” Ryan deposited the first aid kit he’d snagged from the hallway bathroom and narrowed his gaze at her.

“Confident. You’re cocky.” She dropped her gaze to his crotch. Her head tilted and her thin lips pursed.

“Here I was trying to be gentlemanly and discreet. You stomp all over tradition, don’t you?”

He crooked a finger at her. “Come here before you get angry and try breaking my nose again.”

“You might want to check it. I see blood and a hump at the base.”

“The hump is courtesy of the last guy who tried and succeeded. The blood will wash away.”

“All of it?” Her lips formed a grim line. “Seems you have a penchant for taking lives.”

“I have a duty. Now get over here,” he snapped.

When she didn’t budge, he jangled the keys he’d confiscated from one of the dead men along the way. Piper curbed her urge to stomp her feet like an agitated bull. She settled for a huff, crossed the kitchen, and offered him her cuff.

“You chose a male-dominated profession in one of the toughest precincts in the States. If you’re ever in distress, there’s no damsel in it. Just one pissed lady. You’ve probably never needed a man for anything. Not even to get you off. And you’d probably spit in any guy’s face who had the cajones to ask for your hand in marriage.”

He was already too damn close to the mark, to her body. The thick pads of his fingers warmed her forearm, while his eyes warmed her everywhere else.

“Who was dumb enough to hurt you? Father? Lover?”

Piper snapped her jaw closed the moment she realized the damn thing dangled open like an anglerfish on the hunt. She snatched the keys from his blood-crusted hands and green-stained fingers. He let her retreat to the other side of the island without a word. She longed to turn away from his knowing gaze. The azure-blue orbs with their reflective, nearly white flecks saw too much and reflected back her flaws.

Pinning the latch to the counter with her wrist and hip, Piper unlocked the crude accessory, removed her arm, and watched the heavy links tug from the shiny surface. It thwacked atop the pile. Freedom lightened her mood and body like the Lord above flipped a switch. Piper raised her chin.

“No one has ever hurt me. Not a father or lover.

“My dad was donor number 489760 from The Sperm Bank of California. I’ve never needed a man for anything. Neither did my mother, who raised three daughters on her own. I like men to get me off. I just don’t like them to hang around long after.”

His head canted and his studying eyes shone bright, surrounded by the dull gray and green of combat paint. Piper mapped the contours of his face. His wide-muscled jaw. The depression of dimples below his high cheeks and the lickable one at the brunt of his chin. Lips thicker than her own. A gently sloping brow pinched in thought. And damn that smile. She’d only seen a flash of it and knew she couldn’t take any more.

Sure, the stranger was crazy handsome, but something below the All-American exterior pulled her deep. A quiet pain hid behind his blinding smile. When he turned away and stepped to the sink, Piper released the breath she hadn’t noticed she’d been holding. He turned the water to steaming and went to work rolling the sleeves of his BDU’s. With copious amounts of soap he scrubbed the paint and life force of several men from his hands.

But damn, she couldn’t rip her gaze from his forearms. Tanned skin stretched over fibrous cords of muscle stacked in a thick pile. A pathway of veins coursed over them and disappeared beneath his cuffed sleeve. Most surprising of all was the thatch of golden blond hair sprinkling the expanse. She hadn’t paid much attention to the hair slicked atop his head. Now she saw the blackness for what it was, black grease to hide the shine of his boyishly light hair.

When he called her over with a tilt of his head she moved her ass, unprepared for another battle or to see those arms in action. The roller coaster of emotions over the last thirty minutes left her bone weary. As she cleared the island, her steps slowed and renewed energy coursed through her body. Saliva pooled in her mouth, better used exploring his body. The lips of her sex bloomed an invitation. The beat of her heart accelerated to the point of pain. Every gauge in her body blinked red. Warning. Danger. Run. Never before had she approached a man who saw through her as though she were his personal looking glass.

He held a clean, tanned hand out for her injury. Her eyes riveted on thick scar tissue bisecting the girth of his palm. It splayed like a red spider, a lump at the center with fissures sprawling in nearly every direction. She found his gaze and stilled her hand inches from his.

Piper didn’t know what he referred to, but the reassurance gave her the muster to move again. Before she could stop herself, the tips of her fingers skimmed the dune of pink marring his wide, callused hand. She slid along the scar until it ran over the edge and their palms met in an intimate handshake.

The shock of contact reverberated around the room like the concussive waves of detonation. His Adam’s apple bobbed on a deep swallow, telling her he felt it too. The pad of his thumb danced over the back of her hand. Her nerve endings wept at the tenderness. The heat she could handle, but the care speared too close to the center of her heart.

“I can’t…I can clean it myself,” she fumbled.

He tugged her against his side. “You’re right handed and probably wouldn’t clean it well enough to stave off infection. It’d be a shame to lose your shooting hand.”

“It hasn’t gotten infected yet.”

“Two months. Give or take a couple of weeks.”

The pack of weapons and ammo strapped to his torso gave a few inches of cushion. Still, the closeness pinged out her sensors, until he put her wrist under the water. The irritating sting she’d lived with over the course of her captivity was a gnat bite compared to this rattlesnake strike. Her eyes watered of their own volition. She tried to blink the tears away, but the bastards rolled down her cheek.

“How’d you manage to keep it clean for so long?”

“Gabrone took care of me.”

“I’ll bet he did.” The words growled from his throat.

“Not like that. He had a weird fixation and wanted me willingly. He didn’t want anyone else to have me either. It worked to my advantage.”

“What’s an LA cop doing in the middle of a Mexican cartel’s human trafficking ring?” The slanted gaze he flashed over his shoulder ruffled her already disheveled feathers.

“I’m not dirty, if that’s what your expression implies.”

Ryan placed her raw wrist back under the flowing water and scrubbed.

“Son of a puta. Que te den.” She screamed the insults and clamped onto the thick base of his bicep with her free hand.

“If you keep talking like that, when I’m done here I’ll have to scrub your mouth out.”

Piper clamped her lips between her teeth and howled at the ceiling. When she ran out of breath she refueled. “Sadomasochist.”

“I take no pleasure in your pain. Or my own.” His gaze found hers then dropped to his arm where her nails bit into his skin. “You know, the absence of something, a father, a lover, doesn’t mean it can’t hurt you.”

Piper struggled at his gut-twisting words, pushing against the hulking rounds of his shoulders with all her might. His hands twisted in her hair and firmed on her arm in a latch similar to that of a mating lion. Her nipples peaked beneath the fabric of her cotton tank, and she hated her traitorous body as much as the man inciting the reaction.

Megan was born and raised among the live oaks and shrimp boats of the Mississippi Gulf Coast, where her enormous family still calls home. She attended college at the University of Southern Mississippi where she received a bachelor's degree in curriculum, instruction, and special education. For several years Megan worked as a teacher in Mississippi. She married and moved to South Carolina and worked for an international non-profit organization as an instructor and co-director.

In 2009 Megan fell in love with books. Until then, books had been a source for research or the topic of tests. But one day she read Mercy by Julie Garwood. And Oh Mercy, she was hooked!

I enjoyed the excerpt, thank you.

Thanks for the post. I have a new author to check out!

I liked the excerpt, and have added this book/series to my book wishlist.