From Goodreads: "Where to start? This book had a ton of action, suspense, mystery, magic, and hot sex. The men were dominant, aggressive, and sexy as hell. It was written in multiple viewpoints and the author pulled the pieces together nicely. I enjoyed the unveiling that took place as relationship connections were developed and revealed during the story's progression. I love genies, by the way! " 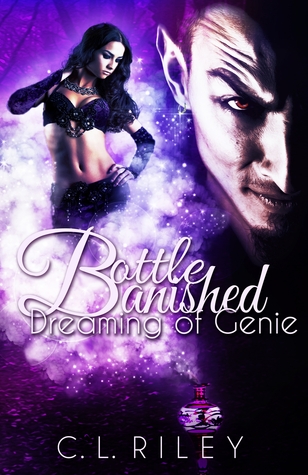 Genie thought learning how to “do” The Hustle was the worst thing about 1977, right along with strobe lights and disco balls, but she discovers something far worse the day she is bottle banished by an unsanctioned hunter obsessed with her destruction.

Thirty-seven years later, she is awakened from her spellbound slumber by a homeless alcoholic who wants whiskey not a wish. Overwhelmed with shame and keeping secrets from even himself, Reid Romans is the worst master ever.

He stinks. He’s dirty. He’s rude, but even more maddening; he’s sinfully sexy under all the filth and attitude.

When his green-eyed gaze captures Genie for the first time, she’s hooked, and being hooked on a human is not acceptable or allowed according to the genie rule book.

While Reid’s unsavory past bites hard at his heels, and he’s accused of a murder he didn’t commit, a powerful jinn is stalking Genie, intent on adding her to his harem. She has rejected him too many times to count, but he won’t stop until he claims her—body and soul.

Genie and Reid have way more than one love-sick jinn to deal with. A ruthless FBI agent; a cold-blooded cartel; and a hateful hunter, who wants genie back in her bottle, banished forever; keep them fighting for freedom and against the desire flaring between them.

Dark secrets, forbidden love, and simmering suspense take Genie and Reid on an unforgettable journey where the past and future collide and wishes run out.

Readers will uncover numerous references to current and past pop culture sprinkled throughout the story. Watch author’s website for contests connected to these references!

What if your wildest fantasy walked into your world …fangs or fur, and oozing sex appeal like warm honey on a hot buttery bun? Would you be ready for a taste?

That question is answered at some point and in some degree by every paranormal romance/fantasy heroine. There comes a point when her eyes are opened wide and an extrodinary world beyond the ordinary is revealed.

Imagine opening your kitchen blinds some morning and instead of your neighbor’s messy backyard, you see a giant beanstalk or mushrooms the size of skyscrapers, or, better yet, a hot, hunky, man-beast eager to sink his teeth into your neck and his you know what into you know where… STOP! Cold shower please!
That’s what happens when women meet Jinn Kûru in Bottle Banished: Dreaming of Genie. They definitely want his you know what. Now, granted, he doesn’t sport fangs nor is he covered with fur, but he does just fine without those added “accessories.”

Towering over 6”5 with a rock solid body, ripped with muscles, he’s a sight to behold. Add his clan’s tribal tattoo markings, inked with magic across his upper body and wrapped around and down his arms, and he’s one sexy beast of a djinn, or as most refer to him, a jinn. But it’s not just his looks that cause such a stir. It is the fact that jinns have a certain, sexual aura that makes them irresistible to human women. And once a human female experiences steamy sex with a jinn, she is forever doomed to crave his affections. No human male can come close to competing with a jinn. Add to the package his wish-granting ability and you’ve got one heck of a fantasy male at your disposal.

Remember, Kûru is an Alpha Male extreme. He. Will. Own. You.

I will confess; I’d be okay with him “owning” me for a night or two or forever. That’s the problem, resisting him would be futile (not that I’d want to). Only one female has ever spurned his advances, a genie named Genie. Now he’s found a human woman who seems to be immune to him as well. He wants them both and isn’t sure how to manage the consequences of claiming two headstrong women.

A native of Portland, Oregon, C.L. Riley has a son in college and a teenage daughter that keeps her on her toes at home. Her house is filled with books; something her kids, to her dismay, call clutter. She is working on book two in the Bottle Banished series and the Scorched Souls serial, a four-part, biker romance serial series.

Thank you so much for hosting a stop on my book tour! I will be back often!

koi fish tattoodesigns are regarded as one of the most popular and beautiful among tattoo designs, which are attributed to their large size