I’ve been itching to write about grim reapers for awhile. I miss the show Dead Like Me. I wanted my story to be completely different than anything we’ve seen or read about reapers. Imagine a story with grim reapers, dark angels, princesses, royalty, and the black plague! That’s just a taste of what Dead Girl Walking has to offer. 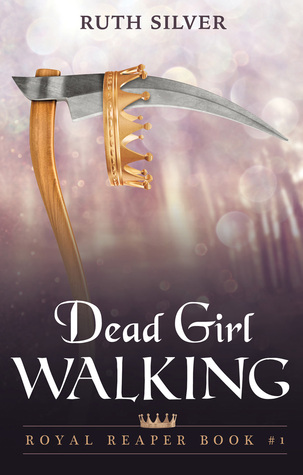 Princess Ophelia Dacre sneaks out of the castle to visit her boyfriend in secret. A perfect night cut short when she’s brutally murdered.

Ophelia is given the rare chance to become a grim reaper. She must become Leila Bele, cut ties with her old life, and follow the rules of the reapers. Her greatest adventure begins with death.

Now includes the prequel Ashes to Ashes as a bonus story in the Booktrope edition. Available in eBook & Paperback.

“Listen, kid, I don’t care what you believe in. It’s not for me to say what’s true and untrue, real or unreal. My assignment was you. You get to be one of us, if you want it. Otherwise, you move on, life is over, kaput.” Ophelia backed away from the stranger. For the first time, she realized she didn’t feel cold and wasn’t shivering. Is this what being dead was like?
“One of you?”
“A grim reaper.” He held out his hand to properly introduce himself. “Edon Montgomery, head reaper and old soul.”

*****
“Reapers are part of the undead. We’re not like the stories you’ve heard across cultures,” Edon said.
Violetta smiled. “We don’t ride on a chariot transporting souls to the underworld, or wear a black cloak, unless you want to make one.”
“Forget everything you know about grim reapers, Ophelia. Humans have it wrong. It’s easier to believe in angels and demons, than to see what’s right in front of you. Who wants to believe the undead walk among us with beating hearts? It would frighten humans. It would probably send many to their graves faster,” Edon said.

only .99 for limited time
Goodreads ** Amazon ** Barnes&Noble
About the author:
Ruth Silver is the best-selling author of the Aberrant trilogy. With a passion for writing and a love of story-telling, Ruth is actively writing two series: Royal Reaper and Orenda. Her interests also include traveling, reading, and photography. Her favorite vacation destination is Australia. Ruth currently resides in Plainfield, Illinois.

Do you have any plans to write a spin-off for Aberrant?
Yes! I am currently working on an untitled project that is a prequel, spin-off. I haven't spoken much about it, but I will say there is plenty of action and a world to explore that we've barely touched in the Aberrant trilogy.

What are you currently working on?
I've got several writing projects underway. Forget Me Knot (Royal Reaper 2) is in edits right now with an expected Spring 2015 release. I'm also writing steamy adult fiction under the name Ravyn Rayne, which will be available this year as well. You can find those projects on Ravyn Rayne Reads.

Do you have a full-time job?
Writing and marketing my own novels is my full-time job. It involves far more than 40 hours a week, but I love it, so I don't mind.