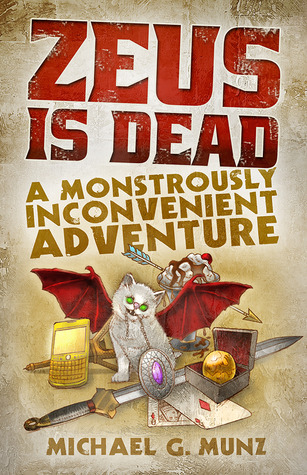 
The gods are back. Did you myth them?
You probably saw the press conference. Nine months ago, Zeus's murder catapulted the Greek gods back into our world. Now they revel in their new temples, casinos, and media empires—well, all except Apollo. A compulsive overachiever with a bursting portfolio of godly duties, the amount of email alone that he receives from rapacious mortals turns each of his days into a living hell.

Yet there may be hope, if only he can return Zeus to life! With the aid of Thalia, the muse of comedy and science fiction, Apollo will risk his very godhood to help sarcastic TV producer Tracy Wallace and a gamer-geek named Leif—two mortals who hold the key to Zeus's resurrection. (Well, probably. Prophecies are tricky buggers.)

Soon an overflowing inbox will be the least of Apollo’s troubles. Whoever murdered Zeus will certainly kill again to prevent his return, and avoiding them would be far easier if Apollo could possibly figure out who they are.

Even worse, the muse is starting to get cranky.

Discover a world where reality TV heroes slay actual monsters and the gods have their own Twitter feeds: Zeus Is Dead: A Monstrously Inconvenient Adventure!
GUEST POST
Mythology – an endless source of information


Before there was YouTube, before there was Facebook…
In the days long before movies, television, and magazines…
Before books themselves—heck, even before Amazon.com...

…there were still stories.

People needed to entertain themselves somehow, after all. Stories were created around ancient fires to explain, to train, and entertain. (Often, they were even told for reasons that DON'T end in –ain! Wild, I know.) There was no time or means to write such tales down. They existed only in memory, to be told and retold as time went on. They developed, and they grew richer. In a sense, it was like a world of nightly focus groups around a fire as storytellers workshopped their tales and modified them based on reactions.

And, eventually, the stories solidified. Time and cultural awareness elevated them to the status of legends and myths. They travel to us now out of the past, having weathered the centuries. Fascinating in their own right, the myths we know today also provide modern storytellers with a ready-made palette of plots, attitudes, and characters.
Now it's our turn to do the retelling.

Now we can take those mythological elements and put them in our modern context. Whether that's literally—such as in my own Zeus Is Dead: A Monstrously Inconvenient Adventure, which takes a humorous look at how the Greek gods would behave if they returned to the public eye—or placing such elements into an original fantasy world written with modern sensibilities, we have myriad choices.

How might Apollo rule a new world where he was the only god? What if Anubis and Hades went to war? What if Loki and Hermes met at a poker game? How would King Arthur and Merlin deal with Cthulhu?

And those are just possibilities from combining specific characters. Want to give it a satirical twist? Deconstruct it? Use mythology as a representation of our past to show how much (or how little) we've developed? Go for it! You can even roll the thematic concepts, archetypes, and tropes of mythology like dice across the modern table to see what inspiration turns up. It's akin to using a computer to create an image: it's done in a modern way, but the colors used are still the same colors that we've always known. (Okay, so that's an imperfect analogy, but hopefully you get my point.)

I'll close with another mention of Zeus Is Dead, if you'll indulge me. I've been fascinated with mythology since I was a kid, and a college professor later remarked that the Olympian gods were really just humans with supersized powers, skills, and egos. It struck me that here was a rich world of characters waiting to be thrown together again in new and interesting ways. (Plus, hey, public domain!) I vowed that one day I'd write a modern myth to explore those characters in a new light. It was a while before I'd developed my own craft enough to where I felt I could do them justice—and along the way I realized how hilarious it might be to show how they might deal with the modern world—but, eventually, Zeus Is Dead: A Monstrously Inconvenient Adventure was born.

And I do hope you'll all give it a read, and let it inspire you, too.


Goodreads ** Amazon **  Barnes&Noble
About the author:
An award-winning writer of speculative fiction, Michael G. Munz was born in Pennsylvania but moved to Washington State in 1977 at the age of three. Unable to escape the state’s gravity, he has spent most of his life there and studied writing at the University of Washington.

Michael developed his creative bug in college, writing and filming four exceedingly amateur films before setting his sights on becoming a novelist. Driving this goal is the desire to tell entertaining stories that give to others the same pleasure as other writers have given to him. He enjoys writing tales that combine the modern world with the futuristic or fantastic.

Michael has traveled to three continents and has an interest in Celtic and Classical mythology. He also possesses what most “normal” people would likely deem far too much familiarity with a wide range of geek culture, though Michael prefers the term geek-bard: a jack of all geek-trades, but master of none—except possibly Farscape and Twin Peaks.

Michael dwells in Seattle where he continues his quest to write the most entertaining novel known to humankind and find a really fantastic clam linguine.

Find out more about him on his blog. While there, it wouldn't hurt to get a FREE copy of Mythed Connections, the spiritual prequel to Zeus is Dead.

I think hercules would fare best in our world. Who doesn't love a strong man.

One of the characters in Zeus Is Dead, Jason Powers, actually has a reality TV show wherein he goes around the U.S. slaying some of the monsters that appeared on the scene shortly after the gods did.

I wrote him to be sort of a cross between Hercules and Mike Rowe of Dirty Jobs. :D

My thanks to Mythical Books for the opportunity to guest post!

I think Aphrodite would fair well. We are (sadly) a very shallow society. She could make a fortune on her beauty alone. Then, she could market products for face, body, hair, etc., and become a billionaire. Men would pay just to be seen with her. So would women, for that matter. Her life would be easy.

Gosh I don't no!! Most of the God's I am fimalar with, Want to be worshiped so I can't see any of them doing well... but if herculies was a God, He probally would do good, I agree with the other commenter, but I didn't no he was considered a god. thank you so much for the giveaway I need to learn more about the God's I like watching Atlantis it is a uk show it is great.. I look forward to reading your book thank you

Thanks for the interest! And you and I came to the same conclusion regarding Aphrodite, Michelle. In ZID, she's one of those getting the most attention.

And then of course there's "Aphrodite! Magazine." ;)

I want Hercules, haha! Thanks for the giveaway, by the way!

I think Hercules like a few of the other folks mentioned. He could really keep others off his back for sure.

Honestly, I am not sure, because they ALL have powers, but they are corruptible. Hmmmm...Diana if we were going thru an apocalypse.

Athena would fit very nicely in our world.

The question is which one would have us fare the best. None because it seems they all (like wishes) have a downside for humans.

Hercules would be an awesome fit to cut down on crimes

yea I guess I will go with everyone else, Hercules :)

Poseidon. Maybe he could give some insight on the global warming scare.

Ares.... cuz yeah, no one can keep Ares down for long. I mean come on, god of war.... totally a fighter, even with no worshipers, he'd come through.

Good question! I think Poseidon would fare best in our world. He has power over all the water and he could help us with a lot of problems that go wrong out in the ocean.

I'm thinking Apollo. In this world of self centered people who are more worried about what's on the outside and not on the inside, he would fit in perfectly!

I think Hercules would do great.

Apollo.. the Greek God of Love.. we need more love in this dark world.