Giveaway: Out of Agony (Starting Over Book #4) by Lynette Endicott 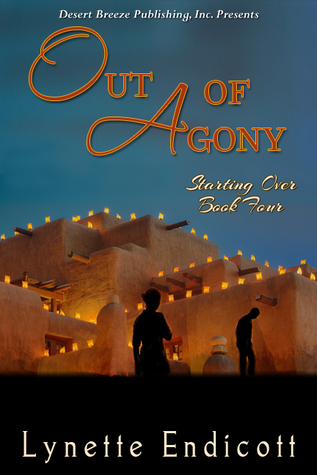 
Brian Van Pelt has barely survived an anguished year of loss, hiding his sorrows under the facade of a cool and uncaring attorney. Not able to deny his grief any long, heartache drives him to collapse and his life takes an unexpected turn.

When Jessie Ingram comes to work at his law firm, she is intrigued by the conflicting darkness of Brian's behavior and the tender inconsistencies that hint at something deeper within him.

Despite her interest, she has her own pain, supporting her niece Sara, who has a virulent cancer with aggressive treatments that take such a toll they would not be worth it — except they are Sara's only hope of survival.

Will life’s hardships bring Brian and Jessie together? Will they be able to heal and possibly find love?

Out of Agony is a good read. The characters and story is well written and strong. Lynette does an amazing job at painting a picture with just enough detail to keep you interested and turning pages. The only downfall for me is that it reads too quickly. (Goodreads)

Lynette Endicott grew up in Illinois, met her husband in Western Nebraska, lived 25 years in Kansas where their daughter was born, and has been in Fresno, California since 2000. She has a son-in-law (who lives with her daughter nearby), and has rescued a dog, a bird and three cats. She and Ollie, her terrier mix, volunteer as a team at the local library, where children read to the dog.

At a youth camp when she was 14 the editor and teacher of a writing class challenged her to submit something to his youth magazine. She did and it was the first of 10 articles and stories accepted by the publication over the next few years. Nothing like front end success to keep her writing! Lynette enjoys reading contemporary romance and speculative fiction and writes both. Her debut book, Starting Over Book One: More Than A Job, and two more books in that series, The Return of Joy and Finding Her Voice are available now. The first three of the Time After Time Saga with Tami Dee are available now, including Animal Instinct, Survival Instinct and Pioneer Instinct. The fourth in the series of six, Protective Instinct, will release in August 2014.

Because she didn't have pets until after her 50th birthday the animals she enjoys find their way into all her books. Usually you will also find a character with a disability as part of the day-to-day fabric of the story. In More Than A Job, Paige works in services to people with disabilities until she loses her job and starts over. In The Return of Joy, Atlas, the yellow lab, becomes a Therapy Dog. In the Time After Time series animal helpers assist the hero and heroine in all six of the books in the series.

Lynette loves hearing from her fans! Please connect with her on:

Thanks for featuring Out of Agony and the rest of the Starting Over series. I think Brian's story resonates for all of us who face life difficulties and have to keep on going.