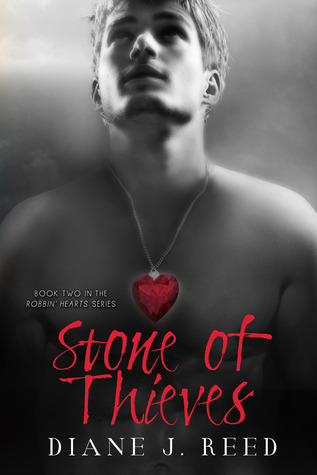 The Stone of Thieves . . . for centuries its magnetic draw has twisted the hearts of ambitious men and women with the promise of power, passion, and intrigue until it fell into the hands of unlikely thieves Robin and her boyfriend Creek. But can they steal their destiny away from the curse that pursues this magnificent ruby heart? As the stone begins to spread its sorcery, Robin races to find her long-lost mother in Italy in the hopes of discovering the truth about her unique gypsy heritage and the ruby heart that is rumored to steal souls. Yet when the desire for this stone by powerful members of her family threatens their very lives, Creek decides to take matters into his own hands to protect Robin, his greatest treasure of all . . .

Stone of Thieves is a sensual, stand-alone new adult novel and the sequel to Robin in the Hood in the Robbin’ Hearts Series.

“Is it any wonder I became a bank robber?”
But she never dreamed she’d fall in love…

Wealthy high school student Robin McArthur thinks she has it all figured out when it comes to bilking her wealthy dad for guilt money as a substitute for his genuine affection. Until one day he suffers a stroke, and she learns the brutal truth:
They’re broke.
Her stepmom has skipped the country.
And everyone from bankers to bookies has lined up in her dad's hospital room to collect on the millions he's racked up in debt.

Panicked and desperate, Robin figures she has two choices. Either surrender to the pestering caseworker and live in a skanky foster home, or take a chance and sneak her dad out of the hospital to make a run for it. Little does she know that stealing a car and hitting the road means that before the day is through, she will rob her first bank.

Now an outlaw, Robin finds a backwoods trailer park to hide her dad from authorities. There, she encounters Creek, a local bad boy who also commits crimes to provide for their motley neighbors. Realizing she could use Creek’s help, Robin proposes an ingenious plan—they should team up to rob banks together. But when their partnership leads to a romance that turns Robin’s world upside down, she soon begins to discover that people are more precious than pocketbooks, and real love means opening your heart to the kinds of treasures money can’t buy…

The elite Pinnacle Boarding School for Girls is renowned for keeping away far more high school applicants from its hallowed halls than it lets in. But lately, someone has been lurking in the shadows, writing cryptic messages on mirrors, and putting people’s lives in peril. When Robin and Creek begin to suspect that this otherworldly guest may have a connection to a tragedy in Creek’s past—and isn’t about to go away anytime soon—they return to Robin’s Alma Mater to try and uncover the truth behind the mysterious spirit’s rage. What they discover is a love story for the ages that leaves them breathless and inspires healing and hope for all those who dare to believe in miracles.


And all that’s left at my feet is his shiny black mask.

Diane J. Reed has a Ph.D. in English and a lifelong passion for books—both popular, forgotten and literary—as long as they touch her soul and make her want to tuck them under her pillow at night to remember them in her dreams. She writes novels that are infused with enchantment, where characters dare to break through boundaries and believe in true love. She also has a soft spot for artisans and outlaws of the heart, those who burn brightly to live each day as a gift—because it is! In addition, Diane J. Reed has conducted 13 interviews with the cast of the hit TV show Once Upon a Time. Feel free to visit Diane J. Reed’s website to share your love of books and the whispers of your spirit.

Stone of thieves sounds very exciting, I would like this book.

I love all the extra swag you are giving away, I think the books sounds excellent too!

The expert was very good.

Wow, I can't wait to read this, it sounds soooo good, I wanna no more about that stone, the excerpt was amazing, and the giveaway is totally great too!! Thank you so much

Sounds like a great book. Thank you for the giveaway!

Thank you so much everyone, and a huge thank you to Mythical Books for featuring Stone of Thieves on your blog!! Wishing all of the entrants good luck for the giveaway :D

Thanks for the giveaway.

Thanks for the giveaway.

Thank you to everyone & have a happy summer of reading!

Thanks a ton!! And awesome review!

Oh my gosh!! Robin Hood was one of my favorite stories growing up!! I can't wait to read this take on it!!!