Guest Post and Giveaway: Curse of Prometheus: A Tale of Medea by Morgan St Knight 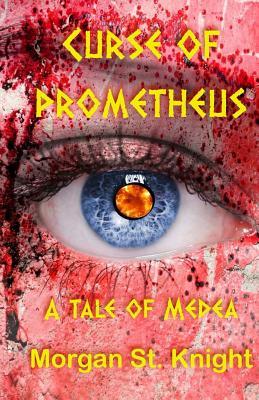 The ancient world's most notorious sorceress has just become the modern world's only hope for survival.

How do you fight a god of light who has been seduced by darkness? That’s the challenge Medea Keres must meet. Posing as a wealthy young heiress in modern day Atlanta, no one knows she is the original Medea, the sorceress from ancient Greek legends.

As priestess of the witch goddess Hecate, Medea is charged with hunting demons that would otherwise overrun the world. Now she must face a far greater adversary. One of the twelve shining Olympian gods has turned rogue, violating the edict against human sacrifice. As the body count quickly rises, Medea knows her enemy is getting stronger.

With the help of the underworld nymph Orphne and the hero-god Heracles, she must find a way to unmask the evil so that the other Olympians will take action.

But as she probes deeper into a blood-soaked labyrinth of suspense and intrigue, Medea finds a net of deceit and treachery that will require all of her cunning to escape.

I heard it more than once when I told friends I was writing a book in which Medea was the heroine: “Good luck. No one is ever going to buy it. She killed her kids to get back at her husband.”

So why did I choose Medea to save the world from a god gone mad? Well, come on, you can’t get more badass than Medea! In ancient mythology she flies around in a fiery chariot drawn by dragons (how’s that for a visual if you’re trying to sell a screenplay version of your book?) takes on monsters that even the bravest heroes can’t subdue, and stands up for herself when she’s wronged.

To understand why Medea is such a compelling figure, you have to look past the popular one-dimensional image of a vindictive, scheming witch who was motivated solely by lust for the hero Jason.

Let’s start with her innate power, which stems from her birth. She is the child of King Aeetes, the son of Helios. Medea’s mother is the nymph Eidyia, who was the daughter of the Okeanos and Tethys. So, between being the daughter of a nymph and the granddaughter of three Titans, Medea has plenty of magic in her blood. Add to that Medea’s role as priestess of Hecate, as described by Apollonius of Rhodes in the Argonautica, and you’ve got a pedigree for success in sorcery.

An excellent illustration of her abilities comes in the Argonautica, when the Argo is threatened by the bronze giant Talos. Jason and the rest of the crew want to beat a hasty retreat, even though they need to make landfall in Crete to replenish their supplies. Medea single-handedly uses her magic to kill the supposedly invulnerable Talos. She had already subdued the dragon that guarded the Golden Fleece so that Jason could obtain it. In both cases, she is able to beat opponents that even the most accomplished warriors were powerless to vanquish.

Unfortunately other aspects of her story often overshadow her bravery and skill. Medea is frequently portrayed as a cold-blooded murderer, but in most cases the deaths she brings about are for justice.

When she tricks the daughters of the usurping king Pelias into killing him, it is not just for spite, but because Pelias went back on his promise to relinquish his throne to Jason, the rightful heir, after Jason succeeded in his quest for the Golden Fleece. When Jason plans to leave Medea, she destroys the princess of Corinth (his mistress) as well as the princess’ father King Creon. Certainly both the princess and king knew Jason was married and had children. In being willing to break up Medea’s family, Jason, the princess and the king all shared the blame for a shameful deed.

Medea is just as ready to help as to hurt. Of course there’s the help she gives Jason so that he can win the Golden Fleece, but she extends her kindness to others as well. Ovid describes how she restores Jason’s aging father to youth with a magic potion after flying across the world in her fiery chariot to gather rare herbs. You could easily view her as the pre-cursor to the modern cosmetic surgery industry! Other stories relate how she used her knowledge of herbs and magic to cure the Athenian king Aegeus of infertility, and heal Heracles (Hercules) of a blood-madness that caused him to kill his own sons. Thousands of years ago, Medea was able to address illnesses which modern medicine has only been able to tackle effectively in recent decades.

Of course the elephant (or chimera) in the room is the deaths of Medea’s children. Typically, she is blamed for killing them to spite Jason after he spurned her for the princess.

There are many variants of Medea’s myth, and the earliest ones do not show her committing filicide. In the early versions of her story, her sons either die by accident or don’t die at all. The idea that Medea herself killed them gained popularity because of the play Medea, written by Euripides. But even in ancient times there was disagreement. Didymus says the relatives of Creon killed the children in revenge for the deaths of the king and princess, then blamed Medea for the horrible crime.

How do we remember Medea today? Unfortunately, most people still view her as a nasty, scheming woman who is evil, evil, evil. I will give some props to the 2000 TV movie “Jason and the Argonauts” for toning down the malicious aspects of Medea’s character, and giving her and Jason a happily-ever-after ending. Pier Paolo Pasolini’s 1971 film version of Euripides’ play was filled with surrealistic scenes, but Maria Callas’ performance was the true masterpiece. She gave such a sympathetic portrayal of Medea as a woman torn apart with grief and betrayal that you could almost, almost forgive her for killing her sons.

I admit, I’ve got an uphill battle in my quest to rehabilitate Medea’s image in my book. Maybe the best I can do is portray her as a real, multi-dimensional character who has strengths and weaknesses, a good side and a bad side. Instead of trying to totally vindicate her, I’ll settle for making the extraordinary just a little more ordinary so that you, the reader, can see her as who she’s been all along: a person.

TOUR SCHEDULE
Goodreads ** Amazon
About the author:
Morgan St. Knight live in Atlanta, and is a lifelong student of mythology, the occult, and comparative religion. With more than 25 years of experience as a journalist, Morgan enjoys the occasional foray into fantasyland to escape the grim realities of life. He is currently working on the sequel to "Curse of Prometheus" and is developing a second paranormal series which also takes place in the South.