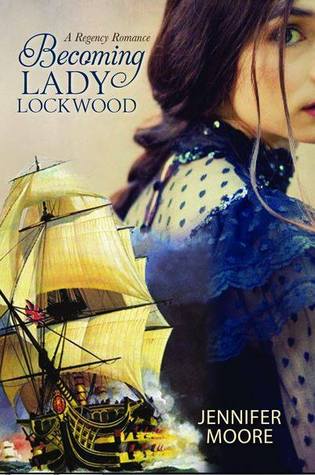 Amelia Beckett is delighted to be a widow. Married by proxy to a man she'd never met, Amelia recognizes that a fortuitous entry into widowhood frees her from meddlesome chaperones and matchmakers. Heiress to her mother's sugar plantation in Jamaica, she happily anticipates working in a man's world, with the additional credibility of her new title: Lady Lockwood. But with the arrival of Captain Sir William Drake, her plans quickly go awry...

William has traversed the Atlantic with one purpose. If he cannot prove that Amelia's marriage to his brother was a fraud, she will be entitled to a sizeable portion of his family's estate. He is determined to return this duplicitous "Lady" to London for an official hearing, and he carries with him a letter that will ensure her cooperation...

Left with no choice, Amelia joins the captain on his return voyage to England, and the two quickly find that ship life does not allow for evasion. Amelia and William are ceaselessly thrown together, and amidst fierce storms and ocean battles, what began as antipathy seems to be evolving quite unexpectedly. But as they draw ever closer to their destination, will the impossibility of their circumstances shatter any hope of a future together?

Since I'm not an expert on the topic of reader trends or anything, I'll just focus on what appeals to me.
When I read Historical Fiction or even Nonfiction, I like to imagine myself living in that time. What would I be like? Would I be a servant? A princess? How would I react when Napoleon invaded my small Spanish village? Or when Blackbeard held the city of Charleston under siege? The appeal to me--and I suspect to most people-- is learning about history, but more than that, learning about what regular people were like, how they lived, and how the history affected them. I love coming away from a historical novel feeling like I learned something.

Now, Historical Romance--specifically Regency Romance--in my opinion, the reason this appeals to us is because of all the rules of the time. Of course a Duke needs to marry a woman of equal standing so they can produce an heir with a spotless bloodline and unite two wealthy families. He won't be looking for a love match, but an investment in the future of his line. His posterity. But, just what if...? What if he happens to meet a milk maid by the side of the road when his carriage breaks down and ...you know the rest. We love that we understand the rules, we know that marriage for love was rare, but we hope that the rules will be broken. That's my opinion, anyway. That's what I love in a Regency. The opposites attract and one or both are willing to dare the disapproval of society to be with the one they love.

I don't know if any of that made sense. I'm sort of rambly.

About the author:
Jennifer Moore is a Passionate reader and writer of all things romance, helping her find balance with the rest of her world, which includes a perpetually traveling husband and four active sons, who create heaps of laundry that are anything but romantic. Jennifer has a BA in linguistics from the University of Utah and is a Guitar Hero champion. She lives in northern Utah with her family. You can learn more about her at authorjmoore.com. The author's first book, Becoming Lady Lockwood, is a regency romance centered on the British navy during the Napoleonic Wars of the early 1800s.

I like so much the guest post. It's short but the author managed to make her point.
I'm pleased that she wants from a historical novel to learn something. I want that too.
Oh, and the cover is great. The lady, Amelia I suppose, is adorable.