Excerpt and Giveaway: Her Temporary Hero (Once A Marine #2) by Jennifer Apodaca 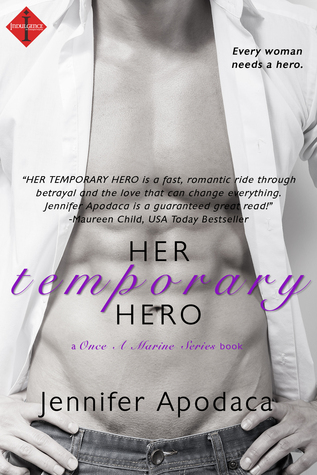 Former beauty queen Becky Holmes and her baby are on the run from her dangerous ex. With her dreams of love and marriage destroyed, she’ll do anything to protect her child…even agree to hide out in her boss’s cousin’s house while he’s away.

Wealthy, sexy, and emotionally haunted Logan Knight needs a temporary wife to get his land, per his dad’s rules. No wife, no inheritance. But when that wife lands on his doorstep and comes with a baby, his darkest memories are triggered. He tries to keep his distance, but his efforts are shattered when he starts to have real feelings for his fake wife and child.

Just as Logan begins to think he may have a future with Becky, his attempt to have it all backfires into a betrayal that forces Becky into a heart-wrenching choice no woman should ever have to make.

Seeing Adam Waters is the last thing veterinarian Megan Young expects. Ex-Marine. Ex-boyfriend. And still extremely dangerous territory. But Adam doesn’t know the secret Megan has been keeping from him. The secret that was created three years ago, after their last night together...
Adam returns to Raven’s Cove to sell his home in a final break with the town and memories that haunt him. The problem is that his attraction to Megan is as blazing hot as it ever was. But when a vicious smear campaign against Megan turns ugly, Adam learns the truth he never knew—he has a son.
Now the only way Megan can protect her child is to strike a bargain with Adam. And it’s a bargain that looks a lot like blackmail...

“Diapers are expensive, baby girl. What do you think about giving them up?”

Becky Holmes smiled at her daughter perched carefully on her hip, while dropping the precious diapers in the backseat of her weathered Toyota Corolla. Three months of experience had taught her to handle almost any task one-handed. Sophie babbled her answer while Becky secured her in the car seat. The baby’s intense hazel eyes flecked with gray were full of mischief.

“Is that a no?” Fixing the shimmering lilac bow on her oh-so-kissable bald head, she laughed. “Then we’d better get home so I can work on that pageant dress, now hadn’t we?” Setting a cloth book on Sophie’s tummy, she backed out and closed the door. Once they got home, if the baby slept two hours, then she’d be able to finish the dress. With luck, she

Her back hit a warm object. Not a car. A man.

Elemental fear shot down her spine. Becky forced herself to breathe and angled her head enough to catch the reflection in the window of her car. Oh God. Fisting her car keys, she spun around and faced the man who’d put her in the hospital a year ago. “Dylan, you’re out.” Of prison. This couldn’t be happening. He’d taken a plea deal for a hit-and-run accident and been sentenced to a few years in prison. It’d only been five months since he went away. But there he stood, five feet, ten inches of boyish charm, unchecked arrogance, and a carefully cloaked snake-mean streak.

She was terrified of Dylan.

His sky blue eyes flicked past her to the backseat. “You’re such a cliché, a dirt dumb ex-beauty queen. Of course I’m out. I’m a Ridgemont. By this time next year, that conviction will be overturned, and the state of Texas will be paying me for their grave error.”

Culture and education flowed through his voice. But he wasn’t totally wrong—she had been dirt dumb to believe that son and heir of the Ridgemont Empire had fallen in love with the scholarship girl from the trailer park. Even dumber not to see the signs of his vicious side. But she’d wised up and wasn’t letting him hurt her baby.

“Okay.” She needed to keep him calm and get away. What did he want? Becky looked around the grocery store parking lot, but there was no one to help. “I don’t want to keep you if you’re heading into the store. I need to get going.”

Dylan curved the left half of his mouth. “Back to your trailer with the new For Sale sign that your ugly ass dog likes to pee on? Or are you taking my kid to work with you tonight cleaning the Wyatt Medical group offices? You don’t go to work until much later, so maybe you’re going to your mom’s new digs at the cemetery?”

Chills skittered down her spine. Greasy sickness coated her mouth. He knew where she lived, worked, and that her mom had died. “You’ve been following me.” The words spilled out and her fear ratcheted up. And up. Until it pounded in her head with the beat of, run, run, run.

Dylan leaned in, slapping his hand on the roof of her car, lowering his voice to a whisper. “I have people to do whatever I need done. I know exactly where you are at all times in case I want to finish what we started the day you ratted me out to the cops over a useless bum that no one gave two shits about.”

“You’ll go back to prison if you touch me.” Becky leaned against the door to keep baby Sophie safe from her father. That whole terrible night replayed in her brain…but the worst of it had been his cold callousness after he hit the man with his truck. Dylan had left him on the street in a pool of blood, driving away with Becky screaming in the passenger seat.

No, don’t think about that, stay focused.

“Keep telling yourself that.” He leaned so close she smelled coffee on his breath. “Oh, and you’d better start saying your good-byes to the brat. I have a team of lawyers working on getting full custody of the kid. You caused me major problems with my family by having it.”

What? No! “You won’t win.” She wrapped her arms around her stomach, desperation hammering up her spine. The thought of Sophie in his care was too much. Too awful. Losing Sophie would kill her, but her real fear was for her child’s safety.

“You tried to destroy my life by ratting me out and having that kid after I told you to get rid of it. Payback’s a bitch.” He turned and strode off.

Becky ran around her car, jumped in, and locked all the doors. Her hands shook so badly she couldn’t get the key in the ignition. In the backseat, Sophie gurgled and tried to pick up the book in her fat fists.

Oh God, what to do? Run, but where? How? Her best friend, Ava, lived in a tiny place with two other girls. She couldn’t go there. Maybe a shelter? Leave Dallas, or the state of Texas altogether? Finally getting the key in, she started the car and got them on the road. She hurried home, watching her rearview mirror the entire time.

Was Dylan following them? How long had he been watching them? She needed the money from the sale of the trailer to make a new life for her and Sophie. Or pay lawyers
if it came to a custody battle.

She’d thought she had more time, but she’d been wrong. She had to find a safe place to stay while selling the trailer. There was only one person Becky could think of who might be able to help—her boss, Lucinda Knight.…

About the author:
Award winning author Jennifer Apodaca grew up in Southern California and met her very own hero at the dog pound. She worked there, he came in on a business, and it was puppy love. They married and had three wonderful sons.


While her husband worked on his master’s degree, Jen did the mom thing by day and went to college at night with the intention of perusing a marketing degree. But her true passion was writing. With time at a premium, she had to make a choice.

Choosing writing, and with the full support of her husband, she poured herself into her dream. A mere eight years later, she published her first book DATING CAN BE MURDER. In her career, Jen has written a fun and sexy mystery series and a variety of contemporary romances. Taking the pen name of Jennifer Lyon, she also created a dark, sizzling paranormal series, and most recently, The Plus One Chronicles, an emotional and sexy adult contemporary series.

Jen has achieved many of her dreams except for attaining a self-cleaning house, a latte delivery service, and finding the holy grail of nonfattening wine and chocolate. She can live with those disappointments as long as she can keep writing the stories she loves to share with readers.