When the World Ends... by J.J. Marshall 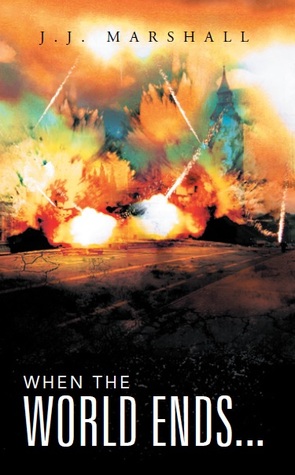 "We're here as a terrorist cell looking to bring down the Board of Officials that essentially controls the entire Human Race. Those on Earth may have their own figures of authority in the Spheres but whether they ultimately live or die depends on decisions that the Board make. If we take them down then Humanity after they're gone can only be better"

At the dawn of the 22nd Century, the Earth is dead. A lethal alien organism has rendered the planet uninhabitable and a small fraction of humanity has retreated to Space and the Moon. Those that remain on Earth are trapped in huge Spheres that encompass entire cities, tinted to defend against the deadly UV radiation that the atmosphere no longer protects Humanity from.

17-year-old Alec Corbett lives aboard the adapted International Space Station. One ordinary day in his mundane life he transforms his potential when he discovers information that could expose the corruption of the Board of Officials that now controls humanity. Armed with nothing but knowledge and his friend Jonah Jones by his side, Alec's righteous judgement leads them on a merciless and unforgiving path.

For there is one key problem - the information comes from his father Landon Corbett; a member of the Board. Pitted against his own flesh and blood, Alec finds himself in a unique position to end the Board of Officials' dictatorship over Humanity. However, all is not as it seems and as the stakes grow increasingly higher, Humanity reaches the brink of all-out-war.

Only Alec and his group of friends can peacefully negate the situation, but it all depends on whether or not anyone will listen to a 17-year-old boy.

"I am currently studying a B.Sc. Physical Geography Degree at the University of Reading in Berkshire, England, with the intention of pursuing a career in teaching secondary school pupils. I was born and raised in England and am presently twenty years old. "When the World Ends. . ." is my first publication and I'm incredibly excited to be working with the people at AuthorHouse in bringing my story to real, tangible pages! Writing has always been a hobby and a passion of mine from a very young age; I can recall writing a novel on my first family computer which was inspired (as well as a being blatant rip-off!) of J.K. Rowling's Harry Potter and the Philosophers Stone. It was really this book; the first full novel I had ever read by myself, that inspired me to write for myself and to create worlds beyond our own and fictions that can redefine the past or give suppositions about the future. I would list J.K. Rowling as one of my top inspirations, as well as the likes of Anthony Horowitz, Ian Banks, Charlaine Harris and Suzanne Collins. I also draw inspiration from T.V. shows and scriptwriters, such as Joss Whedon, J.J. Abram, Maurissa Tancheroen, Steven Moffat and Jane Espenson. Their work and the way that they construct characters and stories spur and challenge me to create my own little realities. So welcome to one of my little realities! I hope you enjoy it.