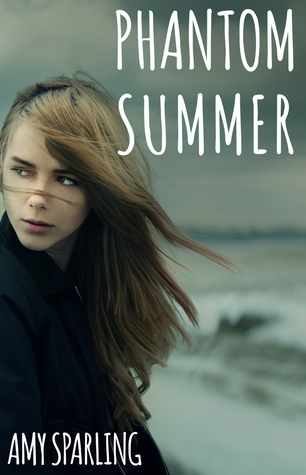 Seventeen-year-old Taylor Gray moves to Sterling Island to get over her dead boyfriend. Mom’s cool with letting her crash on the couch, but Taylor needs to get a job before the lights are cut off again.

When the tall, dark and crazy Raine Tsunami offers her a position at his thriving ghost tour business, she figures it’s an easy way to make some cash. Taylor isn’t afraid of ghosts--that crap is as fake as her mom’s boob job. She loves their adventures on the historic island, especially the secret places he shows her when the crowds go home. So what if all the ghost stories are just legends?

When Taylor comes face to face with a ghost and Raine crosses the line between friend and boyfriend--Taylor’s new life collides with her haunted past. If murdered people end up as ghosts, then that someone she was trying to forget is probably watching her.

GUEST POST
5 Reasons it’s Great to Have a Pen Name from Cheyanne Young, writing as her pen name Amy Sparling

5. You can create your own authorly-sounding name. Does your real name suck? Is it hard to pronounce or spell and would make it difficult for potential fans to find you? Pick your own name. Make it awesome.

4. You can write in different genres. Want to write kid’s books and adult books? Get a pen name. It helps you market yourself with two different brands and it also prevents readers of one genre (ie- kid’s books) from looking up your other books and accidently reading something in a genre that’s not for them.

3. Secrecy. This doesn’t necessarily mean you have something to hide. Maybe it does. Maybe you write erotica and don’t want your family to know. Or maybe you are simply a shy person and aren’t ready for the world to know you’re an author. This was more of why I chose a pen name. It’s hard putting yourself out there knowing you can be rejected. Pen names allow you to publish without losing a piece of yourself.

2. You need a second chance. Did you jump the gun and self-publish the first piece of crap you wrote? Do you have unedited, plot-hole-ridden, embarrassing stories out there? This happens to more indie authors than you think. Too many writers see the successes of other indies and think they can do the same thing. This causes them to publish too quickly and too carelessly, resulting in terrible sales and a ton of bad reviews. Once you pull yourself up from the ground and realize that being a writer is actually hard and requires patience and work, you don’t want to publish your next book under the same name. Use a pen name and start fresh.

1. Because it’s fun! You don’t need a reason to make up a name for yourself. We’re writers. Making up stuff is what we do.


I drive through the remnants of what used to be a gated entrance. Now the metal gate lies on the ground, weeds having grown over it. Mom's place is number 336-A. I park in the visitor section closest to Mom's address and step out of the Ford.

As I slam the truck door behind me, the smell of salt in the air fills my lungs. Waves crash on the shore, and seagulls…well I'm not sure what kind of sound they make overhead. A quack-ish type of caw. It's unlike any other bird's song I've ever heard.

The shabby buildings are long overdue for a new paint job and many of them have blue tarps nailed over sections of the roof. People usually do that when a hurricane comes through and blows off shingles, but it's a temporary solution. We haven't had a hurricane in over four years. Please, please let the inside look better than the outside.

I grab my backpack and suitcase and drag it up to Mom's door, tapping on it with my keys. The door swings open and a thin woman with white-blond hair stares back at me. She's wearing a purple bathrobe and has a cigar in her hand. Shit, I'm at the wrong address.

"Hey babe, I didn't expect you so soon." She puffs from her cigar and swings open the door.

"Mom?" I say, as she grabs me in a one armed hug. My mom has dark brown hair like me and a beer gut. At least, that's what she used to look like. She pulls my suitcase inside for me and closes the door behind us.

"Let me get a look at you." She grabs my shoulders with her bony fingers. "You're so different. All grown up."

"Yeah, you too," I say, studying this woman who does look a little like my mom. She has the same butterfly tattoo on her chest. Even still, I can't shake the feeling that I walked into the wrong apartment, that I'm standing here being embraced by a woman who isn't my mom.

Two seconds later the loving moment is gone. I watch Mom’s lipstick smudge onto her cigar as she takes one last puff and snuffs it in an ashtray on an end table. "I go to work at four, so you'll have the place to yourself all night,” she says, winking at me.

Mom shows me the kitchen, complete with microwave, and the bathroom and the living room with a two-seater couch which will now be my bed. "Maybe we can get you an air mattress or something," Mom says, kicking at the springy cushions with her slipper.

The old me would have freaked out if I had to spend a weekend here in Mom's living room. The old me liked having her own room, with her own bed and all of her stuff. And her best friend and lover living next door. But that's the old me. The new me doesn't mind all of these new changes.

I sit on the couch and place a smile on my face. Okay, well maybe now that I've pointed them out they kind of bother me. Sleeping on a couch? Oh well. Brendan doesn't get to sleep in his bed either. He gets to be dead in his coffin. And that thing didn't even have padding like this couch. I know because I left a copy of the Denali user's manual in his coffin when no one was looking. He wanted a Denali so bad, but as an eighteen year old he didn't have the money to spend on luxury motorcycles. I figured in the afterlife he could at least read about one.

But that was Old Taylor. And Old Taylor doesn't exist anymore. She has left the building and wants me to get acquainted with New Taylor. New Taylor lives in Sterling with her mom, and she's not afraid of anything and she has no regrets in life. New Taylor won't remember Brendan.

Goodreads ** Amazon ** Barnes&Noble
About the author:
Amy Sparling is a native Texan with a fear of cold weather and a coffee addiction that probably needs an intervention. She loves books, sarcasm, nail polish and paid holidays. She lives near the beach with her daughter, one spoiled rotten puppy and a cat who is most likely plotting to take over the world. Amy Sparling is a pen name for YA author Cheyanne Young.

Sounds amazing! Can't wait to read it. Thank you for the giveaway.

Looking forward to read this book. Love the cover book. Thanks for sharing :)

Can't wait to read this book, thanks for this giveaway :D

Have added to my TBR.. crossing fingers just in case ;)

i want to read the book...sounds a great book.