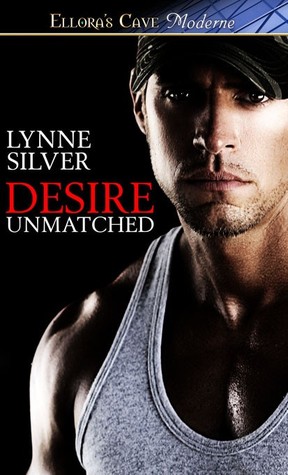 Book four in the Coded for Love series.

Genetically enhanced soldier Xander Bristack has spent his life under the imposing rule of his dictatorial, controlling father. Under his father’s watch, he is the Program’s deadliest and coldest killer. But when Xander is kidnapped by enemies of the Program, only one thing motivates him to escape. His true match, the sexy Emma Harrison.

He’s been obsessed with Emma from afar, yearning to have her in his life and in his bed, but knowing he should never involve the beautiful blonde in his messed-up world. However, when Xander breaks out of his prison and returns home, Emma refuses to let him keep his distance, enticing him to surrender to the heat between them. She teaches him that passion trumps duty and love doesn’t mean blind obedience. His desire for her cracks the shell he’s hidden in his whole life.

GUEST POST
Creating the perfect man:
(MB's topic)
In Desire Unmatched, my book out now from Ellora’s Cave, the hero, Xander Bristack is a genetically enhanced soldier. He can’t shoot webs out of his wrist or turn green and scary when angry, but he does have a brain that processes information faster, lungs that keep him running longer and swifter and muscles that can lift greater weights. Cool right?

But what if I went really sci-fi and could design my own perfect man? Hmm? What fun! Let’s try it together. My perfect man would be around 6’2”, any taller and we couldn’t dance well together. Then again, my 5’10” husband fits against me perfectly. So let’s remove the height thing. As long as the guy is taller than me wearing heels, we’re good.

I’d like him to have washboard abs, and 8 pack, though I’d settle for 6. Hair color is negotiable as is eye color.

Most importantly, my perfect hero would listen without trying to solve my problems. He would never tire of giving me back rubs. He’d be a computer genius and be able to fix all my tech needs without any eye rolling or sighing.

Ooh, he’d be a gourmet cook, but his food wouldn’t be fattening. And he’d make me laugh till I peed my pants. Oh, and maybe he’d me some kind of ninja/martial arts expert so we could walk through any neighborhood at night without fear.

By reading any further, you are stating that you are at least 18 years of age.
An Excerpt From: DESIRE UNMATCHED
Copyright © LYNNE SILVER, 2013
All Rights Reserved, Ellora's Cave Publishing, Inc.
“Oh, you startled me,” Emma put a hand to her chest. “What are you doing here and why are you sneaking around?” She was in the large main office storage room, putting things in boxes and helping to organize the chaotic room. Her hair was piled in a loose bun on her head, and sweat dampened her dusty pale-pink blouse. Nice of Xander to stop by now when she looked a fright.
Xander watched her soberly for a minute. “I heard you’re looking for a job.”
She nodded. “Yep. I don’t want to be a mooch. Everyone around here has done so much for me. I hate to keep taking without giving back.”
“So that’s why you’re inside on this gorgeous day up to your ass in dusty boxes of shit we’ll never need again?”
Way to make her feel useless, but she answered him anyway. “Yes. I overheard Shep complain he couldn’t find anything in this mess. I volunteered to help out.” She didn’t understand why after nearly a month of ignoring her, he was seeking her out now, but she finally had him alone and didn’t question his motives too hard. It was pathetic how much a single word from this man warmed her insides. Even without the blood work, they both knew they were a match. After her horrific kidnapping ordeal, she wanted the connection and the safety of belonging to someone. No, not simply someone. Xander.
“Will you look for a job off campus or on campus?”
“Off probably, and I want to take classes at the university. I hadn’t realized it was down the street.”
For some reason this made him scowl. Idly, she noticed his buzz cut was longer than she’d seen it. Normally he kept it at army recruit length. Today it was practically hippie length at two inches long. He looked good to her no matter his haircut.
“I didn’t finish my degree, remember, Xander?”
“I forgot how young you are.”
“I’m twenty-four. I took a year off between school and uni.”
“And I’m thirty. Like I said, you’re a baby.”
“Is that what has you keeping your distance? Afraid you’re robbing the cradle?” Her bare knee brushed against one of the many cardboard crates she sat among.
“Among other things.”
“Such as?”
He didn’t answer, but she hadn’t really expected one. Xander was a man of few words and even fewer explanations. “Why are you here, Xander? Did you want another kiss?” Maybe she was actually getting to him. She hadn’t imagined his flinch at the word kiss.
“I wanted to see you, that’s all.”
“Because we’re a match, and it’s getting harder for you to deny it. Isn’t it?”
“Something’s getting harder,” he muttered.
She tried to hide her smile. He obviously hadn’t wanted her to hear his words, but now they were out there. And speaking of, she sneaked a peek at his crotch. Yep, no place to hide that puppy. His erection punched out behind the zipper of his trousers.
Loren had told her how difficult it was for the Program soldiers to deny their instinct to be with their DNA match. So far, Xander had her questioning their connection. She felt the pull, but he’d been so distant, she thought maybe she was imagining the whole thing. Now she wondered. Perhaps Xander had been feeling the sexual pull toward her as much as she’d been toward him, but was better at denying his urge. She had no such qualms.
If he accepted her as his match, she’d belong here. It had taken her own father nine weeks to notice she’d been missing after Paulson kidnapped her. Xander wouldn’t misplace his match for more than nine minutes.
“Let’s blow off some steam,” she said, rising to her feet.
“What?” He looked startled.
She gestured to his crotch. “I want you, and you obviously want me. We don’t have to make a lifetime commitment. We can simply release some steam.” Lies, all lies. She wanted him sexually. She wanted him forever. Before he could refuse, she unbuttoned the sheer blouse she wore over a tiny pink camisole. She had his full attention now. The black fatigue pants he wore stretched tighter over the hard ridge of flesh.
Her friends at home would laugh to see her up to her usual tricks. She didn’t consider herself a slut, but she’d hooked up with her fair share of men. There was nothing wrong with liking sex, in her opinion, and she knew sex with this man, her possible match, would rock her world.
“Emma,” he said, but she didn’t know whether it was a plea to stop or keep going. So she ignored his wishes and went with her own. Which meant getting naked, right here right now in the dusty, crowded storage room. She could drag him over to her apartment down the hall, but if she interrupted this moment for even a second, she knew Xander would bolt. No, no time to get to a more private place.
Shep thought she wouldn’t want to be in the bachelor apartments after her experience at Paulson’s hands. She appreciated the distance from the bachelors, but not for the reasons thought. Living down the hall in the same building as Xander would’ve been torture. It would’ve been a battle every night not to sneak out and climb in bed with him. But now he’d come to her.

Oh shit. She was taking off her shirt, and yep, there was her bra, every bit as sexy as he’d imagined. And he’d imagined a lot. How the hell had this happened? He’d had a plan, a goal, and five seconds with Emma had blown it out of the water. He’d known Shep hadn’t particularly wanted him to match and breed, he was too much of a loose cannon.
Fine with him.
Easy as pie never to sign up to match. It wasn’t as if a guy’s perfect match would come strolling onto the compound. Except his had. And now she was getting naked, and, God help him, every reason he had for steering clear of her was flying out of his brain. Understandable, really when all blood flow was heading south.
“Emma, stop.”
“Not a chance.”

By day, Lynne Silver lives the suburban soccer mom life; volunteering with the PTA, doing laundry and working. By night she enters the sensuous world of alpha males and passionate heroines.

She calls the nation’s capital home and lives in an old fixer-upper with her husband and their two sons. When not writing romance, she reads it. Lots of it. Over and over and over again, preferably with a bag of M&Ms in hand.

thank you for the chance to win

Thanks for this awesome giveaway!!! Gift Cards for Books are my favorite thing!!!

Thanks for sharing the great excerpt and the giveaway. Sounds like a great book. evamillien at gmail dot com

Amazing giveaway, thank you so much!

Thank you for this awesome giveaway !

What a sweet chance thank you for the opportunity.

Exciting giveaway..amazing book.. hope I get a chance. ;)