Guest Post and Giveaway Visions of Fire&Ice by Teresa D'Amario 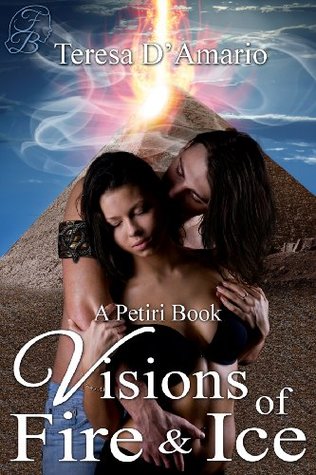 Trapped on a planet not their own, the Petiri spend their lives hiding the natural gifts that set them apart from the world. They live long and unfulfilled lives, unable to find their soul mates on this backward planet known as Earth. That is until the night Ramose comes face to face with Tamara, a woman whose gifts rival his own. Determined to find why this human is in possession of an ancient magical Petiri relic, he arranges a meeting.

But Tamara, embittered from past events, is wary despite lifelong dreams of Ramose and a sure knowledge he is her soul mate. Before long the couple find themselves ensnared in a battle that has raged for millennia in Egypt's desert. Set, Egyptian God of Chaos, is determined to take his just due: the throne of Osiris.

The only way to stop him is for Ramose to put his trust in Tamara, but, first, he must gain the same from her. The ensuing sensual relationship is filled with romance, lust and love. Their relationship is tested by an unnatural evil. Will her powers over fire, combined with his ice be enough to win the day? Or will the ancient gods and goddesses of Egypt destroy more than just their love?


GUEST POST
When Fire Meets Ice - Death, or a chance at Life and Love

Fire - SInce she was a teenager, Tamara could control fire. Or better yet, it controlled her. It burned within her, intensifying emotions, and terrifying her family. One wrong move, and the curtains would burn. One stray emotion and the candles she kept strewn about her would erupt in flame. Nothing could cool the burn. Nothing could contain her powers, except the power of her own mind.

Ice - Ramose, a man from another world, wanting deseprately to be accepted for who and what he is. A man who's heart is as cold and brittle as the ice he controls. He craves warmth, but knows if he allows one to come close to his heart, he could lose that power. And power is something he needs when his brother comes charging into his life again, determined to destroy the one woman who threatens his own emotions.

Two such powerful forces can only clash, maybe even cancelling one another, making them each powerless. Only true love can force their talents to compliment each other. And only their combined talents can destroy Egypt's most deadly god, one who's own sanity is on edge, one who lives on nothing but fear. A god so evil Ramose is prepared to destroy him to protect this woman from his dreams.

Across the centuries, across the vastness of space, and despite their histories, can two such different people survive? Only time will tell, and I can't give you any more than this. You'll have to read the book for that. Because Fire & Ice are both violent and terrible ways to fight or die. And only within the pages of Visions of Fire & Ice, a Petiri Novel, will you ever understand the true nature of the passions within each, and the explosions brought on by each!

TOUR SCHEDULE
Goodreads ** Amazon ** Freya's Bower ** Barnes&Noble
About the author:
Born in Atlanta, the daughter of an Army Soldier during the early stages of the Viet Nam war, I spent my childhood traveling from state to state, finally ending up overseas in Germany where I graduated high school six months early.

My writing career however began as a young Airman in the Air Force, writing monthly articles for the weekly base paper. The articles ranged from climatological data to full center fold articles on the destructive forces of hurricanes. As I increased in rank, my writing changed to more technological instruction, including such works as WSR-88D Doppler Radar Data Interpretation Guide for North Carolina Stations, and Station Operating Procedures.

But my early writing wasn’t limited only to the technological side. I’ve written multiple dog training and behavior articles for canine websites such as Sonora Canine Freestyle, and also the Ask Blackjack column, a fun training column in the voice of my labrador retriever, then a young pup.

thank you for the opportunity to win

Thank you for the giveaway what is your favorite book to read.

Thanks for this fabulous giveaway and the synopsis of the book sounds fantastic!!! Thanks so much!!!

Thanks for dropping by, everyone. :) Joe, that's an excellent question. I read so much it's hard to say. I prefer paranormal romance - with shifters or something very unusual. but at times, I love the magical side of things. Lately I've been re-listening to Jim Butcher's Dresden files on audio. takes forever, but so awesome that way.

I am looking forward to reading "Visions of Fire & Ice". I love stories that have a mystical base in Egyptian beliefs.

Thanks TerriLynn, I do too! Nothing more awesome than delving into a new mythology - something which was the basis for most of your Greek mythology!

This sounds like a fantastic read! Definitely my kind of story :)

Thank you for this great giveaway!

This book sounds amazing, can't wait to read it!

Thank you for the great giveaway!
(Tammy Dalley)

Book sounds rockingly good.. and can't wait.. Thanks for sharing.

I love the cover! thank you for the giveaway!