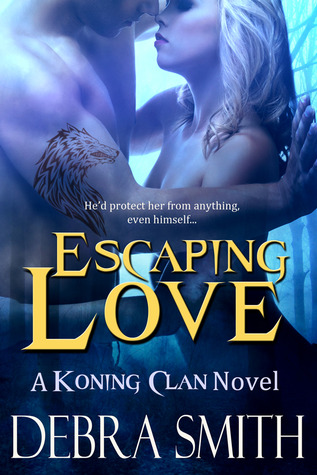 Alex, a rare white panther, is desperate to avoid her family and their expectations. Hundreds of years of tradition force her to run to the newly appointed Queen only to find her gone. Hopelessness causes her to invoke the right of Hospitality and everything that goes with it, including the mouthwatering lupine cowboy with talented hands. When he whispers her name she’s tempted to submit as long as he meets her every desire.

Clint, the beta wolf of the Koning Clan, is tired of troublesome females walking through the doors of Gryph’s Bar. The last one changed history. Now, a small, seductive feline grates on his nerves and beckons his primitive instincts. Even though she’s trouble, her taste drives him to addiction. Law dictates he must protect her, but the way she calls to his beast may lead to their undoing. As a male with no knowledge of his past how can they have a future?

GUEST POST
Clint shares a piece of his teenage years and shows Alex exactly how he would treat her.
Topic: Author's Choice

She neared orgasm from his heavy petting, but she began to feel a little self-conscious being under the same roof as his mother. Even through the desire-induced haze in her mind, she managed to speak.

“Not here. Take me somewhere.”
“Anywhere.”
He picked her up and carried her. She couldn’t see where they were headed with her face nestled against his chest. His heartbeat sounded just as erratic as hers. She traced her finger around his nipple bringing it to a peak. Then she nipped at it through his shirt and he groaned.
“Alexandria, you should stop unless you want me to lay you down and take you on the ground.”
It didn’t sound too bad to her. So she continued to torment him.
“Mean,” he growled.
Her whole body shook as he kicked in a door of some kind.
“Finally, we’re here.”
She risked a glance but couldn’t see anything. With no light filtering through the small space it was next to impossible.
He supported her weight with one hand while she assumed he searched for a light switch or some other way to illuminate the room. With a flick of a switch, a single bulb hanging from a string in the middle of the room blinked to life.
She squinted while her eyes became accustomed to their new environment. A dust-covered canvas tarp covered what she could only guess was a truck. An old one if she was right. Her gaze sought Clint, and she grinned when she saw the brightness of his smile.
“This old girl is a true thing of beauty. I’ve had her since I was in high school. I restored her myself. Found her behind the butcher’s shop, alone, neglected, and unappreciated. When I saw her just waiting for me, I worked all summer cutting meat for the butcher just to take her home where she belonged.”
A fleeting sting of jealous quickly ebbed. Jealous of a truck. Good Lord, how far she’d fallen. She tried to see what he could as he stared at it all dreamy. The vague bumpy outline of something rested under it but her imagination proved useless. Her throbbing cunt reminded her of their earlier goal, but she could see how important the still hidden truck seemed to be to him.
“May I see it?”
He blinked and beamed down at her.
“Of course.”
He strolled up to the truck almost reverently and slowly revealed every inch of the cherry red and chrome masterpiece. Even with her untrained eye she could see the love and devotion he put into the truck. Hell, the feeling was almost palatable.
“She’s beautiful.”
“Little Cat, I’d like you to meet Rose. She’s a 1954 Ford F100.”
Tentatively, she touched the fender, careful not to leave a mark. A calm reverence filled her. She continued her exploration, stepping to the driver’s side window and gazing into her interior. Black leather seats and a simple interior had her spellbound.
“Would you like to go for a ride?”
“Really?”
He dipped his head, watching her intently.
“Yes, I’d like that very much.”

Jenny never expected her thirst for freedom to lead to her capture. Family secrets prevent her from running from the only man tempting enough to make her submit to her body's desires.


Gryph is dark, sexy, and determined to win Jenny in the Slag, a contest revered by his kind. As the leader of his Clan he's used to getting his way, until her. Can he give Jenny her freedom while winning her heart?

About the author:
I love romance of all kinds. I've been writing all my life and decided to follow my passion. Thanks to a loving husband and the chaos caused by my three wonderful children I find inspiration in all things. I grew up In Colorado but currently live in North Dakota.

I was never one of the people in high school that knew what they wanted to do in life. I was lost. I had things I enjoyed but never felt passionate about. The love of animals, travel, art, and creative writing, seemed impossible to combine. So I drifted trying to find the thing that ignited a fire in my heart. Then not long ago I decided to finally tell everyone about the lives of the people in my head. Sounds completely crazy I know, but they felt real to me and much like the heroines of my stories I decided to fight for them. Thanks for taking a chance.

Website ** Goodreads
Author's Giveaway
a Rafflecopter giveaway
Posted by CCAM at 10:30 AM

This looks great, thanks so much for the giveaway!

Thank you very much for the giveaway!

Thanks! I really enjoyed writing Clint and Alex's story. Thanks for having me.