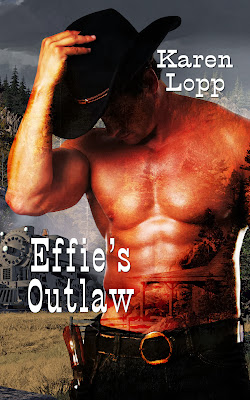 Boston heiress, Effie Sheridan, takes matters into her own hands when her fortune is being stolen. The last thing she expects is to be kidnapped by a gang of train robbers. Forced to pretend to be an outlaw's lover to stay alive, she questions her sanity when she is drawn to the gruff, yet charming bandit who risks everything to save her.

U.S. Deputy, Alex Marshall is mad enough to spit nails when the beautiful, city-bred girl lands in his arms. Unable to abandon her to the cruelties of the gang, he searches for a way out of the responsibility. But her courage and sweet kisses begin to chip away at the bitterness inside his heart and he must choose between revenge on the gang that slaughtered everyone he loved or redemption for saving a women he can never have.

GUEST POST
Why I chose to write about a U.S. Deputy Marshal


I’ve always admired the stories about Marshals in the Old West and since I have an ancestor that actually was one, I just couldn’t resist bringing him to life. And his name was Alexander. Plus, I really wanted a play on names, so I chose Alex Marshall as the lead character in Effie’s Outlaw.

Choosing a character that, in the end, will always do what is right, no matter what he feels about himself, appeals to me. Plus, overcoming great odds adds a depth to a person that I find admirable. All through history we find examples of those that step forward and do what others will not. What we rarely read about is the average men and women that quietly went about their lives and just did what had to be done, without recognition or fame. These are the people that I like to learn about and draw ideas from. Their stories are worth being told, even if it is done in fiction.

Writing about Alex, who thought he could throw his life away on revenge, but discovered deep down that he couldn’t, was fun. Having an annoying angel in need of rescuing, dropped into his lap forced him to face his demons and overcome the grief that had almost broken him.

The quiet frightened her. She was used to buildings, noise and humanity. Used to a kind face if she got lost. Used to law-abiding citizenry, not a landscape full of barbarians.
She took one step and then another. A flash of red in the distance made her freeze. Most of the men sported red bandanas. Effie turned and rushed in a different direction, her blood froze at the close call, remembering the outlaw’s threat of selling her to the highest bidder and the horror the other women endured.
A headache hammered in her skull and dulled her ability to stay focused. Her feet hurt and every step revealed a new pain from her fall from the train. Mouth dry, she longed to find the stream Lefty said existed. She was beginning to think he lied. A quick glance back reveled— nothing. The tight knot in her stomach subsided.
A glare caught her eye, and she quickened her footsteps. Something shimmered in the sunlight. She hurried towards the source. It had to be water, nothing else bright came to mind.
In her haste, Effie tripped over a rock and landed on all fours. She hissed out a cry of pain. Her heart fluttered like a fly trapped in a jar. Had anyone heard her? She glanced up, the silver canteen that Lefty had hung up, swayed from the branch above her. Fingers curled into a fist she punched the air.
Her valiant effort to escape had only led her right back to Lefty. To the man who had ripped her from the comforts of civilization, forced her to wear indecent clothes, and expected free reign of her body when he woke.
Damn. Yes it was rude to think such vulgarities, but not a soul here would be offended by her lapse into crudeness. Now, she had to start all over. Go back into that labyrinth and find a way out. And avoid getting caught.
Effie hauled her aching body upright, brushed the hair from her eyes, and started walking. Dappled sunlight fell across the ground. Something crunched in the stillness and she choked back a cry.
“I tell you I saw someone wandering around.” An angry voice sounded close, too close. Ice crystallized on her skin.
“You’re hallucinating. Ain’t no girl haunting this forest.” The second, deeper voice was filled with disgust.
“Who else would wear bright orange and go in circles?”
“Orange? You fool, that’d be Consuela. Ben will kill you if you bother her.”
“She has on blue now. A real fancy new dress. Probably stole it from one of the captives.”
“Maybe it’s Lefty girl, she’s the only one left. He’ll kill you too. I’ve seen him draw. You don’t want to mess with him.”
“Are you going to tell?”
“Course not.”
“Then let’s go find her. Have some fun and kill her. Lefty won’t know who did it.”


Effie’s stomach crawled up to her throat and strangled her. A layer of sweat slicked her upper lip. How could she avoid these predators? One of them had seen her and now hunted for her. She peered around the tree, only to see them angling directly towards her. 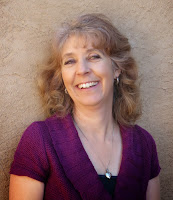 Steeped in a rich family history, Karen Lopp has always been drawn to the courageous lives of the women who lived through the hardships of the past and triumphed.

A transplant from Oklahoma where she grew up on a farm just one mile away from where her great-grandparents settled in the land run, Karen now lives in the enchanted land of New Mexico and has a running competition with her dad on who can grow the tallest hollyhocks. Books and tales of ancestors were staples in her life and she fell in love with history. Enthralled with the short stories her grandmother wrote and passed down, she took the plunge (with encouragement from hubby and kids) into the world of writing. Her inspiration comes from research into her family tree and their interesting lives.

Author's Giveaway
a Rafflecopter giveaway
Posted by CCAM at 12:20 PM

Thank you for having my here today.

Thanks for being a part of this post!!! And I adore that cover!!!!

I love the cover of the book. Westerns are almost always good books. Thanks for the giveaway.

Thank you so much, Gayle. Good luck in the drawing.

Thank you, Morena. I hope you enjoy it.

Thank for the giveaway!

This looks like a good book and I would love to have the throw.
sstrode at scrtc dot com

Thanks so much for the great giveaway.. looking forward.