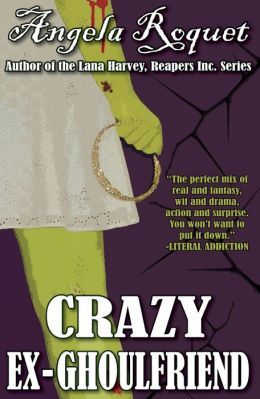 Bullies are no fun. Zombie bullies are even worse. Janie Parker finds this out the hard way in Crazy Ex-Ghoulfriend…

I waited for my parents to leave before I sulked around the kitchen to fix myself a bowl of cereal. Then I sprawled out across the living room sofa and watched some random trash talk show. There were two women fighting over some fat, balding guy. One of them tore off the other’s wig. Then the show host revealed that they were distant cousins. I still didn’t feel better.

Chloe’s parents weren’t churchgoers, so I finally worked up the nerve to call her.

“Ohhhh. This sounds promising. Do tell.”

“Wayne kissed me. It was awful.”

I groaned. “Some… thing made a noise. I freaked out and bit him.”

“First kisses are supposed to be messy. They’re a rite of passage.”

“Yeah, but they’re not supposed to be bloody.” I rolled over on the couch and buried my face in the cushions.

“Bloody? Wow. You really did bite him.” She was so not helping.

The garage door opened and I heard a trash can tip over. My parents must have decided against breakfast brunch with the Russells.

Chloe laughed again. “Don’t worry yourself sick. This will work itself out. You’ll see.”

I hung up and clicked off the television before dragging myself off the couch. I had already decided to fake the plague in hopes of skipping out on school Monday, but when I emerged in the kitchen, there was no one waiting to witness my pathetic theatrics.

The floor upstairs creaked. I must have looked more miserable than I’d been shooting for this morning. They were already checking in on me. I headed up to my room.

“I was just napping on the couch,” I said. Soft snickering trickled down the hallway, and my bedroom door was closed. That was weird. I pushed it open slowly.

Matilda Hunt’s rotting corpse lay on my bed. Her limbs sprawled out like a rag doll. The stitches along the left side of her face were red and uneven, and I could see the pins that held her broken leg together, pressing through muddy white tights. Her dirty blond curls fanned out over my pillows, and my stuffed bunnies, Herbert and Gertrude were nestled in under her armpits. They were contaminated now. I would have to give them a proper burning and burial in the backyard, and I wasn’t happy about it.

The bigger question, the one about how the rotting corpse of my arch nemesis ended up in my bed, was too large and abstract for me to grasp right away. Surely Denise and Danielle wouldn’t have gone through this much trouble to torture me, I thought. Soft snickering brushed through the air again, and then it moved. Matilda freaking Hunt’s corpse sat up in my bed and grinned at me with its filmy fish eyes. I wet myself.

“Seriously, Janie? What are you, like, in preschool?” Matilda glanced down at my crotch and curled her nose up, tossing one of the tainted bunnies across the room at me. I let it bounce off my stomach and tumble to the floor, too frozen and grossed out to attempt a catch.

“You’re dead.” It was the most painfully obvious and stupid thing to say, so naturally, I had to say it.

Matilda rolled her eyes. “You noticed that, did you?” She hopped up off my bed, which I was pretty sure needed to be burned now too, and pressed her face into the mirror above my vanity. She tried out one of her movie star smiles, the kind I’d often witnessed her practicing in the bathroom at school, but her formerly bright whites were dingy and stained with old blood. A little gasp wheezed through her, and she gave the mirror a hurt scowl.

“You’re dead,” I said again, because I couldn’t think of anything more clever to say.

“I still look better than you,” she snarled at me.

I laughed then, surprising us both. “No, Matilda. For once, I can honestly say that you most certainly do not look better than me. I could roll in dog crap-- I could go dumpster diving, and I would still look and smell better than you do right now.”

Matilda struck like a cobra. It was a solid right hook, and it split my lip wide open. I didn’t even see it coming. I stumbled back a step. Matilda followed, tripping over the forgotten bunny, and fell into me, tangling her veiny, mud-caked hands in my tee shirt. I shrieked, trying to twist out of her grasp. I ended up pulling us both to the floor, and I felt one of her ribs crack as I landed on top of her. She didn’t even flinch.

My stomach churned as she giggled her stale breath in my face. I sprang away from her and scooted backwards on my hands and feet, doing my best not to regurgitate my breakfast. I did not want to know what it would taste like coming back up. Besides, I’d already peed my pants, and that was enough humiliation for one day.

“This is absurd,” I said, scrambling to my feet. I snatched the cell phone off my bedside table. “I’m calling the police. You’re… you’re trespassing. And you’re dead!”

Matilda propped herself up on her elbows. “You do that. I’ll just lie here, still as can be. After you’re arrested and charged for digging up a corpse, you’ll be committed to an asylum. Do you suppose Wayne would come visit you? I mean, surely he’s anxious for a repeat of that pathetic excuse for a kiss you laid on him last night.”

“I knew it! I knew there was something out there.” I pointed the phone at her and thought long and hard about chucking the thing across the room, now that I obviously couldn’t use it to call for backup.

Matilda tilted her head back and howled out a deep, throaty laugh that grated down my spine. Her dry lips cracked and oozed as they stretched around her ghoulish teeth that were even more frighteningly large now that her gums were receding. She was every bit as vicious dead as she had been alive.

My throat tightened and I had to choke down my next breath. The room swelled and shrank, and for a minute I thought the power was surging, but it was just my vision, dimming in time with the panicked pulse drumming through my skull. Maybe if I decapitated her, she wouldn’t come back to haunt me again. Of course, then there would be the matter of sneaking an extra dead corpse out of the house. The garbage disposal in the kitchen came to mind. I would need to wait for my nerves to cool, I realized as the phone slipped from my trembling hand. I needed to buy some time. I needed a distraction.

“What do you want, Matilda?”

“Hmmmm?” She hadn’t heard me over her laughter.

“Why are you here? Why aren’t you at Denise or Danielle’s house, terrorizing them?”

Matilda frowned, drawing her pale skin down so taut over her cheekbones that two blood red crescents appeared beneath her eyes. She sighed and sat upright, folding her mangled legs under her skirt. “The Double Ds looked good flanking me. They knew how to kiss ass and how to pick out a pair of shoes, but they don’t have half a brain between the two of them.”

“So… you’re here to eat my brains?” I was hardly about to believe that she was looking for a new bestie now that she was dead.

“So,” Matilda groaned, “I need someone with a little brainpower to help me finish the unfinished business that landed me in this predicament.” She waved a hand at herself in disgust.

Matilda scowled at me. “On second thought, maybe I will just eat your brains.”

I rolled my eyes. “Seriously? I help you resolve your unfinished business, and you’ll just poof! Be gone for good this time?”

“That’s the idea.” She pulled herself up off the floor with a grin.

“And what exactly is this unfinished business?”

Matilda’s fish eyes glowed. “Why, to go to prom with my true love, of course.”

I swallowed and took a slow, deep breath. The garbage disposal was looking better and better. “Brains or not, I really don’t see how I’m supposed to convince Wayne to go to prom with a corpse.”

Matilda twitched when I said the word corpse, but she kept right on grinning. “Oh, you’re going to convince him. If you don’t, I’ll make an anonymous call to Officer Russell. They’ll find me in your room, dead as a doornail, and life as you know it will be over.”

“You wouldn’t,” I whispered.

“Try me.” Matilda’s grin widened until I thought her face might split in half. Of all the nasty tricks she had played on me, this one was the dirtiest by far. It had to be killing her that she couldn’t even gloat to her minions about it.

Then I thought of the awkward kiss Wayne and I had shared the night before. I was so close to having everything I wanted, but even in death, Matilda had found a way to ruin it all. She had to die. Again. And this time, for good. I was just going to have to make sure that she didn’t see it coming. 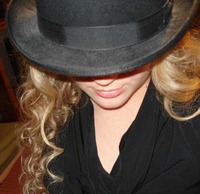 Urban Fantasy Author Angela Roquet is a great big weirdo.
She collects Danger Girl comic books, owls, skulls, and random craft supplies. She no longer collects paperback books, because she can’t fit any more in her office, however she does collect ebooks. She has an unhealthy obsession with television shows created by Joss Whedon and fantasizes about him directing television or film versions of her novels. Angela’s favorite book/movie is The Wizard of Oz. She likes a little coffee in her cream, and her favorite food is sushi, even though it takes her FOREVER to make. Angela is a peace loving, tree hugging hippy who tries to buy organic and local as often as possible. She’s a fan of renewable energy sources, marriage equality, and religious tolerance. As long as whatever you’re doing isn’t hurting anyone, she’s a fan of you, too. Angela lives in Sedalia, Missouri with her husband and son. When she’s not swearing at the keyboard, she enjoys painting, goofing off with her family and friends, and reading books that raise eyebrows. You can find Angela online at:

It sounds like this book is going to be hilarious.

thx u for the great giveaway :)

Love the Reapers Inc. series and would love to read Crazy Ex-Ghoulfriend.

Sounds like a really fun read and perfect for this time of year.

This was such a fun book to write! I hope you all enjoy Crazy Ex-Ghoulfriend, and good luck in the giveaway! :)

Thank you for participating in this great blog tour and yes the book is now o my TBR pile!