"This was an absolute joy to read.Such a well written plot and story line that had me from the start.
Wonderful well fleshed out characters that were a joy to get to know.
Great world building that added the extra depth to the novel.
Such a brilliant little ya relationship that we follow through the heartache, fears, trials of life." Billie, Goodreads 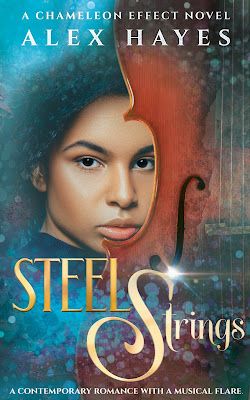 Compelled to silence, Brianna is like a cello without strings and must fight to reclaim her voice through the instruments she creates.

Brianna Jones is a nerdy, biracial teen who dreams of bringing music to the world via orchestral instruments fashioned out of recycled materials. But she must keep her project secret from her half sister, whose mission in life is to destroy everything Brianna holds dear.

Marek Lakewood is one of the few guys who sees Brianna for whom she really is and has admired her from afar for years, but he’s never been a risk-taker, not since his father was killed on a black diamond ski slope.

When a physics project lands Marek in Brianna’s sphere, he finds himself taking bigger and bigger risks, and discovers Brianna’s life and aspirations are far more complicated than he ever imagined

Steel Strings is a contemporary romance and companion novel to the Chameleon Effect Series.

When it comes to creating characters, I start with broad strokes. As plot details come to me, I tool my characters to fit the story and its theme. I wanted Brianna to have a big dream, but to realize that dream, she needed a number of handicaps to overcome. Otherwise, there wouldn’t be any story. I also wanted her to unconsciously be guided toward her soul mate, Marek. For the first time, she chooses someone she likes, instead of being chosen by someone else. That meant Marek had to be her intellectual equal, someone she admired and respected, but for whom she felt she wasn’t good enough. A big part of the story is her discovery of her own worth. Through that journey, Brianna discovers who her true friends are and who her enemies are.

Part of my drive to write stories is to get to know my characters and explore what makes them tick. My protagonists become my friends in a way, people I care about as if they were real people.

About the author:
Alex Hayes wrote her first fiction story when she was twelve. Inspired by her mother’s storytelling, she began work on her first novel, Ice Cracks, at eighteen.

She received a Bachelor of Arts degree in English, Creative Writing from San Francisco State University. In her twenties, she moved from Marin County, California to Boston, Massachusetts, where she built a career as an IT professional in database engineering. In 2004, she self-published Ice Cracks, which became a semi-finalist in the 2005 IPPY Awards.

Alex splits her time between Grand Junction, Colorado and Guanajuato, Mexico. When she isn’t writing, she’s helping her partner, Lee, renovate a 450 year old hacienda. She is mother to one beautiful daughter and many wonderful cats.

Really great cover, thanks for sharing!

The story sounds really good. It's a very touchy topic and I'm curious about more of the rivalry between the sisters more than the romance.

The cover pic is so intriguing.. what an interesting face.....

The cover art is very attractive. The storyline is unique and seemingly full of drama. Thanks for sharing. Best wishes to the author on the book release.