"ONE AWESOME ADVENTURE!!!Lights out! Charlene raises the stakes and lowers the boom with this action packed, hard hitting, heart pounding, pulse racing, block busting bombshell, nailing it down, blowing this bad boy into the eye of the storm, throwing this baby into a tailspin with astonishing results." Kaye, Goodreads 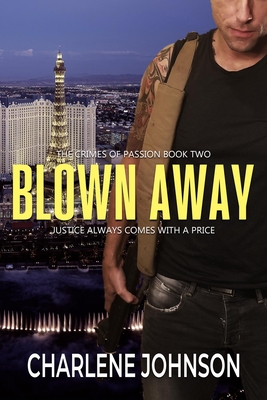 Zack Daniels grew up in a rundown apartment complex off the Las Vegas Strip. At an early age, he learned to protect and support his mother and sister with determination and grit. After his sister is raped by the son of a local Russian mobster and commits suicide, he joins the Las Vegas Metropolitan Police to seek justice for her and to protect the public.

When a high-profile executive is murdered in his best friend’s hotel, Zack is assigned to track down the killer. The sole witness to the murder is a beautiful high-priced escort. He must let go of his vendetta against his sister’s rapist to work the case.

Sonnet Banks goes to the wrong hotel room and witnesses a murder. She is stunned. She knows the killer. He’s someone from her past. Someone she hoped to never see again.

During her police interview, Sonnet tells Zack she doesn’t recognize the killer, but Zack is convinced she’s lying. Zack needs the lovely, evasive woman to tell him what she knows and is willing to use seduction to get it. Yet, was it still seduction when all he could do was think about her?

Zack Daniels is so hot he makes Sonnet’s knees weak. He checks every box for her. Every box. But even if he wasn’t her protector, she can’t risk getting close to him or anyone. And she can’t tell him the truth.

After a bold attempt on Sonnet’s life, Zack enlists the help of two close friends and someone completely unexpected to protect her. The countdown to an all-out war looms before them. Would they all survive? Time was running out.

Books have always been her passion. She started reading at an early age and progressed to full-length books by age nine. The first supernatural book series she read was Dark Shadows, and it sparked her interest in all things paranormal, with a spicy touch of romance mixed in for good measure. She also started writing poetry in grade school and continues to do so today.

Being an avid reader, the consummate daydreamer and an incurable romantic with a Cinderella complex, she started creating her own characters and storylines because she realized she had her own stories to tell.

She is married and has a son, a daughter, and four beautiful grandchildren.
Besides reading and writing, she also enjoys photography, travel, music, and great movies.

a Rafflecopter giveaway
Posted by CCAM at 5:45 PM

Sounds like one awesome adventure! All in all, this book looks like a really good thriller. I think I would enjoy it all

I like the cover. It is very well done.

The cover looks nice. Sounds like a great read

I don't love or hate the cover.

This book sounds like a book that moves at a quick pace which I like. Rosanne rosan4 comcast (dot) net

I think the cover draws you in. I love it.

The cover makes me think about all the different scenarios that this book may be about!

Excuse me but, wasn't there a movie with Jeff Bridges by the same name?

I love the cover. This is the kind of book that I know will keep you remembering the characters long after the last page is read.