There was a secret... Smoky Mist (The Legend of the Ghost Train #1) by C.J. Baty

"This was a page-turner for me and I highly recommend “Smoky Mist” for readers who enjoy romance and historical/paranormal or anyone who likes a good story. I’m excited to hear that there are several more stories to come, “Cannon Fire”, is up next." Maryann K., Goodreads 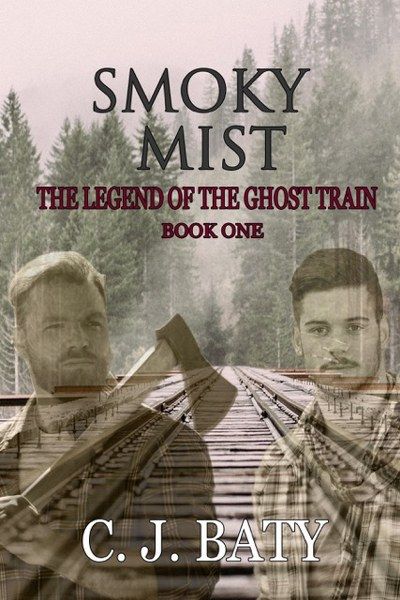 Jesse Lawson was never afraid of the strange and unusual dreams he had. But lately, they were becoming darker leaving him with a need to discover why he was having them. The Great Smoky Mountains once were the site of many logging camps. It only made sense to travel to the place where his great grandfather had lived and died, since it seemed his dreams were about Jackson Douglas himself.

Carter Thompson never knew his great uncle George Thompson, but he inherited his land, home, and money. George had come here to find work in the lumber camps. Secluding himself from the outside world, no one really knew what happened to make him become a recluse. Carter only knew he loved his home and the bar he owned. Meeting Jesse Lawson was about to turn his world upside down.

There was a secret about a train wreck that killed Jackson Douglas. Now it seemed that something was trying to destroy Carter and Jesse’s growing attraction to each other. Whoever it is will stop at nothing to keep them apart, even if they have to repeat the past to do it.

“Amazing.” Jesse said out loud, causing a rabbit to skitter out of a nearby bush and hop away. He chuckled as the white fluffy tail ran into a hedge by his feet.

“Yes, you are.”
Jesse whipped around at the sound of a voice in the wind.
“Who’s there?” He asked, searching for another person, yet he saw no one.
He knew he’d heard a voice, and yet, it was clear he was totally alone where he stood. A warm breeze ruffled the leaves in the trees overhead. It surrounded Jesse, wrapping him in a comforting embrace. It felt like a hug.
“I missed you,” the same voice whispered in Jesse’s ear.
It didn’t frighten him, that was the surprising part of the situation. He wasn’t afraid. Curious… yes. But definitely not afraid. The name was on his lips and in the air before he could stop it.
“George?”
Icy tendrils snaked around his body causing instant pain. The feeling was so cold, it burned his skin. The ground reached up for him, he relaxed against it. He felt the softness of the new grass beneath his head, and then nothing.

His head hurt when he woke, but not so much that he knew something was very wrong. Jesse knew he was lying on a small bed in a setoff house. They all looked the same. He could smell wood burning, strong coffee, and bacon. A man with his back to him was bending over a black pot belly stove stirring something in a pan.
Jesse opened and closed his mouth trying to form words, but nothing came out. In visions before, Jesse saw through Jackson’s eyes, but he was always in his own body. This wasn’t his body. Something was very wrong.
He could feel the fear rushing through Jackson. He shook with emotion. The taste of bile tinged his words when Jackson finally spoke.
“You’re a monster,” Jackson said throwing the blanket off his naked body.
Jesse didn’t want to be here. This experience was nothing like his prior dreams. It was too real, too painful. When Jackson reached for his pants that lay on the floor by the bed, Jesse noticed the raw rope burns around Jackson’s wrists. Dried blood flakes fell away as Jackson dressed.
Jesse felt everything Jackson felt. All the pain and confusion. This was nothing like what he had experienced with George. Where was George?
Why was this happening to Jesse?  Why did he feel the emotions and pain?
The door crashed open with a bang. George looked like a wild beast as he rushed inside the small building.
“Get out!” He screamed at Jesse. “Get out now.”
Jesse grabbed the rest of his clothes and ran through the open door behind George. He stopped a few yards from the setoff house and listened as he dressed.
The two men inside yelled at one another. They were fighting. Jesse could hear the sound of fists hitting flesh. Suddenly, flames shot up in the window. The setoff house was on fire.
“George!” Jackson screamed.
“Remember.” A voice Jesse didn’t recognize screeched at him.

About the author:
CJ Baty dreamed of writing her own stories from a very young age. Time and life got in the way, but with the encouragement of her two grownup children, she began to follow that dream. She loves a mystery and when you mix in romance and hot men, you can bet there’s going to be a happily ever after. She brings her love of nature and the mountains of the Southern states into her stories too. Too many years spent in an office crunching numbers, left her with the desire to explore new places and experiences. Whenever, possible you can find her in Tennessee enjoying the fresh air and beautiful scenery. Her muse lives there so she visits often. She believes deeply that love is love and love is what binds us all.

a Rafflecopter giveaway
Posted by CCAM at 9:33 PM

This book looks good! Thanks for sharing the excerpt... :)

Thank you. It was a pleasure sharing with with you. CJ

I really am going to enjoy this historical book.. Great cover..

The graphics on the cover are great. The fonts add a clunkiness to it, though, that detracts from the mystique and....elegance... of the graphics.

Cover looks awesome and this sounds like a good read for me!

The cover is good, I like the logging theme

I love the cover, sounds like a great book!

Cover looks great and this sounds like a good read.