from a shallow grave... Blood Bound: A Lowrance Vampires Novel by R.J. Blain

Despite being corrupted into a feared preternatural, Penelope Francis clings to her humanity and refuses to prey on innocents, instead slaking her thirst on other miscreant vampires. 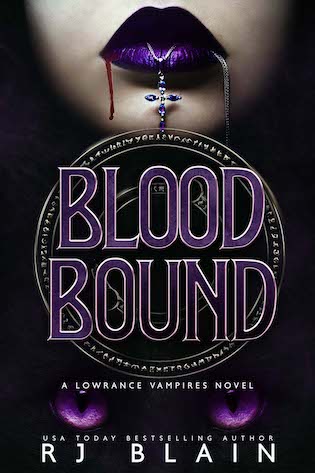 After waking in a shallow grave and clawing her way to freedom, Penelope Francis hunts for the rogue who stole her life and transformed her into a vampire. Despite being corrupted into a feared preternatural, she clings to her humanity and refuses to prey on innocents, instead slaking her thirst on other miscreant vampires.

In exchange for a chance at revenge, she joins forces with the charismatic master of the Lowrance brood, a choice that may spell the salvation—or destruction—of humanity as she knows it.

Another night, another vampire, another double-dead end. If I didn’t get lucky soon, I’d run out of miscreants to drain, stake, decapitate, and decorate with holy wafers. In reality, I only needed to stake the toothy bastards, but I figured if I was going to kill every damned unclaimed vampire in New York City, I’d do so with style and get a free meal out of the deal at the same time.

In life, I’d done well for myself; I’d become my father’s perfect daughter, dedicating every waking moment to my budding career as a corporate lawyer on a mission to protect his business interests. In death, or undeath as it was, I’d become a big nothing. I couldn’t even claim I’d become a big fat nothing, as I kept losing weight instead of gaining it, no matter how many of my kind I tagged, bagged, drained, and tossed out with the trash.

Penelope Francis was dead and gone to everyone who mattered, even me.

My stomach reminded me of my neglect with a displeased gurgle. Grunting my dismay over having completely drained another vampire without slaking my hunger, I checked his pockets for cash and found nothing but lint, not even a wallet, ID, or pocket change.

If he’d had food hidden in his pockets, I might’ve been tempted to try my luck. If I ever ditched the relentless hunger, I’d never take food for granted again. I resented my maker’s decision to abandon me in a shallow grave, forcing me to fend for myself. The bastard could’ve left a damned note with a few clues, especially in the feeding department. A manual about life as a vampire would’ve been appreciated. I still wasn’t sure what I could eat. Shortly after I’d risen, I’d tried a slice of pizza once and only once. It hadn’t ended well. I dodged food, afraid I’d throw it up along with my literal guts.

Just to be sure, I rechecked my victim’s body to confirm his lack of cash, ID, or food.

Nothing. Color me not surprised.

I hated killing those as destitute as I, but I refused to harbor guilt over ridding the world of a vampire who hunted homeless teens struggling to survive New York’s harshest streets. While I hoped the kids would survive, I had my doubts.

Miscreants—unclaimed, rogues, or whatever society called the illegal vampires lurking on the streets—couldn’t afford to let their prey live to tell the tale. When found, humans and preternatural alike hunted us to ensure we never bothered anyone again.

Living on borrowed time sucked, as did homelessness. When I found the vampire who’d turned me, I’d take my time draining him. I’d enjoy every swallow. I’d turn his last moments into a masterpiece of brutality.

All I knew was that my maker had been a man, and he’d left some dark mark on me, something that tainted my soul. I could still feel his corrupting influence deep within, a pressure on my heart.

Until I breathed my last for the second time, I’d spend every night seeking him out so I could end his miserable existence. I still wasn’t sure why I’d been targeted or how I’d survived the transition from human to vampire without help. My desire for revenge confirmed one unassailable truth: I was no better than the filth I hunted.

About the author:
RJ Blain suffers from a Moleskine journal obsession, a pen fixation, and a terrible tendency to pun without warning.

In her spare time, she daydreams about being a spy. Her contingency plan involves tying her best of enemies to spinning wheels and quoting James Bond villains until satisfied.

Wow, that purple lip shade is so dramatic!

I love the cover. It is very well done!

Cover art is great and loved the excerpt. Best wishes to the author on the new release.

The purple lips are awesome! The cover certainly got my attention.

The book sounds like a great read, I love the cover, It looks amazing!

I'm not into the vampire thing much but my bestie loves them! I've shared the new book with her!

love the cover colors too sounds great to read.