When predator and prey become one, no one is safe. - Capital Thirst (Erin Kingsly #1) by R.W. Buxton

Tonight was her night to kill, and she wanted it to be perfect. Just who would it be? 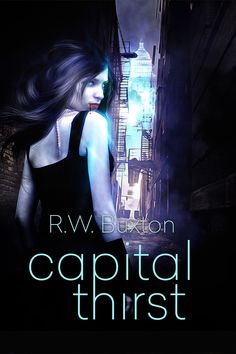 DC bustles, the light from the city fills the night. But in the dark alleys and backstreets, only slivers of light from a full moon dance. In such an alley, a shadowy figure is hunched over a body. She lifts her head to reveal soulless eyes and fangs dripping with blood as she licks her lips with exultation.

Standing up, she wipes her chin, and tosses her long black hair, then saunters away.
At FBI headquarters, Gerry examines the case files of 18 wealthy men, dead, with few clues, no DNA, and no leads...

When predator and prey become one, no one is safe.

Vampires are the stuff of myth and legend. They’ve appeared in everything from the classic Dracula to Anne Rice’s Interview with the Vampire and make up a huge part of the paranormal genre, but why? For myself, the vampire is the pinnacle of the paranormal creatures. Sure there are demons, but they aren’t human. Shifters are cool, but not immortal. Vampires are the most dangerous, the most cunning, the most glamorous, and immortal. Assuming they don’t meet a violent end. But even if that happens they survive for a very long time.

Immortality is fascinating. Imagine have lived through the American Revolution. Been around during the religious reformation. Having been a contemporary of Leonardo da Vinci. To have seen the world change around you would be amazing. Every new millennia bring something new. As a vampire, there you are in the middle of it. It’s happening all around you, maybe you are even a part of that change.

I suppose there are downsides to immortality and Anne Rice explores them. Boredom being one. How long can you continue without becoming bored with the human plight? Watching humanity making the same mistakes over and over. In some novels vampires turn to perverse activities to amuse themselves, while others go into deep long sleeps to avoid it.

Vampires have transformed in modern literature. Going back to Bram Stoker’s Dracula in early literature they were evil creatures of the night. They lived by killing humans and drinking their blood. They could only exist in the night and the sun would kill them. In modern literature, they can be sparkly creatures that don’t mind the sun and people don’t notice the sparkles.

In Capital Thirst I kept many of the classic vampire features. Erin is can’t be in the sun. She has to be invited in before she can enter a home. The power of suggestion, the ability to read minds. The need for blood and I don’t think animal blood counts. Erin is pale and becomes more flesh colored after she feeds. No sparkles here. Think about it, she’s dead.

As for changes. Even though Erin kills, she’s selective in who. She isn’t on a rampage to kill everyone. Men who think they can have any woman they want because they have money or power are her targets. She’s not pure evil either. She has hopes, dreams and desires. She’s suffered hurt and pain and in her way tries to overcome that, to become stronger. Garvila is the exact opposite and much more like earlier vampires in literature.

When I started writing Capital Thirst one thing I wanted to explore was what is good and evil. Are you evil because of the things you do? Or can you still be good and driven to do evil things? If you are evil can you truly experience love or is it nothing more than passion? Sure Capital Thirst is a paranormal romance and when people read it, the goal is to have a good time and be absorbed in the story, but there are deeper questions to ask ourselves. I’ll let it up to each reader to decide the answers to these questions, but I know where I stand.

About the author:
I love a good paranormal read, something about the un-dead haunts the fringes of my mind. Mix in romance, love, loss, and you have a great story.

I voraciously read everything, fiction, and non-fiction but always find myself turning back to the darker stories. I’ve always wanted to write and the dream became a reality with Capital Thirst, and the remainder of the Erin Kingsly novels.

I spend most of my days designing and building websites, but my free time is devoted to my wife, family, and cats. Yes three grown children and three cats. Things can be hectic.

For fun you might find me driving winding roads with the top down or out photographing nature.

Author's Giveaway
the more you comment, the better your chances of winning
a Rafflecopter giveaway
Posted by CCAM at 4:00 PM

Thanks so much for sharing your book and for the giveaway also. Greatly appreciated!

Love the cover!! So glad I stopped by the blog today! Looking forward to reading your book!

Hi, and thank you for hosting my book Capital Thirst today.

I'm having a few technical difficulties this morning so if I don't respond to your post it's not that I don't care or haven't seen it, rather I just can't do it for some reason.

Thanks for sharing, this looks great

"Thank you to everyone that has stopped by. I feel terrible I couldn't respond to each post individually, but due to ongoing technical issues I was unable. I did read all the comments and appreciate all the kind words."

This sounds like a book I will really enjoy!