"Fun, funny, fast paced and steamy. Ethan and Kizzy, get some help from Quinn and Xenia, Uncle Saul, and Adan. Love this series. I know I will get a fun laugh out loud story."Annie, Goodreads 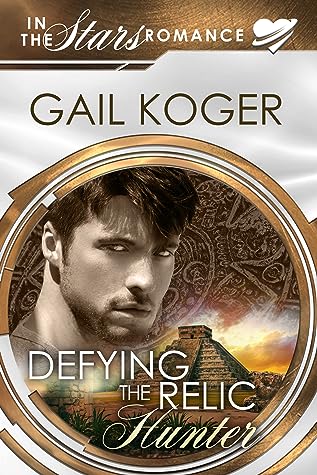 Kizzy sees dead people, but she’s a thief and talking to dead folks is about as useful as a three-legged horse. The Dragos clan booted her out when her year’s take was a lousy five hundred and sixty credits. The only way back in is to pull off a million-credit heist. Alone.

When Kizzy’s jobs as a roadkill collector and medical test subject goes south, she decides taking Montezuma’s gold away from an Indiana Jones wannabe is the ultimate heist.

The snag? The Indiana Jones wannabe is Ethan Jones, a dangerous Coletti Warlord. Now that she’s caught his attention, he’s determined to capture her as his prize.

Can the ghost whisperer defeat the big, bad Warlord? Defying the Relic Hunter!!

My clan is filled with accomplished conmen and thieves. The more loot you bring in the higher your status. To date, I’ve brought in five hundred and sixty credits. Uncle Aldo had faith in me. My clan not so much. They booted me out. The only way back in was to pull off a million-credit heist. Alone.

I was twenty-two with no real job skills, no money and the realization I hated being a thief. To keep me from becoming homeless Uncle Aldo rented me a cheap apartment on the sly. After a month of searching, I managed to find employment as a roadkill collector. My job was scooping up the mangled furry bodies. I was ecstatic. It paid twenty credits an hour but working in 110-degree temperatures was tough. I lasted a month before I ended up in the emergency room from heat exhaustion.

My second job was cleaning gross, fly infested porta-potties, which earned me another trip to the hospital for dehydration. The only upside of that nasty job was I happened to be in the right place, at the right time to rescue a three-year old girl from her kidnapper. Uncle Aldo had a fit when my picture was plastered all over the news vids. Being a heroine got me nada.

Utter desperation drove me to become a research subject in an experimental drug trial. When I started babbling about seeing dead people, they abruptly showed me the door.

About the author:
I was a 9-1-1 dispatcher for the Glendale Police Department and to keep from going totally bonkers – I mean people have no idea what a real emergency is. Take this for example: I answered, “9-1-1 emergency, what’s your emergency?” And this hysterical woman yelled, “My bird is in a tree.” Sometimes I really couldn’t help myself, so I said, “Birds have a tendency to do that, ma’am.” The woman screeched, “No! You don’t understand. My pet parakeet is in the tree. I’ve just got to get him down.” Like I said, not a clue. “I’m sorry ma’am but we don’t get birds out of trees.” The woman then cried, “But… What about my husband? He’s up there, too.” See what I had to deal with? To keep from hitting myself repeatedly in the head with my phone I took up writing.

Thanks for sharing your book with us. I think we all enjoy hearing about new books we previously didn't know about. Also, thank you for the giveaway.

How do you come up with the characters names in your book?

Some times I use Google, some times they just come to me.

Great cover! Thanks for the chance!

This is one of my all time favorite series and I plan on reading the book very soon.

The book sounds interesting. thanks.

congrats on the new release

@Emmaline - HI!
Thank you for letting us know about this problem. I already wrote to Pinterest and I'm waiting for their response. The problems started when P introduced the "Claim blog" feature.
Anyway, I tried to pin the image from the button within Raffle form and it worked. If you didn't try already, please, try it.
Good luck!
:)

Please, try now and let me know. I just read Pinterest team answer and they fixed the problem. Thank you for pushing me to do it! They were great resolving the issue so fast. I really hope that everything will be OK from now on.

Just read Pinterest team answer and they fixed the issue. They did it real fast :) I hope everything will be great from now on.
Thank you for pushing me to write them.
We defeated the "big, bad Spam Warlord"

This is a great blend of the two series going on. Dragos and Warlords

This is a great cover I really like it

Hi Gail;
Love the cover it's gorgeous! I tried to do the pinterest entry and it wouldn't take it. I went to Your pinterest page and pinned this one and it took it so I hope that was okay.
https://pin.it/3zfrvwdls4ohxh

I am fascinated by what I have read about this book! Looking forward to reading more!!

This sounds great! Thanks for sharing! ❤