unleash her passion and creative spirit... The Renaissance Club by Rachel Dacus

"I really enjoyed The Renaissance Club and found much to admire in it on a number of different levels. I loved the imaginative use of the time travel aspect to provide an insight into Italian art of the Renaissance and the Baroque without feeling that I’d sat through a lecture on art history. " - Cathy, Goodreads 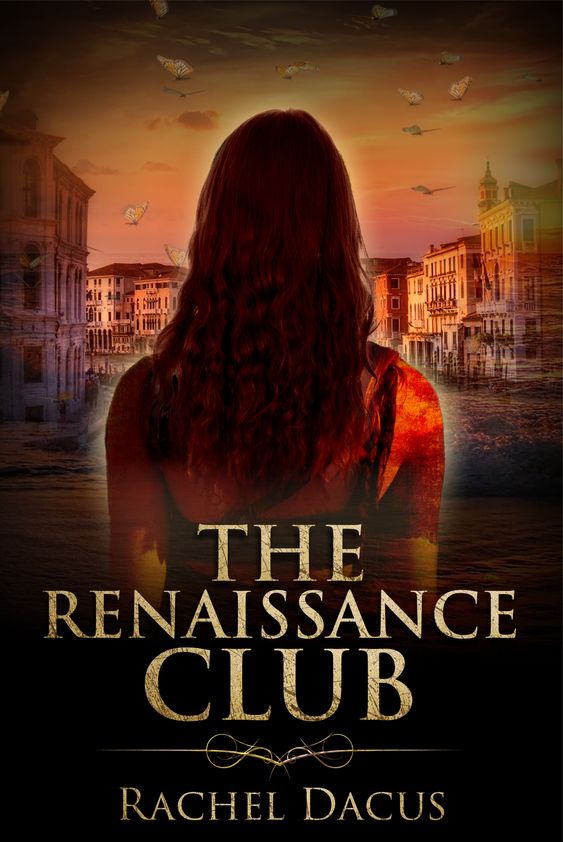 Would you give up everything, even the time in which you live, to be with your soul mate? That's what young art historian and teacher May Gold must decide when she slips through time's folds to meet the man of her dreams and the subject of her master's thesis -- fiery 17th century genius artist Gianlorenzo Bernini.

In her fantasies May is in his arms, the wildly adored partner of the man who steered Renaissance art into the Baroque. In reality, she has just landed in Rome with her stodgy boyfriend and teaching colleagues for a tour of Italy. She yearns to unleash her passion and creative spirit.

When the floor under the gilded dome of St Peter's basilica rocks under her feet, she finds herself in the year 1624, staring straight into Bernini's eyes. Their immediate and powerful attraction grows every time she meets him during the tour. Passion blossoms, but history says they have no future. Can May thread her way through time, and will she take a perilous risk to begin a magical, exciting new life?

This time travel romance is perfect for lovers of Italy, art, and love stories.

I’m a huge fan of Broadway musicals. I don’t go to every musical, but with YouTube you don’t need a ticket to hear Broadway’s best. I did go to go to Hamilton, and I can rap almost every word of most of the musical numbers—I’m that fangirl about it!

In every musical, there a show’s quintessential song—THE “I WANT” SONG. When I’m writing a story, I’m thinking about its songs, and most of all its desire song, the main character’s “I want” anthem.

The Renaissance Club has a desire song embedded in page one—an opening number that says everything May Gold wants and feels she’ll never have: a creative life, respect for her work as a historian, and most of all passionate love. But here she is, in the most passionate and beautiful country in the world, Italy. She’s ready to meet her greatest hero, only he happens to be 500 years dead. The 17th century’s genius sculptor Gianlorenzo Bernini is the one she knows she’ll meet in marble, at least, as she and her teaching colleagues tour Northern Italy.

But in fiction as in Broadway, we don’t let a little thing like death stop a good love from happening. “I want,” May says, “more than anything, I want … to meet my hero and be swept away!” (I’m parroting my Broadway heroes, Stephen Sondheim, in his long opening Desire Song for Into the Woods, in which we hear the desire of every character sung.)

Turns out, Time can be generous. Like laundry, it can fold. May can fall backward into and when she’s in front of her hero’s masterpiece, she can find herself staring straight into the eyes of her desire: the 26-year-old creative genius.

Nothing like getting what you WANT to confuse and dazzle you right out of knowing exactly what you WANT TO DO ABOUT IT. What comes next is the unfoldment of how to overcome your own misbelief about the way to go after what you WANT. Because having the chance to gain your heart’s desire forces you to face the things inside that say, “You’re not worthy, capable, creative, passionate (fill in your own blanks)”.


That’s May’s story. Overcoming a little thing like Time is nothing compared to overcoming her self-doubt. The Renaissance Club’s desire song is followed by the song of frustration at not being able to keep it. And since the story is set in one of the most beautiful places in the world, with some of the most beautiful art, May’s Desire Song descant would be, “I left my heart in Bella Roma.”

He lowered the rod and at last, smiled. Historians had written that his smile could charm anyone, but he had never been painted smiling. What a shame.

“Why are you, a woman, studying my art?” His voice wasn’t deep but it was vibrant, with an Italian lilt. “Women only study languages, lute playing, babies, and needle work.”

“I’m a different kind of woman.” She remembered what a range of women he had known, from models to noblemen’s wives. In his era, women’s decent occupations could be listed in five lines.

“I do not wish to be rude, but because of your sex you cannot study art.”
“I’m an exception.” She enjoyed the way that startled him.
“What are you called?” he demanded.
“My name is May Gold.”

He bowed. “Signorina May Gold, Cavaliere Bernini is at your service! Your golden skin makes me think you are perhaps from Egypt, where women aren’t properly schooled in manners.”

She smiled at what he thought would be an insult. “I’m half Italian and half Jewish. And I am a student of your work, despite my sex.”

His superior certainty made the sarcasm pinch, but she knew he couldn’t easily understand. She might as well tell him what he would find unbelievable. “I’m a historian studying Baroque art, and you’re the focus of my study.”

He laughed loudly. “A woman historian? Impossible! And I know nothing of your Baroque. I am merely—” he bowed insincerely “—a genius of sculpture and architecture.”

About the author:
Rachel Dacus is a poet, essayist, and novelist who writes about love and relationships, with a touch of the supernatural. Love and history are the themes of her debut novel, The Renaissance Club, a tale of romance between a young art historian and her hero, the fiery 17th century Italian sculptor Gianlorenzo Bernini. Praise for her novel — “enchanting, rich, and romantic” — describes the kinds of love and adventure stories Rachel enjoys, preferably set in exotic places. She has traveled to Italy and India and plans to expand her journeys beyond countries that start with the letter “I”.

She’s the daughter of a bipolar rocket engineer who worked on missiles during the race-to-space 1950’s. He was also an accomplished painter.

Her interest in Italy was ignited by a course in Renaissance art history that culminated in tour of northern Italy. She’s been hooked on Italy ever since. Her essay on Italy, motherhood, and infertility was anthologized in Italy, a Love Story: Women Write About the Italian Experience.

Dacus shows off her versatility in four poetry collections. Her newest is Arabesque. Three other collections are: Gods of Water and Air, Femme au Chapeau, and Earth Lessons. She raises funds for arts, human service, and healthcare organizations and takes walks with her way-too-smart Silky Terrier.

Find out more about Rachel Dacus and The Renaissance Club:

Website ** Goodreads ** Twitter ** Facebook
Author's Giveaway
Rachel Dacus will be awarding a $20 Amazon or Barnes and Noble GC to a randomly drawn winner via rafflecopter during the tour.


the more you comment, the better your chances of winning
a Rafflecopter giveaway
Posted by CCAM at 10:30 AM