"Every story in this collection is so unique and well done that it made me want to have each one as a separate novel because I either wanted to know more or I thought it would make for a great book. Not that the stories weren't great on their own; in fact, they were straight up breathtaking. [...] I would highly recommend this anthology. I loved it to bits and enjoyed reading it." - Sarika, Goodreads 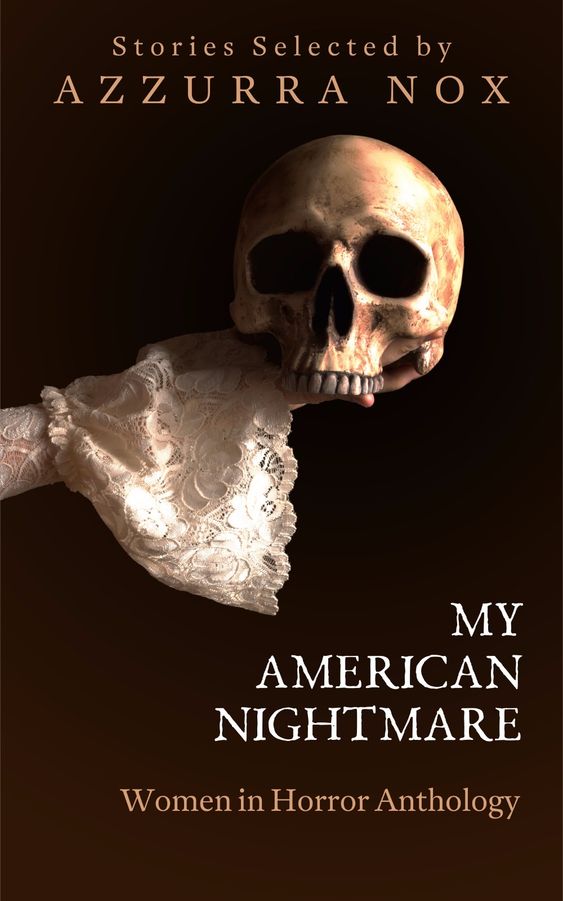 America, land of the free, land of the brave, land of nightmares? A group of female authors come together in this collection of creepy tales and psychological horror stories to bring you chills and disturbing images that won't leave you long after you're done reading. From zombies to rural small towns, to the foggy New England to the glamour of Hollywood, each story focuses on a diverse aspect of living in America and the horror found in bullying, being the “new girl,” starting your first job, and navigating the murky waters of adolescence and all the terrifying changes that come with it. Bold and haunting, My American Nightmare encompasses daring stories from new voices in the horror genre. This collection will unsettle your nerves and linger in your mind, demonstrating that women can show you a nuance of horror that isn't always evident from the male perspective.

Dare to take a walk on the dark side.

Angela Sylvaine – The Ballad of Sorrow and Lila
Amelia Kibbie – We Kill The Skullman
R. A. Goli – Mr. Buttons' Tea Party
Jamie Kahn – The Poison & The Ivy
Rachel Bolton- The Girl & The Yellow Wallpaper
The faces in the flowers were more pronounced than usual that night. Big eyes, gaping and expectant, seemed to blink back at her. Lizzie dismissed the idea immediately. Paper did not blink. Nothing could move in the room, except her. But the yellow faces had a more human quality the more she looked. They were women’s faces. Lizzie found something feminine in the shape, warped as it may be. The heads in the wallpaper appeared to tilt to the side, violently, like their necks had been snapped.

Hillary Lyon - Boys' Night Out
Nicky Peacock – She Looked Like Krystal Sparkle
Spinster Eskie - Angie's Change
Sheri Kreitner - The Pickman Sisters of Salem
Sierra Ryan – Volunteer
Kara Nelson - The Eye
E.F. Schraeder – Night Moves
Andrea Teare – 39 Days
Heather Miller - The Stars
Marnie Azzarelli – When Evacuating Pennsylvania
Erica Ruhe - Perle
A muscle flickered in that clean-shaven jaw. “Step out of the vehicle.”
I hesitated. Another bang.
“I said step out of the vehicle.” Singer popped the snap on his holster. “I’m not gonna ask you again.” Dog whimpers urged me to comply.
My shoulders slumped. I released the latch and fought open the stiff door. It protested with a loud, long squeal.
“Now what is in the back of this truck?”
Still I hesitated, puckering my lips in a coy attempt at innocence.
“My stepdad.”

Phoebe Jane Johnson - Ruby
Azzurra Nox - Whatever Happened to Peyton Rose?
“Jesus,” she whispered, not sure if anyone could hear her. The dolls made her feel unsettled as they stared back at her with vacant eyes. Peering down, a scream escaped her throat when she realized that their plucked eyes were scattered on the bed. She pushed the comforter off of her. The eyes fell down, making a sound similar to marbles crashing to the floor as she ran for the door.

Frantic, she opened the door and stood upon the landing. She looked to and fro, not knowing what direction to run to next. Don’t panic! She told herself. And yet, her hands were shaking.

About the Azzurra Nox :
Born in Catania, Sicily, Azzurra Nox has led a nomadic life since birth. She has lived in various European cities and Cuba, and currently resides in the Los Angeles area. Always an avid reader and writer from a young age, she loved entertaining her friends with ghost stories. She loves horror movies, cats, and a good rock show. She dislikes Mondays and chick-flicks. CUT HERE, her debut paranormal urban fantasy was inspired by a nightmare the writer had a few years ago. Some of her favourite authors include Anne Rice, Oscar Wilde, Chuck Palahniuk, and Isabella Santacroce.

Oh this sounds like an awesome book. I love creepy.

I do love scary stories. This sounds right up my alley. Such a great cover!

great cover, this sounds like my kind of book, thanks

I think the cover is scary.

the cover is creepy and i love it@