"I very much enjoyed this book, the world building is complex and has a lot of depth. Characters are relatable even though the situation is strange. [...] Good dystopian fiction makes us think about what people will do to survive, the good and the bad, and this book does not disappoint."- Kasey, Goodreads 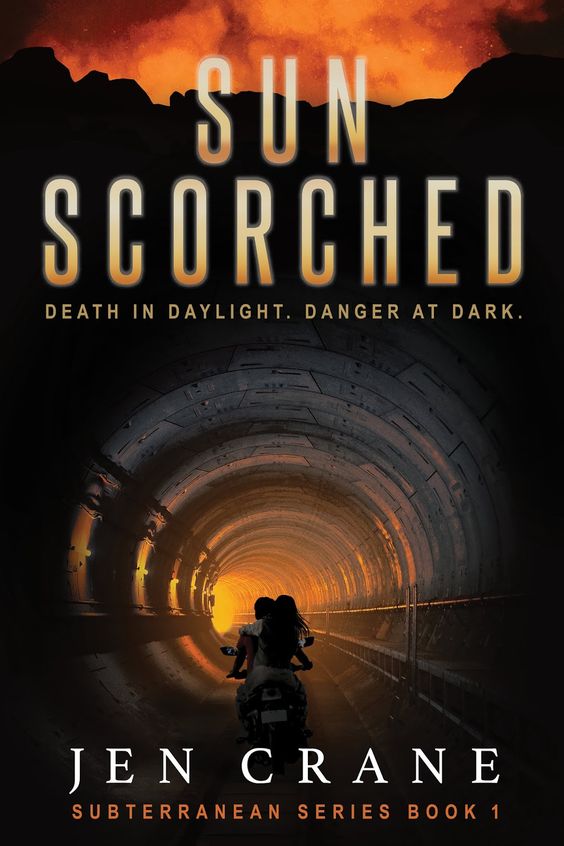 Death at daylight. Danger at dark.

Life can’t possibly get more treacherous than a violent sun allergy in a solar-blighted world. At least that’s what seventeen-year-old Nori Chisholm thought before news of an impending sunscorch delivered her death sentence.

Desperate to survive the scorch, she’s forced to shelter underground and discovers a secret subterranean world where life is hard, and so are the people. Betrayed and left for dead by the man who pledged to help her, Nori is sold to a gritty pit fighting ring. There she makes a friend—and plenty of enemies.

Speeding by motorcycle through the underground world, Nori makes a shocking discovery that shatters everything she thought she knew. Can she use the knowledge to save what’s left of the world?

Winner of the Rosemary Award for excellence in young adult fiction, Sunscorched is a tale of survival and self-discovery at breakneck speed. Fans of Bella Forrest and Marie Lu, who crave dangerous heroes and dark secrets, will love the Sunscorched world.

A trail of blood disappeared beyond the door of the small foyer. The man Nori rescued lay face-up, the knot near his temple swelling fast. His leg oozed blood, the scarlet pool closing in on the tiny corner of space Nori occupied. When she found the wound—and the gaping tear in his leather riding pants—dread settled in her gut. The bleeding would have to be stopped if he was going to survive, which meant she had to do it.

Nori groaned and scrubbed her eyes, then set to work. She sifted through her backpack for something to tie around his wound, finding both a pocketknife and the thick, sun-blocking canvas she always kept nearby. She ripped a long strip of the fabric and wrapped it several times around the man’s injured thigh.

“Probably a good thing you can’t feel this,” she said to his unconscious form and, catching another look at the knot on his head, grimaced. “You’re gonna have a pretty bad headache, too.”

After tying the two ends together, Nori sat back to admire her work. Blood had soaked through most of the bandage, but it wasn’t seeping onto the floor anymore, at least.

Mom and Dad are probably freaking out by now, Nori thought. Curled in the corner of the foyer farthest from the man, she sat with arms wrapped around bent knees. The man outside hadn’t made a sound. Maybe he hadn’t seen her. Maybe he’d left. Or maybe he was waiting just outside the door.

Nori rocked back and forth, forehead pressed to her knees. Finally, she let out a long breath and stretched her legs. She was leaving. She’d saved the stranger. Twice. He was hidden in the foyer, and when he came to, he could find his own way back to safety.

Bracing herself on the wall to stand, she kept as far as possible from the unconscious body between her and the door. Stretching over him to reach the door, she extended one leg, straddling him only a moment until she lifted the other to join it. But as she raised her back foot, the front one was knocked from under her, sending her roughly down onto her butt. She yelped and looked wildly around, scurrying back to the foyer wall. Hands in front of her face, she prepared to defend herself as best she could.

“I’m not going to hurt you,” he said. His voice was deep, but not threatening. “Where are we?”
Nori flattened her palms to the wall, pushing herself against it to stand again. She didn’t answer.

The steely eyes from the alley focused on her face. He surveyed her hair, her shoes, and her clothes before finding her eyes. 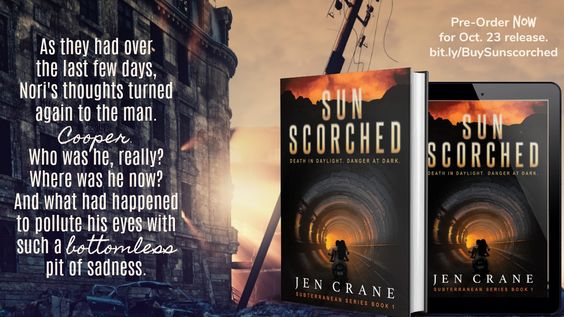 Nori nodded as she edged toward the door—and the street.

“What were you doing with a book?” he asked.
“Reading,” she said, pinning him with a look that seriously doubted his intelligence.

Dark eyebrows lowered over narrowed eyes. “In the dark?”

Nori bit the inside of her cheek. “Of course not,” she said. She’d been running in the dark, not reading, though she often did. But he didn’t have to know that. “It was in my backpack from earlier today.”

He squinted, as if he didn’t quite believe her. “What happened to your face?”

She reflexively touched the pink patches, a fresh new layer where sun-damaged skin had peeled away. The pink was fading, but not entirely healed.

“Sunburn,” she said. “Stayed out too long.”
“That happen a lot?”
“What business is it of yours?” she snapped. “And you can say ‘thanks for saving me’ anytime.”

His eyes shot down for a moment before he lifted them to meet her gaze. “Thank you.” His voice was quieter, sincere. “I know you put your own life at risk. Thank you for saving me.”

“Twice,” she said. “I saved you twice. Once with the book, and the other by hauling you in here when you were unconscious to bandage your leg. Technically, I guess that’s three times.”

“All right.” His lips twitched. “I owe you one. Or three.” As if he hadn’t noticed it before, he looked down at his thigh and then back to Nori. “First time to make a tourniquet?”

She lifted her head. “You were bleeding all over the floor. I did the best I could with what I had. What happened to you, anyway? You must’ve lost a lot of blood to pass out like that.”

“I tried to clear a chain-link fence, but my leg caught.”

Nori looked at the bandage again, but quickly averted her eyes from the exposed skin of his thigh. She cleared her throat. “Why was he chasing you?”

He shrugged.
“You’re not going to tell me?” she asked.
He shook his head, all nonchalance.
“Fine.” Nori huffed a breath. “What’s your name?”
“Cooper.”
“That your first name?” She asked and extended her arm toward the door handle, making sure she could escape if necessary.
“It’s what people call me,” he said. “What’s yours?”
She didn’t answer as manners battled with self-preservation in her brain.
“Oh, come on,” he goaded. “You can’t ask to see mine and not show me yours.”
“Nori,” she said quick and low. The concession pained her.
“That your first name?” he shot back.

She scowled, and he threw up his hands in defense. “Okay, okay. I’m just messing with you. Anyway, thanks again for the help, Dory.”

“It’s Nori.”
Cooper nodded, an amused smirk tightening his lips. “Thanks, Nori.” He rose slowly, hopping on one foot at first, and reached for his backpack in the corner. As he slipped it over a shoulder, he stopped and caught her gaze again. “Why’d you help me—three times? You didn’t have to.”

“I did have to,” she said. The answer came easily. “You were in trouble, and I could help. No brainer.” 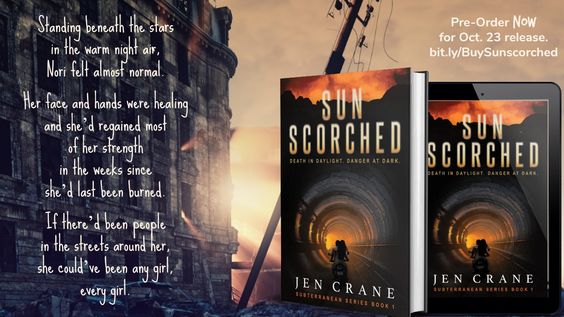 “Kindness is not so common as you think,” he said lifting his chin and narrowing his eyes as if trying to get a better read on her. “How long have you been like this?”
“Like what?”
“You burn easy. And you can see well in the dark, right?”
“I’ve been this way my whole life.” The answer was smooth, and without thought. Nori gasped and balled her fists when she realized what she’d revealed. Her condition wasn’t a secret, though it was a mystery. But she didn’t like a stranger knowing so much about her. And she hated that he’d gotten her to talk so easily. Her teeth creaked under the pressure of her jaws.

“Anyone else up here like you?” Cooper closed the distance between them and searched her eyes for an answer. “You know anyone else who burns like you do? Who can see better in the dark?”

She shook her head, blinking in incomprehension. “How do you… What do you mean? What do you know about it?”

“You should go,” he said and pushed open the door.
“No.” Nori pulled the door shut, her heart thundering in her chest. “Tell me how you knew to ask those questions. Do you know someone else like me?”

Cooper let out a long breath, his wary gaze never leaving hers. “It’ll be light soon,” he finally said. “If you want to make it home in time, you’ll already have to run like hell.”

He turned to open the door again, but Nori stopped him. “Wait.” She fumbled for something to say. “Do you live around here?” She threw on her own backpack, wishing to know something about the man who knew so much about her.

“Right under your nose,” he said, and with one last nod, ran from the foyer, into the dark alley, and out of sight with no noticeable limp.

As Nori watched him go the shadows changed, and her heart seized. The sun was on the rise. “Stupid,” she told herself, racing home on shaky legs. “Stupid, stupid, stupid.”

About the author:
Though she grew up on a working cattle ranch, it's fantasy and sci-fi that shine Jen Crane's saddle. Her latest novel, Sunscorched, received a Rosemary Award for excellence in young adult fiction.

Jen has a master's degree and solid work histories in government and non-profit administration. But just in the nick of time she pronounced life *too real* for nonfiction. She lives in The South and creates endearing characters and alternate realms filled with adventure, magic, and love.

Book 2 in Jen's fantasy romance series, Descended of Dragons, was selected by iTunes/iBooks as "Our Pick" in fantasy/sci-fi.

Sign up for Jen's newsletter to get release updates and freebies. 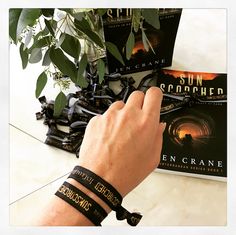 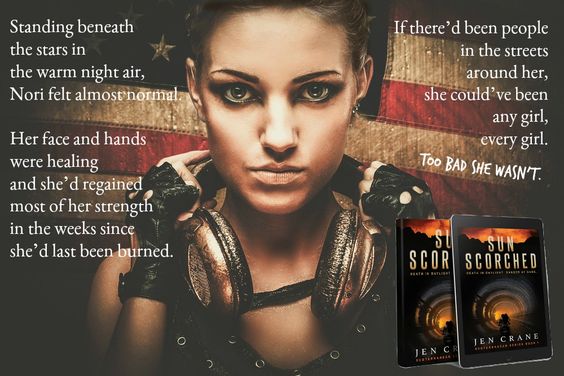 Thanks for posting! I think readers will love Nori and Cooper's dark ride through the gritty Subterranean.