What’s not to like? - Transcending Fire (New World Bikers #1) by Casey Moss

A man dealing with an Earth in chaos. A woman from an alternate universe hoping to find her destiny. Two motorcycle gangs and a real bad ass who wants to ruin everything.
What’s not to like? 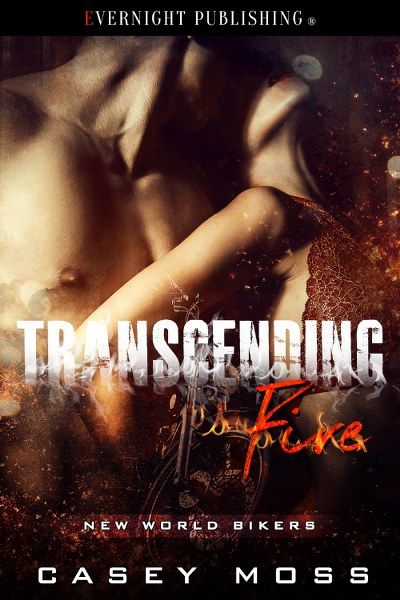 Hunter Macario wants one thing—a place to belong. When given an opportunity to solidify his position in the Devil’s Thunder MC, he takes it.

Dragon’s Clan member, Safaia King, believes she’s found the man from her people’s legend and her dreams. She has one goal, even if he’s in a rival club—to make Hunter hers and keep him safe so he can fulfill their destiny.

After Hunter makes a huge mistake, he’s sent to where Safaia lives—an alternate universe called The Den. In this new world, sex, battles, and secrets abound. Hunter must survive The Den to right some wrongs or else he could lose everything he’s ever gained, including his home and Safaia’s love.

I started writing this story in the spring of 2015 for a special line (a series based off of fairy tales) at another publisher. While doing some research, I found some interesting tales that immediately piqued my imagination, and the contact person at the publisher chose one from a list I’d submitted. When I started writing my version, the story just flowed out of me. I absolutely loved it! Then, when I was ready to submit, I reached out to the publisher to make sure I had all my ducks in a row and was told they’d closed that line and no longer were accepting submissions for it. Needless to say, I was pretty bummed. I took some time to put the story through another draft, expanding it twenty thousand words or so. In the beginning of 2016, I submitted it elsewhere and a couple weeks later, I learned that publisher was closing. So I withdrew it from that submission process and off it went to yet another publisher. After some lackluster communication on their part, and even though they were interested, we discussed my ideas for the “series” and then came to the conclusion that the “series” wouldn’t be a fit. I say “series” because I have the outlines for book 2 and book 3 done, but not the stories yet, and that didn’t fit their guidelines. They wanted all the books up front, and I don’t know how long it’ll take to write the next ones, so to be fair, we passed on each other. That was early summer 2016.

To say I was disappointed in the whole submission process would be an understatement. I really liked this story, but I had a slight fear of putting it out there again. I put the story to the side, and after about a year and making sure it was still pretty, I sent it to Evernight, where it found its home. Even with all the trials the manuscript went through, I still love this story. It’s one of my favorites that I’ve written, and one that I didn’t get tired of during the editing process either. Yay! LOL!

Here’s a brief blurb: A man dealing with an Earth in chaos. A woman from an alternate universe hoping to find her destiny. Two motorcycle gangs and a real bad ass who wants to ruin everything.

Now, without further ado, here’s the information about Transcending Fire…

About the author:
Casey Moss delves into the darker aspects of life in her writing, sometimes basing the stories on reality, sometimes on myth. No matter the path, her stories will take you on a journey from the light-hearted paranormal to dark things unspeakable. Casey's passion lies in darker fiction. Her stories fall under the categories of horror, paranormal, suspense, thriller and urban fantasy. Sometimes there's a blending of those genres in one story. Sometimes there are romantic elements within the books -- be sure to note the rating. Some of the stories are even set within her home city of Las Vegas. But if she's done her job right as an author, all the stories should set you on edge, leave you craving and wanting to explore more of the dark. What waits around the corner? Come explore...

Not in the mood for dark? Looking for romance and steamy sex? Check out Casey's alter ego, C.R. Moss.

Thank you, Stephanie, for stopping by and for the lovely comment. Much appreciated. And, thank you to my host for having me on your blog. Have a fab day all!
=)
Casey

It's hard to hold onto your house in the best of circumstances but this is crazy.

I was wondering what the author has planned for the next book?

I was wondering where the author gets the ideas for the book from?

Hi all. Thanks for stopping by and leaving comments. Much appreciated! :)
Plans for the next book - Hunter and Justin will find information left behind by Screw and learn how things ended up the way they did. There will be a pair of characters who find love as they face a changing world. Transcending Fire is loosely based on a folktale so that's how this story came to be. The next book - part of it is a story i came up with after watching shows on how to survive apocalyptic events and part of it is again loosely based off of a folk tale.
As for my favorite book... So many to choose from... But I'll take a line from one of my guest posts - My most favorite book by Jude Deveraux is Remembrance.
=)
Casey

Thanks for answering all of our questions Casey. Do you write in different genres or concentrate on one?

You're welcome!
To answer your newest question, I currently write lots of different sub-genres under the romance umbrella, but I do have a few horror stories in the works.
=)
Casey

Happy Halloween? Any plans for halloween? Dressing up?

I was wondering what your writing process/routine was like?

This Halloween I didn't do much. Turns out I caught a bug that's been going around :( so I was down for the count.
As for my writing process/routine, I normally like to do a light outline/guideline of the story, write out scenes long hand and then flesh out the story as I type it into a document. Then I do an edit, send it off to crit partners, do another edit and off it goes.

I bought 3 bags of candy and only one trick or treater! I hope you are better now!

If you book was made into a movie who would you want to star in it?

Thanks for the great questions! =) Casey