a legion of voices screaming out through the killers’ mouths - The Year of the Knife by G.D. Penman

"I was hooked after first few paragraphs, this book is soo good.
The story is fast paced, there is no dull moments, non stop action and writing is really good. Story grabs you from the first moment and you can't put the book down till the very last pages." - Anie, Goodreads 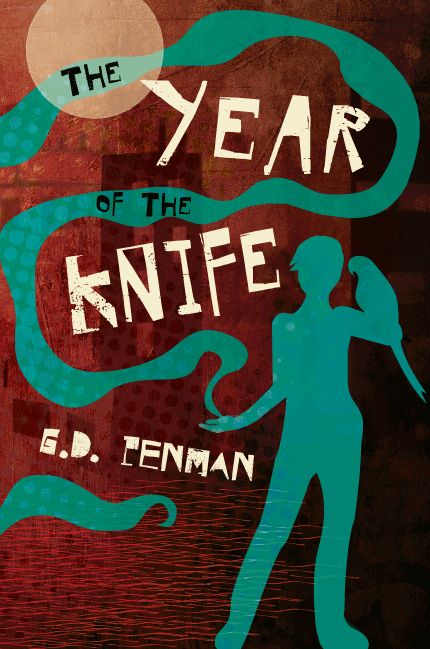 Agent -Sully- Sullivan is one of the top cops in the Imperial Bureau of Investigation. A veteran witch of the British Empire who isn’t afraid to use her magical skills to crack a case. But Sully might need more than a good education and raw power to stop the string of grisly murders that have been springing up across the American Colonies. Every one of them marked by the same chilling calling card, a warning in the form of a legion of voices screaming out through the killers’ mouths: -It IS tHe YEAr oF the KNife.-

Sully’s investigation will drag her away from the comforts of home in New Amsterdam, the beautiful but useless hyacinth macaw that used to be her boss, and the loving arms of her undead girlfriend, in a thrilling race against time, demonic forces and a shadowy conspiracy that will do anything to keep its hold on power and ensure that Sully takes their secrets to her grave, as soon as possible.

G.D. Penman’s imaginative The Year of the Knife is a fun, fast-paced urban fantasy mystery with an engaging set of characters, most notably Agent Sully of the Imperial Bureau of Investigation.

Inside the big old safe that was set into the foundations of the Smithsonian were several overlapping circles. The biggest was made of a solid band of silver. Then there was a ring of glass pipe that constantly circulated salt water, powered by an ancient charm that would probably outlast the building. Those were followed by rings of crystal and worked iron. The final ring was made of a brown substance that was unmistakably dried blood. Inside the rings were markings, sigils and runes from an assortment of different cultures and mystical traditions.

The room was kept cool by its position—so deep below the earth’s surface that several major fires had gutted the upper levels of the museum, along with huge portions of the city, without ever touching it. The room was as safe a place as could be made for the demon Eugene.

Eugene the Sailor Doll had been found down in Florida, not long after the first settlements were built there, sitting untouched in the burnt out remains of a townhouse. A toddler-sized doll—fairly placid in its little white sailor's uniform, face painted like a jester.  Academics and experts had researched Eugene for decades— but eventually the death toll climbed too high, and it was entombed in its current location.

When Sully entered the room and shined the torch in its direction, the doll’s head tilted just a little. That was Eugene’s way, movements tiny enough to cast doubt in the mind of the observer. Was it a trick of light? A rush of air? The air in the vault was dry and stale, with just a faint hint of rotten eggs. Sully licked her dry lips. “Are you going to give me the silent treatment all day? I thought you'd be bored by now, down here all by yourself with no one to talk to.”

With the door closed behind Sully, the only light in the room was from the torch, shining a small circle on Eugene in the center of the room. The only noise was the blooping of the circulating water making its merry passage around and around in the glass pipe. Sully very deliberately took a step forward, despite the electric sensation running up her spine at being so close. She tried again. “Will you talk to me? I have some questions.”

The doll's head tilted slightly in the other direction, its voice just as Sully had expected, deafening in the tiny chamber. “THAT IS THE INTENTION? ISOLATE ME TO WEAKEN MY RESOLVE? I AM THE VANGUARD OF THE HELLS. I AM THEIR FOOTHOLD UPON YOUR WORLD. NO SECRET THAT I IMPART WILL SAVE YOU. NOTHING WILL SAVE YOU. SET ME FREE THAT I MAY CONTINUE MY GREAT WORK OR RETURN ME TO DARKNESS UNTIL I AM RESCUED.”

Sully laughed at him. She didn't mean to—it certainly wasn't conducive to a successful interview. But it was funny watching this little doll threaten all of human civilization. It had been a tense few days with very little relief, and that was the excuse she made to herself.

The doll bellowed, “HOW DARE YOU MOCK ME? YOU OF THE TAINTED GRACE. YOU, HIDING FROM MY SIGHT BY THE COLD ONE’S TOOTH. RETURN ME TO THE DARKNESS YOU PITIFUL WRETCH. WHEN MY ARMIES MARCH THROUGH THE FALLEN ASHES OF YOUR WORLD—”

Sully cut him off. “Would you be interested in making some sort of deal?”

About the author:
G D Penman writes Speculative Fiction. He lives in Scotland with his partner and children, some of whom are human. He is a firm believer in the axiom that any story is made better by dragons. His beard has won an award. If you have ever read a story with Kaiju and queer people, it was probably one of his. In those few precious moments that he isn’t parenting or writing he likes to watch cartoons, play video and tabletop games, read more books than are entirely feasible and continue his quest to eat the flesh of every living species.

(1) GOODREADS US Giveaway
(2)
a Rafflecopter giveaway
Posted by CCAM at 3:30 PM

Any wonder I never liked dolls as a child? They're just too freaky for me! And clowns, don't get me started on clowns ...

They're lucky, the long knives only got one night.

Thank you for the opportunity!