"In DEAR DEPARTED, a dedicated illusionist intent on exposing a murderous charlatan meets a skeptical woman intent on saving her aunt's life and fortune. Sparks fly, sensuality ignites the pages, and the truth dangles just beyond reach." --Linda O. Johnston, author of paranormal romance, romantic suspense and mysteries including KNOCK ON WOOD, a Superstition Mystery 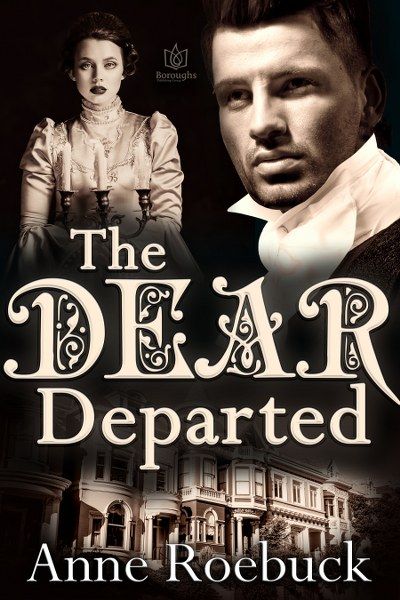 The widows of Victorian era San Francisco are dying of decidedly unnatural causes, and to expose the culprit Virginia Paley must partner with the darkly mysterious Jonathan Bradshaw, entering a world of occult rituals and unexplainable phenomena—and magical love.

Young widow Virginia Paley has no interest in attending the séances at The Society for Eternal Love, but the women of the society are dying mysteriously in their sleep, leaving their fortunes to Professor Arthur Chadwick, its charismatic medium. As her aunt might very well become the next victim, Virginia will do whatever she must to ensure that doesn’t happen. She will even join forces with the darkly mysterious Jonathan Bradshaw.

From the moment he spies her, Jonathan is smitten. But romance is impossible. Mrs. Paley is a respectable woman, and he himself is outside of society, an orphan, an ex-thief and a true wizard, able to hypnotize with a word and even separate his spirit from his body. No, he must instead remain focused on his goal, avenging his mentor’s death. But, facing a foe with power over demonic forces and Virginia’s very life in the balance, love might indeed be the only salvation.

A hundred years ago, everything looked different by candlelight or gaslight. Things were softer, less defined, more diffused. That shadow in the doorway that we saw out of the corner of our eye which disappeared once we turned around to stare at it. Was someone really there, or did we just imagine it? Or, the flickering of a candle flame. Was it caused by a sudden gust of wind? Or something else?

Everything sounded different, too. There was none of the constant background noise that surrounds us now. Sounds were more intense but less identifiable. The creaking of floorboards in the middle of the night. Was there someone there? The wind rustling in the trees in a graveyard sounded almost like voices. Could they be talking to us?

It was easier then to peer into the realms of the supernatural and hear the hushed voices of ghosts and spirits speaking to you from beyond the veil of death. It was easier to believe that both magic and love were real and not illusions.

I like the modern world. Science and technology have in many ways changed our lives for the better. But sometimes, I wonder if we have lost as much as we have gained in our highly technical society. Modern science has made our world rational and sensible. Still, what it must have been like in a bygone era when everything was less cut and dried and there was more room for magic and mystery.

For example, what must have it been like for a young widow, living in a world of respectability as tightly laced as her corset, to descend into dark and hidden realms where she is never sure what is real and what is illusion? Ghosts and spirits aren't supposed to exist, but she sees them anyway. Are they really there or are they just phantasms born out of her lonely dreams?

And the magician who serves as her guide into the hidden realms, an impossibly handsome man with arcane knowledge and a disreputable past. Is he her protector or her ruin? Is he real or just one more illusion? And will she discover an awesome reality behind all the illusions or will she just end up on the Primrose Path to Perdition?

For people like me who are crazy enough to want to look behind the façade of today’s oh-so-rational world, we find all manner of bizarre things, like hundred-year-old artifacts hidden in an attic, that seem like so many relics of a superstitious past. Elaborate rituals performed in hooded robes, incantations intoned in languages that people haven't spoken in a thousand years. Spirits, both good and evil, from beyond the grave. And bonds of loyalty and love that transcend space and time -- even death itself.

Sometimes we are tempted to get cocky or complacent and think that these things aren’t real, but are only imagination, like stories that are told to gullible children. But they are real. They are as real now as they are then. Things like magic and love.

About the author:
From my first poem at age 10 and my first short story at age 12, I can’t help writing about my two favorite things – magic and love. An unrepentant nerd, I started out in biomedical research but ended up writing software manuals instead. I spent many years as a member of science fiction and historical reenactment groups and I have been at various times a Renaissance scholar, a druidess, a pirate wench, a saloon floozy, a belly dancer and a chain-mail wearing warrior maiden.

Still, my first love is writing stories. It doesn’t matter whether the story is set in the middle ages, Victorian times, the present day or far in the future. If it has both love and magic in it, I will write about it. I write not only romance but young adult historical fantasy under the name of Ann Finnin.

I'm a native of Southern California, and I live in the hills above Los Angeles with my husband of forty years, Dave (a man who gave me an electric typewriter as a wedding present) and a dog of Indeterminate Breed named Rufus.

It might be worth good money to know you'll die peacefully in your sleep...

If you could travel back in time, what time period and where would you go?

just curious what inspires the author to keep writing

When you have writer's block what do you do to overcome it?

If your book was made into a movie who would you want to star in it.

Who are your favorite authors?

What is your ultimate writing/career goal or dream?

If you could meet any author past or present, who would it be and why?

How long did you have to take your work around before it was published?

What made you want to become a writer?