The day darkness descends - Of Dreams And Dragons by Karpov Kinrade 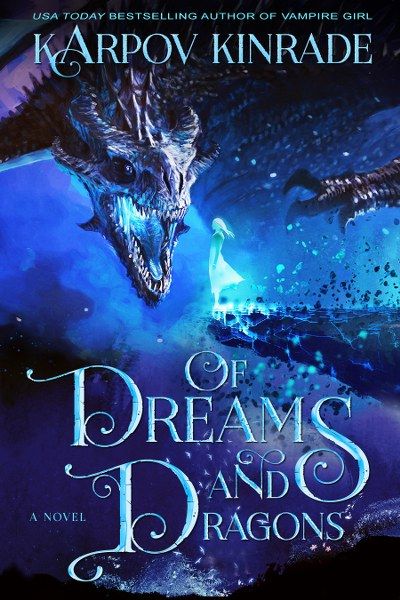 From USA Today bestselling author, Karpov Kinrade, Of Dreams and Dragons begins an incredible tale of magic and wonder and love. For fans of Throne of Glass, Harry Potter, and Game of Thrones, experience a story of epic proportions.

The day darkness descends into my life begins like any other.

Taking care of the kids I call my own. Fighting fires in my small Northern California town. How could I have known evil walked my streets and would soon rip apart my world?

But death comes for us all, and when a stranger with mysterious abilities shows up demanding payment for a promise I never made, I refuse. When he kidnaps my baby sister, I fight back.

And I discover the power of the dragons within me.
Now, I must leave everything behind and travel to a world of magic and wonder in order to train with a charismatic dragon lord, in the hopes that one day…

I can save my sister.

Or make her killer pay with blood.

But nothing in this world is what it appears. And my closest friends are keeping secrets from me.

Secrets that could tear the worlds apart.


I brace myself for the cold shock of water, but instead emerge into a sea of stars. A night sky never ending. I float through the darkness, as if there is nothing but space around me. No air. No water. Only cold. Only night. And the stars and planets and moons shimmering in the unspeakable distance.

There is the sound of water breaking. I look up and see Kaden appear from nothingness. His scarf and coat and hair drift up slowly, as if he were sinking, and he moves through the space as if swimming, until his arm is touching mine.

I want to speak, but I dare not let the air out from my lungs. I do not know if I can breathe in this strange place. Kaden gestures for me to follow him, then swims forward, toward a ring of golden light. A nebula, I think I’ve heard it called. I follow Kaden, paddling through the sky, and find that moving here is much like moving through water, but easier and faster, as if there is no friction of any kind. It's like my dreams, where I would fly as if swimming. I wonder if I am really in space, but I cannot be. I would freeze to death.

The nebula grows larger before us, until it covers all my vision with gold. Up close now, I realize it’s not a multitude of stars as much as a wall of light. Or perhaps it changed as I grew closer. Kaden swims past me, disappearing behind the golden hue. For a moment, I hesitate to follow, but there is no turning back now. I reach out with my hand, touching the light. It feels soft and smooth and warm. With one final push, I plunge forward, letting the sea of stars engulf me in its warm embrace.

My head breaks through the surface, and I emerge as if from a deep dive, gasping for air. I stand in a shallow pool of crystal clear water, my feet touching sand that was not there before. The air is thinner here. The wind weaker. And the heat stronger.

It is bright. Night has turned to day, the sky a clear blue. Lush green bushes that look like the tops of palm trees circle the pond we just stepped out of, and thick vines fall from taller trees. Dense emerald grass covers the ground, and small purple flowers that sprout in clusters dot the landscape. Far above, I hear a shrill bird call, then a chorus of responses from the nearby trees, a beautiful song reverberating through the air.
Past the trees and the grass, past this little oasis we have landed in, is an endless horizon of silver sand shining too brightly in the sun. An endless stretch of desert with no signs of life, at least above the surface. “Something is wrong,” says Kaden, walking out of the water, his clothes dripping onto the grass. “We were supposed to arrive closer to the Cliff. This place…” His words trail off, and he stands silent, looking at the sky.

I walk onto dry land, my wet clothes rubbing against my skin. At least it’s warm. I’d be freezing in the wind. “What happened? Your fountain portal broke or something?”

“They’re not portals,” he says, “not really. It’s more about the stars.

When the stars align over certain bodies of water, that water can be used to travel between worlds. All one needs is a travel talisman and the knowledge of which stars align where and when. It changes from month to month, year to year. It’s not a simple science, but I was certain we should have arrived miles north of here.” He pauses, frowning. “I heard whispers… talk of the stars fading, the light dying…”
I raise an eyebrow. “Care to explain what you’re mumbling about?”
He turns to me. “Some say this world is ending. That soon our magic will fade away and the light will vanish. That darkness will come. Of course, there are always those who speak of the apocalypse and there always will be. I gave no credence to it, but the stars…” He shakes his head. “I must have made a mistake is all. Simple as that.”


“That place…” Kaden clenches his fist. “That place is where my best friend was murdered.”

Goodreads ** Amazon
About the author:
Karpov Kinrade is the pen name for the husband and wife entertainment duo Lux and Dmytry Karpov-Kinrade, aka The KK Duo.

Together, they write award-winning, internationally and USAT bestselling books, make music, create art, write screenplays and direct -- all the things.

Look for more from Karpov Kinrade in the Vampire Girl series, The Nightfall Chronicles and The Forbidden Trilogy. If you’re looking for their suspense and romance titles, you’ll find those under Alex Lux.

Check out their music by clicking on the Music tab.

They live in wine country California with their three offspring who have crazy creative genius oozing out of them in the form of music, art, performance, and all the things, and too many cats who all think they rule the world (spoiler alert: they do).

Author's Giveaway
a Rafflecopter giveaway
Posted by CCAM at 3:15 PM

I saw dragons and had to come check it out. Thanks for sharing.

Lux and Dmytry sound like they have a wonderful family life! What are their plans for the future?

Of Dreams and Dragons sounds great! Thank you

I was wondering what the author's writing process/routine is like?

I was wondering who is your favorite author?

If you book was made into a movie who would you want to star in it?

thanks this sounds great

I was wondering what you do when you get writer's block?

What's your favorite book that has dragons in it?

DO you have any book recommendations for us?

HOw long did you submit your work before you were published?

What are your plans for the holidays?