“A fast-paced and frightening ride. Highly recommended for fans of creature horror and the thrillers of Michael Crichton.”—The Horror Review on PREDATORY INSTINCT
“McBride writes with the perfect mixture of suspense and horror that
keeps the reader on edge.” —Examiner 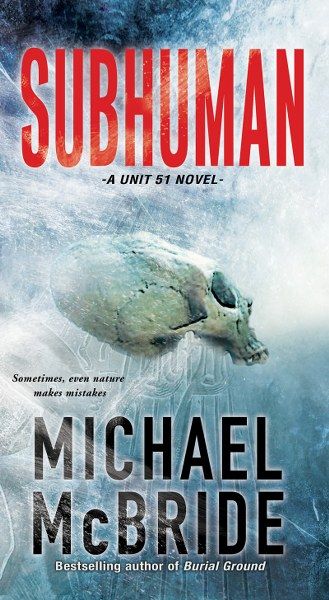 THEY ARE NOT HUMAN.
At a research station in Antarctica, five of the world’s top scientists have been brought together to solve one of the greatest mysteries in human history. Their subject, however, is anything but human . . .
THEY ARE NOT NATURAL.
Deep beneath the ice, the submerged ruins of a lost civilization hold the key to the strange mutations that each scientist has encountered across the globe: A misshapen skull in Russia. The grotesque carvings of a lost race in Peru. The mummified remains of a humanoid monstrosity in Egypt . . .

THEY ARE NOT FRIENDLY.
When a series of sound waves trigger the ancient organisms, a new kind of evolution begins. Latching onto a human host—crossbreeding with human DNA—a long-extinct life form is reborn. Its kind has not walked the earth for thousands of years. Its instincts are fiercer, more savage, than any predator alive. And its prey are the scientists who unleashed it, the humans who spawned it, and the tender living flesh on which it feeds . . .

IT HAS SURVIVED
At a research station in Antarctica, scientists discovered a strange and ancient organism.
They thought they could study it, classify it, control it. They couldn't.

IT HAS THRIVED
Six months ago, a secret paramilitary team called Unit 51 was sent to the station.
They thought the creature was dead, the nightmare was over. It wasn't.

IT HAS EVOLVED
In a Mexican temple, archeologists uncover the remains of a half-human hybrid. They believe it is related to the creature in Antarctica, a dark thing of legend that is still alive--and still evolving. They believe it needs a new host to feed, to mutate, to multiply. They're right. And they're next. And the human race might just be headed for extinction...

After millennia beneath the ice, the frozen continent of Antarctica is finally starting to give up its secrets, and what amazing secrets they are. A 13,000-year-old meteorite containing fossilized bacteria believed to be of extraterrestrial origin. The remains of a cat-sized, egg-laying, distant relative of modern mammals. Bodies of water the size of the Great Lakes encapsulated beneath two vertical miles of ice and brimming with the kinds of extremophilic organisms responsible for the genesis of the planet’s earliest atmosphere. And now, an entire system of caves heated by geothermal energy and capable of supporting not just higher orders of life, but species believed to exist nowhere else on the planet. 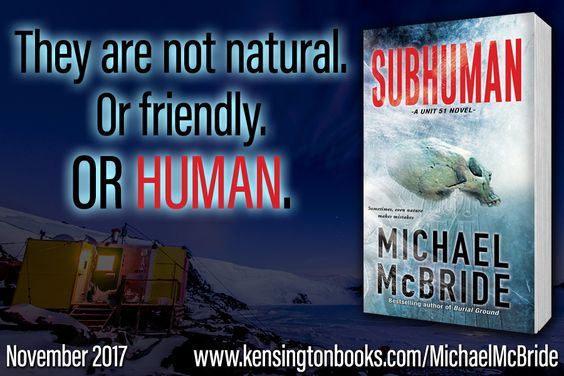 How did these enigmatic organisms survive? How did they wind up at the bottom of the world in the most hostile environment on the globe? Scientists are racing to Antarctica and braving the vicious elements to find the answers to these questions, answers that could potentially change our understanding of the origin—not to mention the future—of all life on Earth.

In a case of life imitating art, this is precisely the scenario I envisioned when I sat down in the spring of 2016 to write Subhuman, the first book in the Unit 51 Series. These extant species have beaten seemingly insurmountable odds to survive and triumphed over environmental pressures undoubtedly capable of triggering unbelievable feats of evolution. And on a continent so desolate and in such a brutal climate, you have to figure that any physical mutations have the potential to be truly frightening.

Check out this article from the National Post and then track down a copy of Subhuman, coming this November from Kensington Publishing, available wherever books are sold.

About the author:
Michael McBride was born in Colorado and still resides in the shadow of the Rocky Mountains. He hates the snow, but loves the Avalanche. He works with medical radiation, yet somehow managed to produce five children, none of whom, miraculously, have tails, third eyes, or other random mutations. He writes fiction that runs the gamut from thriller (Remains) to horror to science fiction (Vector Borne, Snowblind) . . . and loves every minute of it. He is a two-time winner of the DarkFuse Readers' Choice Award.

I guess those ancient tombs really do hold a curse. Curse those meddling archaeologists!

Something catastrophic could happen, an unlike disease or compound could cause harm we don't know about.

These type of books are especially scary because humans tend to think we are on top and we have control over everything.

I was wondering what the author is writing for us next?

I was wondering what your favorite book is?

Do you ever get writer's block? If so what do you do to overcome it?

Do you write books in different genres or focus on one?

Who is your favorite author?

What is your ultimate writing/career goal?

Do you have plans for the thanksgiving holidays?

How long did you have to submit your work before getting published?

what are you most scared of for our world?

How many books do you typically read per month?

What do you want for Christmas? Do any black friday or cyber monday shopping?

Thank you so much for the chance to win, wishing you much luck and success in your writing!