"Fast paced, thrilling, and exciting you can’t find a better story to read. I love to read fantasy and loved the protagonists being half -elven, it had a new look. Those who enjoy fantasy will enjoy this read." - Goodreads, The Pen &Muse 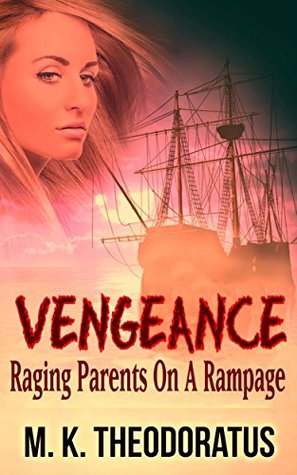 After four centuries of political infighting with Linden, the ruler of the Marches, all Mariah wants is a little peace and quiet. Then, privateers attack her daughter's family, leaving Norerah at death's door. Mariah’s anger boils over. Ashton, her ring-mate and Linden’s half-brother, and Mariah seek vengeance, ignoring Linden’s decrees, only to discover a strange magic that threatens everything the three hold dear.

Linden, the Lord High Commander of the Marches, strode across the main healing hall of the southern district, where Mariah was helping that day. One of the healers had had a family emergency, and the lead healer had called Mariah to replace him. She now stood by the door leading into the private consulting rooms, feeling the heat of his anger. The veins bulged in Linden’s neck as his face reddened when he saw her standing by the interior door. Mariah unhooked her thumbs from her honor belt and crossed her arms over her chest, ready to withstand his tirade, though she did not know what had angered him this time.

Halting in the middle of the room, Linden’s growled words boomed through the waiting room. “Stop interfering in my business, woman.”

The ruler’s head lowered as if he were a bull readying for the change. The people, waiting to consult with the healers, shrank away though both combatants were unarmed except for their boot knives used mostly for eating.

Mariah’s dark eyes blazed. Though she no longer wore her sword and seldom visited his ranger camp, Mariah still dressed in warrior's breeches, unlaced shirt, and knee-high boots, much as he did. Only her honor belt differed, displaying healer's insignia on its interlocking buckles, though the belt itself was embossed with as many death stars as his.

Biting her lip, Mariah longed for Linden’s younger version. The angry, stocky man had swallowed the slim, hesitant youth, who had once shared her bed with his half-brother long years ago. Linden pushed forward until his large nose almost touched hers, bringing his sharp elven teeth close enough to bite. The heat of his anger brushed against her tan skin. Mariah tensed, ready to defend all in the room.

The air in the public area crackled as elven shields snapped into place.

The common Half-Elven patients and their families cowered against the walls. The audience’s eyes rolled like nervous horses, fearing what powers the combatants might unleash. Mariah's skin itched from the static raised as the watchers pulled what energy they could from the air to strengthen their protective shields. But she focused her attention on the ruler who had once been one of her closest friends.

Long time fantasy reader and non-fiction writer, M. K. Theodoratus now writes about elves, mages, demons, and other preternatural creatures. While she mostly writes to amuse herself, she's willing to share her stories.

Hey, thanks for giving my novella a shoutout.

I'm most intrigued by the title!

I guess I'm intrigued because I've not read anything like this before :)

I like the book cover, as well as, the excerpt.

I'm intrigued by the historical fiction aspect and the vengeance! This seems like a really good book! I loved the excerpt!

I am most intrigued by the exciting storyline and the interesting characters. Looking forward to reading this book!

I'm intrigued by the woman's viewpoint on the revenge story.