Dispatched ahead in preparation for the Alpha pair’s trip to Willow Bend, he has no problem entertaining the sexy wolf he encounters in the airport. The last thing the playboy wolf expects, however, is to find in Murphy the most captivating chase of his life… 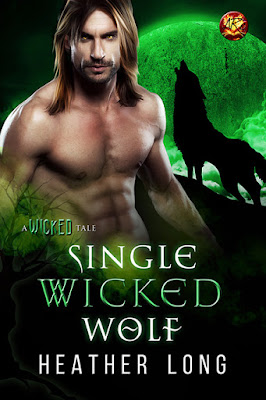 He’s single, wicked, and a perfect pretend boyfriend…but exactly who is she fooling?

Murphy DeWitt enjoyed two years touring American consulates in Europe as an assistant to a diplomatic attaché. It was a dream come true, and a hell of a learning experience. A master of languages, she knows how to get her point across. Romance, however, proves to be a tongue twister.
Now en route to Willow Bend for a friend’s wedding—without the make-believe boyfriend she created for her family—she debates how to confess her deception. Luckily, her flight includes a fantastically hot wolf that leaves her breathless and contemplating all kinds of naughty things.

Giovanni Conti thrives on protecting others. As a Centurion for the Seven Hills pack in Italy, it’s his pleasure to serve his Alpha wherever he is needed.

Dispatched ahead in preparation for the Alpha pair’s trip to Willow Bend, he has no problem entertaining the sexy wolf he encounters in the airport. The last thing the playboy wolf expects, however, is to find in Murphy the most captivating chase of his life…

“I’m in Rome, Mom,” Murphy repeated the information for the third time. The connection sucked, but she’d promised to let her family know prior to boarding the flight taking her back to the United States. After two years of hopping all over Europe, she was actually ready for a good old fashioned burger and beer with her friends. If it were warm enough, maybe they could have a picnic by the old swimming hole and catch up.

Navigating through the crowded corridors, she avoided being run over by businessmen hurrying, tourists gawking, and mothers herding. She’d already checked her suitcase, but kept her go bag with her. After visiting more than sixty U.S. missions and consulates throughout Europe, she was heading home to Willow Bend. The roaming had been fantastic for her, a dream come true. The idea of returning home—returning to her pack—made her wolf heart sing.

“Rome,” she said again when her mother’s voice crackled.

“I thought your last assignment was in Zurich.” Switzerland was an appropriate place to finish her European tour. Serving as a translator for an assistant attaché may have landed her in boring meeting after boring meeting, but it had also taken her to a wide variety of cities. A once in a lifetime opportunity, especially as not all packs welcomed foreigners in their territory. Thankfully, most had given her a pass for a day or two with freedom to leave the consulates or embassies. Only three times had she received a text from either her Alpha Mason or his second, A.J. advising her to stay with the detail in the host city or on the embassy grounds.

Some packs killed and asked questions later. She’d been turned when she was eighteen and at twenty-seven, she’d had nine years of being a wolf. Even after two years of limited shifting because of location and observation, she’d become more comfortable with her wolf. Still, she avoided fights—and she dodged another cluster of people. The airport made her crazy. She had to cross the entire length of it to get to her connecting flight to the U.S.

“I was, Mom,” she told her, weaving to avoid students from Japan who streamed past in organized fashion. Part of the reason she’d taken the job was when she’d asked Toman for the bite, she’d had to forgo a year of foreign studies.

Her wolf rubbed against the inside of her skin. Yes, totally worth it.

“Now I’m in Rome, I’ll be boarding my flight in fifteen and I’ll be home sometime tomorrow…and no, before you ask, don’t send anyone to pick me up. I’m going to rent a car.”

“You’re sure?” Alison DeWitt was the perfect mom. She baked cookies, attended all extracurricular functions, encouraged her and didn’t hover. But she always had to confirm everything. “The wedding is in three days, two after you get here, and I thought we could meet your young man before the wedding. It will be so crazy at the wedding.”

Crap. “I’m sure—I see my gate. I need to go. I’ll see you soon. Love you.” Ending the call before her mother could add anything else probably earned her bad daughter karma, but she didn’t want to admit the mysterious boyfriend stories she’d entertained them with on and off for the last few months were complete and utter lies. Self-defense was her only excuse. After Shiloh and Matt announced their mating, Mom began dropping huge, nuclear bomb-sized hints about marriage or mating prospects for Murphy. The first fabrication had been to get her mother off the phone, and it sort of snowballed from there.

Not one to lie to her parents, she’d come right to them at fifteen and confessed her desire to be a wolf. Her human parents were a part of the Willow Bend pack, and all of her siblings were human, too. Her aunt and uncle, and by extension her cousins, however, were wolves. Her aunt had taken the bite, and her children had been born wolves. Murphy wanted to be like them.

No one in her family tried to talk her out of it. Her stomach rumbled, so Murphy diverted into a gift shop. Bottle of water, one pre-packaged turkey sandwich, and some chips in hand, she dropped the food into her duffle bag after paying for it. Returning to the concourse, she blew out a breath. No, no one tried to talk her out of her desire to become a wolf. No one pushed her to be anything other than what she was—and her mom talked to every wolf family, including her sister, and they all took Murphy under their wings.

Eyes watering, she held her breath at the cloud of Chanel and sweat floating past her. Contrary to what most women thought, bathing in their perfume did not cover the lack of a shower. Learning to ignore her nose took practice, and the airport was a great place to remember not to suck in the scent of everyone in her path. A glance at her phone told her she had another forty minutes till her plane boarded, which was good. She would have time to eat and pee without going into the nasty little onboard bathroom.

Plan firm, she found an opening amongst the passengers hurrying along. Carry-on in hand, she heard a mother call out to her child in French. The snap in the mother’s tone jerked her attention more than the words. Homesickness swamped her all at once and tears filled her eyes. It had been so long since she’d seen her mother, save for the occasional Skype call, or been around the pack. The longing left her aching.

Distracted, she didn’t slow until she slammed into the hard bodied male and bounced off him. All the air whooshed out of her, and her chest actually hurt from the blow. If not for his hands on her arms steadying her, she would have landed on her ass. Embarrassing enough to slam into someone, worse to fall.

Goodreads ** Amazon ** AllRomance
About the author:

Heather Long likes long walks in the park, science fiction, superheroes, Marines, and men who aren’t douche bags. Her books are filled with heroes and heroines tangled in romance as hot as Texas summertime. From paranormal historical westerns to contemporary military romance, Heather might switch genres, but one thing is true in all of her stories—her characters drive the books.

When she’s not wrangling her menagerie of animals, she devotes her time to family and friends she considers family. She believes if you like your heroes so real you could lick the grit off their chest, and your heroines so likable, you’re sure you’ve been friends with women just like them, you’ll enjoy her worlds as much as she does.