18++ Princess Justine makes an unlikely ally when she storms into the stables and finds an angry, devastatingly handsome young man tending to her mare. Victor belongs to her soon-to-be Queen mother-in-law, and he has the whip marks on his muscled back to prove it. 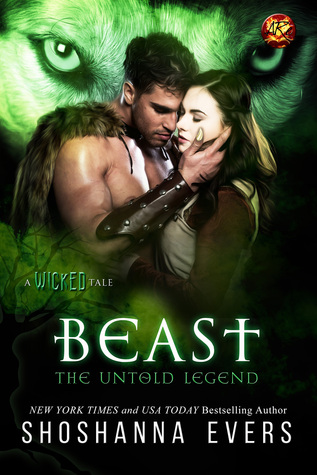 Deflowering the princess may just save her life.

Princess Justine makes an unlikely ally when she storms into the stables and finds an angry, devastatingly handsome young man tending to her mare. Victor belongs to her soon-to-be Queen mother-in-law, and he has the whip marks on his muscled back to prove it.

The Queen, an enchantress well-accomplished in the art of black magic, turns Victor into a creature like no other. He’s a ten foot tall beastly wall of muscle, animalistic sinew, and savagery ready to unleash every primal urge coiled within him. At the Queen’s command, he kidnaps Justine on her wedding day to the prince — but refuses to kill her. Instead, he keeps her safe by turning her from a threat to the Queen’s power into a ruined woman who will never ascend the throne.

Now the Beast holds his princess captive in the woods, his focus on only one mission: deflower her and get her with child before the queen comes back to kill Justine herself. But as their tentative alliance forms, both Victor and Justine can’t help but wonder— what if being together is their chance for true love?

The idea of being used by a beast like the one who held her captive now made Justine’s breath short, her pulse race. His display of strength and agility so far made it clear she’d never be able to outrun him, or fight him. Under his control, she’d been rendered completely helpless.

Being a princess would mean nothing out here, deep in the forest. Any privilege she thought she’d had was stripped away when she was alone with someone who didn’t give a damn about her title.

Just like with her handsome stable boy—Victor Gerard. Once he’d known she wasn’t going to tattle on him—and how could she, if it would only serve to get a rightfully angry, abused young man even more punishment?—he had shown her who would be in charge behind closed doors.

No one had ever dared treat her that way before. And God help her, she liked it. It aroused a feeling of fear that skated the edge of desire… to be taken in hand the way he did, touching her with impunity as if she belonged to him, holding her under his control.

Her breath quickened. What was wrong with her?

And just like with Victor, the beast had her alone to do whatever he wished.

The beast had taken her so far away from the kingdom that the guards would never find her, even if they continued to pursue them. By running down streams wherever he could, the beast had effectively covered their tracks.

Finally, after countless miles of running through the dense forest that surrounded the kingdom, the beast stopped.

He plucked her off his shoulder and set her down on the pine-needle and moss-covered ground. Her relief was quickly replaced by fear. What would he do to her now?

Her legs were so shaky from having tensed her muscles in terror the whole time he’d been absconding with her that her knees buckled, and she fell on the ground in an inglorious heap.

“Beast,” she said, trying to steady the tremble in her voice. “I have no quarrel with you, sir. Please don’t hurt me.”

To her surprise, the beast dropped down on all fours to be closer to her, and shook his massive head. A lock from his dark mane fell over his blue-gray eyes, and Justine paused. It made no sense for him to remind her of…Victor.

Maybe it was just that feeling they inspired in her that drew the comparison in her mind. That feeling she got when she stood on the edge of a cliff and stared down, and wondered what it would feel like to jump if only she had wings to keep her from crashing. Staring at the beast now, he felt like both the cliff…and the wings.

“I had no choice but to take you, princess,” he said, his voice gravelly and deep. “Do not run from me.”

The cadence of his low voice sounded familiar, but that didn’t make sense.

“You’re not real,” Justine said. “I fainted at my wedding and hit my head; I’m sure of it.”

The beast loomed over her, covering her with his body, so there would be no escape. “I am real.”

No. This wasn’t real. “You are a figment of my imagination. There is no beast like you in nature.”

His face was millimeters from her own. He pressed his cheek to hers, his rough whiskers prickling her own delicate skin.

Goosebumps raised along her arms. If it were a dream, would she be feeling that?

“I am real,” he growled. “But you are right about one thing, princess. I am not natural.”

“Please wake up,” she shouted, hoping it would jolt her out of her nightmare.

With a dangerous smile that bared his fangs, the beast gripped her arm. “This is no dream. Shall I pinch you, and prove it?”

“Yes,” she said, with a boldness she didn’t feel. This nightmare was going on too long—

The beast raised one thick eyebrow…though the eyebrow blended in on his face, which was covered in smooth short hairs that did nothing to hide his strong jaw and high cheekbones.

He picked her up off the ground, his large hands so human if not for the claws that adorned them. Yet they weren’t paws. He definitely had fingers, holding her firmly under her buttocks.

Each one sent a line of heat through her chilled flesh.

The claws that had torn her gown earlier didn’t touch her now. Had he…retracted them? Like a cat?

With a groan that sounded too much like raw satisfaction for her sensibilities, he pinched a handful of the flesh on her bottom.

The jolt of pain made her yelp in surprise. *Pinches in a dream shouldn’t hurt.*

He dropped his mouth to her neck, his whiskers scratching her delicate skin, and nibbled her ear. It didn’t hurt, despite his sharp fangs. He wasn’t tasting her…he was toying with her.

His tongue was soft sandpaper against her fragile skin, like a cat tongue. It tickled and made her restless, unable to keep still his arms.

He pulled away from her ear to stare into her eyes. She couldn’t look away as he growled softly and pinched each handful of her ass cheeks again, holding her flesh hostage even as she squirmed against him.

This is not a dream.

“Stop!” she gasped, struggling to be free of his iron grip.

Her attempts to move her bottom away from his hands only served to press her mound against torso. [...]

He knew her name. He used her name as if he knew her.

Shoshanna is a New York native who now lives with her family and two big dogs in Northern Idaho. She welcomes emails from readers and writers, and loves to interact on Twitter and Facebook.

This book sounds great and I can't wait to read it.ty

Thank you for the giveaway, sounds like an amazing read

This book sounds awesome! Thanks for the giveaway.

I can't wait to read this story. I like the gorgeous book cover.

This sounds like a thrilling story. I love the title.

Wow, interesting excerpt. Love the cover too. Sounds like a hot story :)

Thank you so much! And thank you for hosting me! xoxo

Love the excerpt =) can´t wait for my chance to read more!
Thanks for the giveaway & Happy Monday!
//Linda

I love reading books in all genres and look forward to reading yours as well.

Can't wait to read this book!

Oh gosh, I absolutely HAVE to read this book! Sounds amazing, my type definitely!!