They need his blood - Phoenix Awakens by Eliza Nolan

Julia Long is starting her senior year with an extra dose of crazy. The dreams of cultish, bloody rituals are weird enough, but the victim in her lifelike dreams is her new classmate, Southern charmer Graham. 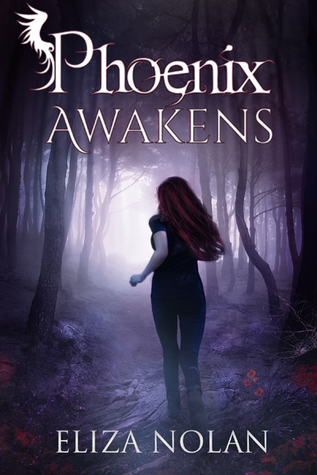 Paranormal debut about a high school senior who finds herself in a fight with a secret society for control of ancient magic.

Julia Long is starting her senior year with an extra dose of crazy. The dreams of cultish, bloody rituals are weird enough, but the victim in her lifelike dreams is her new classmate, Southern charmer Graham.

Graham admits he was part of the Phoenixes — a centuries old secret society — but swears he left it all behind. As Julia works with Graham to figure out why she is dreaming about his past, she's discovering she has other abilities. She heals Graham’s migraines with a touch, and there’s her superhuman strength that comes and goes. Julia doesn’t know where her new talents come from, but there’s no denying that when Graham is near, her powers kick into overdrive.

But the Phoenixes want Graham back. They need his blood to awaken the magic they seek, and they'll do whatever it takes to get it.

In a mundane world where magic does not exist, Julia is the only one with a shot at stopping them. Will Julia learn to control her new abilities in time to stop the Phoenixes from harnessing this powerful magic?

I rush down the wooded path as fast as I can. My legs throb and my lungs burn as I push forward through the night.

I should be heading in the other direction, away from danger, but my survival instinct is overpowered by an even deeper need. A need so primal I can't name it; I only feel its pull and have to obey.

A man's yell cuts through the forest. I race even faster towards the bloodcurdling sound.

But when I get there, it's too late. I hide behind a tree at the edge of the clearing.

Light from a bonfire illuminates a group of men in hooded cloaks. At their feet kneels a teenage boy. He's wearing jeans and nothing else. Blood drips down his chest from fresh cuts. One of the men stands over him, a bloody knife in his hand. The boy wavers on his knees and collapses to the ground. The others move away, leaving him where he lies, motionless.

The shuffle of their feet fades as they head towards the swamp.

The only sound left is the racing thump, thump of my heart, so loud I'm sure all the creatures in the forest can hear. I tiptoe out into the clearing and, seeing no one else, rush over to the guy. Still breathing, he is curled up in a ball on the ground. His body is covered in a mixture of dirt and his own blood. So much blood!

"Hey." My voice comes out in an unsteady whisper. "Are you okay?"

He turns to face me and I startle when I recognize him.

My hands shake as I reach out to him. I brush his shoulder with my fingertips and sharp pain shoots through them and up my arm. It's like a million pin pricks at once.

I jerk my hand away, crying out.

Eliza Nolan was born and raised in Minneapolis, Minnesota. She lived in Charleston, South Carolina, for a few years, after which she returned to icy Minnesota - where she now lives with her two cats in a house smaller than your closet.

She is an avid reader and writer of YA. She has ghostwritten a novel or two, but also writes her own stuff, and is FINALLY getting ready (to get ready) to publish her debut young adult urban fantasy novel, Phoenix Awakens.

Very intense except! Definitely makes me want to read more. Thanks for sharing! !

Very intense except! Definitely makes me want to read more. Thanks for sharing! !

Sounds intriguing and entertaining, will have to read soon. Thanks for the giveaway.

I love stories about magic powers :) Thank you for the giveaway!

I look forward to reading your books and keeping up with your work.

Oh definitely my type of book! I've actually been wanting to read this one for a while now!

Great post! I really enjoyed reading the excerpt and learning more about this book! Looking forward to reading this book!

exciting read!!! Would love to read this :)