"The Reapers brings together, skillfully intertwined: action, suspense, a wide range of feelings, doubts, the journey of a self discovery, the uncertainty of the existence of the Underworld, the reward or penalty, enabling the reader not only to read a beautiful story, but also to seek answers about himself and what it is, if it is, AFTER." - Mythical Books 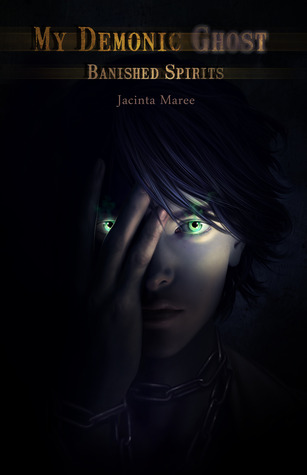 Rachael has traveled to Whitehaven to visit her father, a trek she can not help but dread given his recent descent into madness. Upon her arrival she realizes his deterioration has not only been mental, it’s been physical as well. His death comes as no surprise, but what she discovers soon after, is shocking when his burden becomes hers.

Lock is a banished spirit who must attach himself to a human host in order to hide from those who would drag him back to hell to be destroyed. When he meets Rachael he finds more than a host, he finds an ally.

Together they must defeat each of the seven sins in order to guarantee Lock's safe passage into the Third Realm, a loophole in creation that would allow him to escape hell and have peace at long last. Through their unlikely friendship, other banished spirits flock to them in hopes of a peace they hadn't dreamt possible.

The day you die is meant to be the end, but for 18 year old Jordon Hastings, his death was only the beginning.

In a dark and twisted world, lost spirits known as Reapers remain behind after death to help collect the spirits from the realm of the living. A new Reaper, Jordon struggles to accept his fate and lingers in the shadows of his mortal life. But when a demon wolf starts to live through his shadow, hunting his family and friends Jordon has no choice but to leave. As soon as he accepts his new role the truth behind the relationship between Reapers and Angelic Hunters is revealed. His loyalty is tested, making him choose between a corrupted God and a single Banished Spirit.

It’s been five years since the phenomenon that shook the world’s belief in the supernatural. It has become a worldwide obsession as crowds flock together in hopes of catching a glimpse of the spirits. That is most… except Rachael Hastings.

Rachael, now at University, lives with a giant blank page in her memory from when she was fifteen years old. Plagued by nightmares of a green-eyed monster, Rachael tries to stay as far away from the paranormal as humanly possible. Despite her efforts, he stalks her through the shadows and appears in her dreams for reasons she can’t understand.

Along with friends from school, Rachael returns to Whitehaven. During her stay she is caught up in the ongoing war between heaven and hell she had unknowingly escaped from years ago.

Forced into the care of Gargoyle the Hunter, Rachael attempts to piece together her shattered memory. As emotions grow between them, a familiar green-eyed demon returns to her side, claiming that Rachael is his one true love. With the world falling apart around them, can Rachael remember who she loves and which side is right before it’s too late?
EXCERPT

He leaned forward, closing the distance. He didn’t make a sound, though my heart was pounding hard and loud enough for the both of us. His hand outstretched, soft cold fingers ready to take a hold of my cheek, to touch me, keep me still, as he finished his kiss. The distance between us vanished. He wasn’t a spirit; I wasn’t human. He didn’t act fourteen, and I didn’t look fifteen. We were just beings falling hopelessly in love with each other, everything was perfect. But his fingers fell through my skin, and in an agonised surprise Evan’s smile instantly dropped. Oh, but there is still a difference… My smile was sad for just a moment.

With two hands he leaned in and made another attempt to cup my face. A dark spiral, soft and thin like a broken cloud, looped around us. Evan started to change colour swiftly and I instantly threw my hand up to stop him.

“I know I was the one who forced you into doing the Forbidden Act and turning yourself into a human, but you’re stronger as a ghost so I don’t…”

He continued to lean in, slowly, just as the smoke engulfed the attic. His fingers tingled at the touch of me; his body filling out into solid build as his lips, still ghostly, planted onto mine and pressed in with his gradual transformation. The smoke faded and he held me in my spot. The waft of lemongrass stung my mouth, the air blooming with the scent of wood and pine. Fingers shuffled to entangle themselves with my hair. His touch controlled me. He titled his head and took a hold of my lower lip, drawing it in.

The wind of his breath sat on the nape of my neck, his head craning in, lingering his warm mouth at the tip of my ears. “Promise to never forget me?” 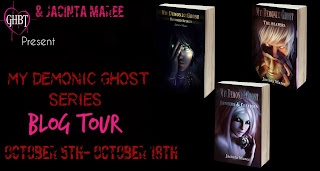 Self confessed chocaholic, Jacinta was born and raised in Melbourne Australia with her loving family of five. Even as a child Jacinta had an itch to write. Writing was the one constant hobby she clung to, also trying her hand at piano, flute, tennis, horseback riding and drama.

Jacinta works full time in the family business and spends her afternoons either playing basketball, reading, writing or hanging out with friends. She is always happy to try something new; getting her real estate license, practicing ninjitshu, Zumba and parkour to name a few.

For her future, Jacinta sees herself writing. It is a large part of her identity and something she hopes to continue. Aside from her love of stories she loves Japan and its unique and beautiful culture and history. From their delicious sushi dishes right down to their wooden sandals and kimonos. She is also a huge cat person and loves to snuggle up in front of the fire for a good movie or book. Her favorite genres are paranormal and fantasy but she also loves anything written by thriller writer, Stephen King.