Something wicked this way comes...Season Of The Witch (Shades Below #1.5) by Laura Oliva

Georgia Clare needs help, and fast. As the lone survivor of—and witness to—her coven's brutal massacre, she's felt the killer hunting her. There's just one problem: the rest of San Francisco's witching community wants nothing to do with her, and the one man she can turn to doesn't do witches. 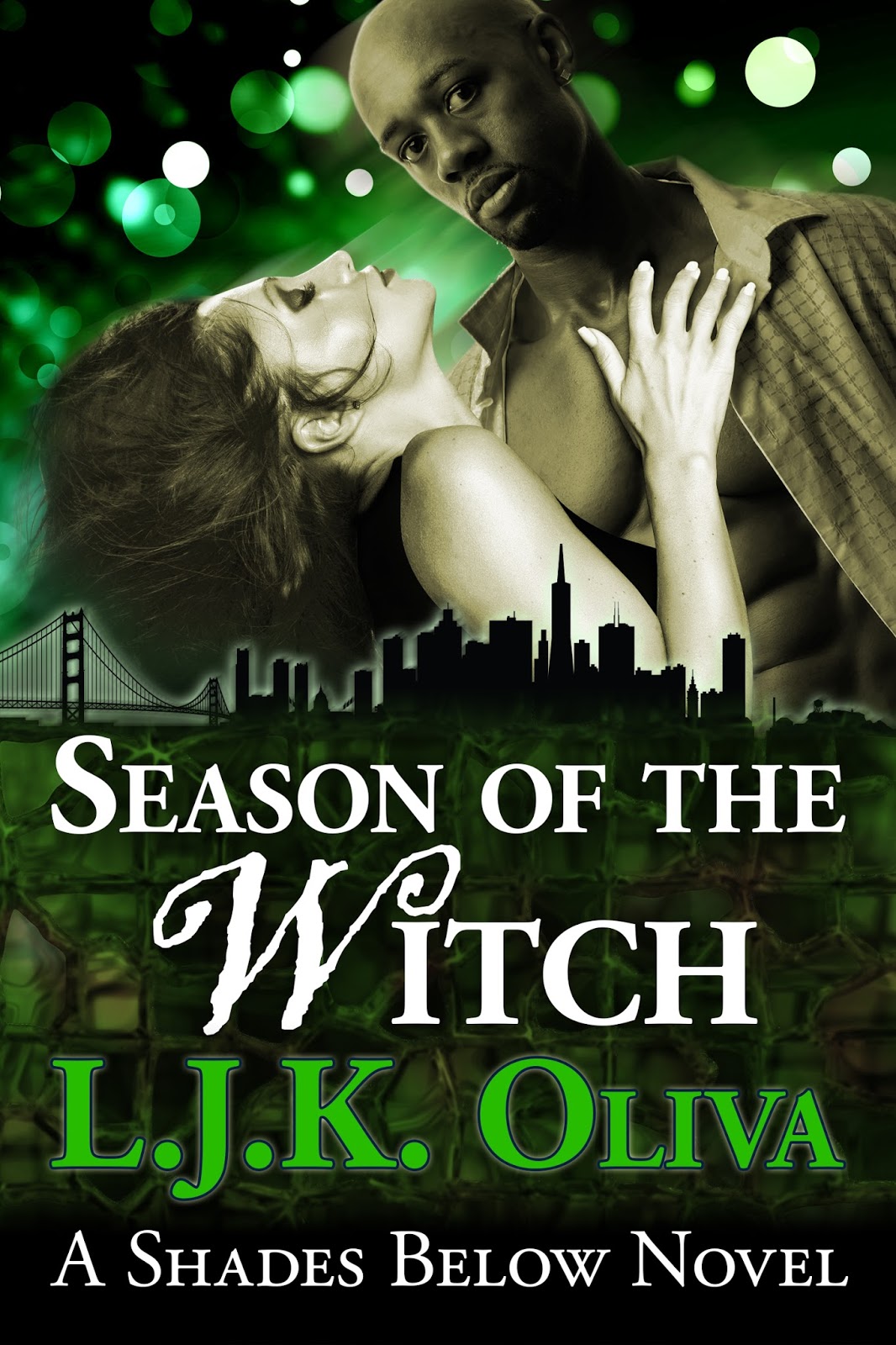 Something wicked this way comes...well, more wicked than usual.

Georgia Clare needs help, and fast. As the lone survivor of—and witness to—her coven's brutal massacre, she's felt the killer hunting her. There's just one problem: the rest of San Francisco's witching community wants nothing to do with her, and the one man she can turn to doesn't do witches.

Darius deCompostela has done his best to steer clear of subversive affairs. A private investigator and reluctant medium, the last thing he wants is to advertise his existence to the things that go bump in the night. But then Georgia knocks on his door, and try as he might, he can't turn her away.

It's just one case, after all. It's not like it's going to change his life…

When I received the suggested topic for this blog post, I couldn't help but laugh a little bit. The exact phrasing was: Intermediary stories (why 1.5 and not a "next" volume).

I laughed because I've been anticipating this question ever since I began writing Book 1 of my Shades Below series. In case you're new to the series, Shades Below has, well, a unique structure. There are what I consider the main books (Books 1,2,3, etc.), and there are the "intermediary stories" (Books 1.5, 2.5, 3.5, etc.).

What the hell, right?

I'll be the first to admit, the whole concept of "intermediary stories" is a little strange. That said, there are actual reasons I decided to structure the series this way. I'm delighted for a chance to explain!

I didn’t initially plan on writing intermediary stories. When I first came up with the concept for Shades Below, the structure was very linear. I planned on a grand plot arc that unfolded over the course of the series, one that followed the same two main characters. That didn’t leave room for any deviation.

At first, I was fine with that.

But then I began actually plotting out the series, and secondary players started to introduce themselves. I realized there was a badass biker witch, a private detective/reluctant medium, a gay wolf shifter, a vampire who survived a concentration camp, and another who fought in the American Civil War, in World War I, and in World War II.

None of these characters felt purely "secondary". In fact, they started getting pretty loud. Before long, they wouldn’t stop talking about their lives, their struggles, their interests and jobs and… and…

…And so I finally decided I needed a way to tell their stories, too.

The intermediary stories are just that: the stories of some of the louder secondary characters. But that’s not all they are. They are also companion novels. In telling some of these other stories, the main story of SB is also enhanced and fleshed-out. In order for this to be possible, the intermediary books had to be written in between the "main" books of the series.

Hopefully, the end result won’t be too confusing! I hope you'll check out the series, and see for yourself whether or not this structure works out.

Just in case you do find yourself having trouble, I have a Reading Order on my website. ;-)


She pushed through the glamour surrounding the exit, and shoved the door open. Next thing she knew, she was in a narrow alley. She allowed the door to slam shut behind her. It immediately vanished into the aged brick wall.

Georgia sank against the side of the building. She bent forward and rested her hands on her knees. Fuck, was she stupid. What the hell had convinced her waltzing into a floating club was a good idea? She knew her history. She knew what people thought of her.

She should have known better.

Something that sounded suspiciously like a door opening echoed through the alley. Georgia hastily straightened and swiped her hands over her eyes. A second later, Darius was standing next to her. His eyes looked glazed, his face heavy. He shook himself hard.

Georgia pressed her lips together and turned.

Georgia ignored the twinge in her chest. "Forget it."

A hand closed around her arm. Georgia yanked free. Darius caught her again, this time spun her around to face him. She hadn't expected him to shake off the glamour so fast. Unbalanced, she stumbled headlong into his solid chest. He stiffened, then his arms closed around her.

Her vision blurred. She'd always known the witching world didn't want her. Even so, she'd always maintained a tiny flicker of hope that maybe, someday, she might carve out a place for herself.

It was stupid. Hell, she didn't even like most of the people in there. She certainly didn't understand them, any more than they understood her. The entire time she'd lived in the city, there was only one witch who had ever tried to connect with her. Only one witch who had given her a chance.

Just her luck, that witch had gone and gotten herself murdered.

Georgia squeezed her eyes shut. No good. All she saw was the same grotesque still life that had been haunting her all week. Study In Carnage. She tried to breathe. Thick metallic sweetness hit her tongue.

She didn't realize she was shaking until she felt Darius' hand slide down her back. A low sound rumbled in his chest. The echoes of it reverberated deep inside her, in a place words couldn't reach.

It took her a moment to realize he was shaking too; tight, controlled shivers she would have missed if they'd been farther apart. Georgia's head reeled. She didn't get this man. One minute he all but threw her to the wolves, the next...what? He felt her pain?

She hesitated, then awkwardly laid her cheek against his chest.

She lost track of how long they stood like that. Gradually, she became aware of other things. Of his large, impossibly gentle hand. Of the cool, subtle slide of his suit jacket beneath her palm. The fabric smelled expensive, but she kept catching a whiff of something else, too; something richly organic. She'd never smelled anything quite like it. She furrowed her forehead. Then it struck her.

It was him. Darius deCompostela, distilled down to the essence. Georgia closed her eyes. The tightness in her chest eased.

Several more minutes passed before she opened her eyes again and stepped back. It took several more before her head was settled enough to think. At last, she forced herself to look up. "You really don't want me around, do you?"

She tried again, her voice stronger. "Why? And don't try to feed me that Joe-Pesci-Lethal-Weapon line again. I'm a big girl. I can smell bullshit like that a mile away." Something occurred to her. "It's because I'm a witch, isn't it?"

His dark eyes were impossible to read. "This is your world, Ms. Clare, not mine. But as long as I'm working this case, let me be clear: we're not partners. I don't work with people like you."

She tried to be angry, but couldn't quite manage it. "I won't forget that."

Georgia swallowed hard. She turned and started down the alley again.

This time, Darius didn't try to stop her.

Goodreads ** Amazon
About the author:
L.J.K. Oliva is the devil-may-care alter-ego of noir romance novelist Laura Oliva. She likes her whiskey strong, her chocolate dark, and her steak bloody. L.J.K. likes monsters… and knows the darkest ones don’t live in closets.

Hey guys! Thanks so much for having me back on your blog. Have a wonderful week!