Life is getting strange - The Devil's Hook by Pearl R. Meaker

Life is getting strange in Twombly, Illinois.
Jairus Twombly's familial intuition is faltering and his new personal assistant seems to be trying to replace his wife, Amy. 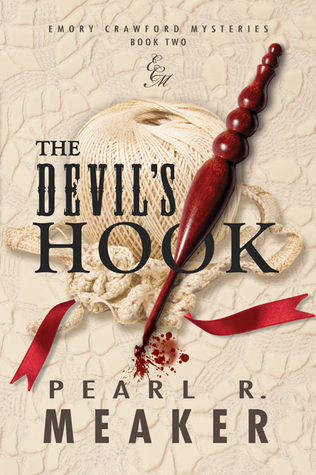 Life is getting strange in Twombly, Illinois.

Jairus Twombly's familial intuition is faltering and his new personal assistant seems to be trying to replace his wife, Amy.

On the Twombly College campus, someone is breaking into the dorm rooms of female students leaving things instead of taking things: red colored objects including a red golf ball, a red ribbon and a tiny red stuffed dog.

When a recipient of some of the red objects goes missing and is returned after being told, "You're not her", and the personal assistant turns up dead with Amy Twombly's elegant Bloodwood crochet hook in her eye, things heat up for Emory Crawford and her chemist and forensic scientist husband, Dr. Jebbin Crawford.

Emory, along with the Twombly's Nancy Drew-like daughter, Madison, once more turns to her amateur detective skills and intuition to solve the mysteries.

1. What are the features of the “cozy mystery” subgenre and how The Devil’s Hook integrates in it?
Primarily, cozy mysteries have an amateur sleuth who usually has some connection through a friend, relative or spouse to law enforcement that helps them obtain information. The setting is usually in a small town or a small area within a larger city. Also cozies do not have “onstage” violence and gore or detailed descriptions of sex. That said some of this is changing. There is sometimes more description of the effects of the murders – what the crime scene looks like when the body is found and the condition of the body – than there used to be, although the readers still don’t witness the crime itself, and sometimes more description of sexual foreplay in some of todays mysteries that are still placed in the cozy genre. Like everything else in life, things fluctuate and change.

The Devil’s Hook, and my first book The Devi’s Music, feature Emory Crawford, a middle-aged homemaker and wife of a college chemistry professor who finds herself unexpectedly involved in murder cases. Her husband, Dr. Jebbin Crawford, also is a forensic chemist and he provides her connection to law enforcement.

The books are set in the smallish town of Twombly located in rural central Illinois. Jebbin teaches at Twombly College.

I’m “old school” with my cozy mysteries in that I prefer to stay away from overt violence, gory descriptions of the body and murder scene, or detailed descriptions of sexual activity. There is also very little swearing in my stories.

2. Even the description of your first volume- The Devil’s Music – refers to Miss Marple. In what resides Emory’s originality?
My writing coach, who was my novel writing instructor at the time, was the one who first brought up a connection between Emory and Miss Jane Marple. After reading summaries of the stories that have become The Devil’s Music and The Devil’s Hook, she said she could see “a new and engaging homemaker Miss Marple.” Like Jane Marple, Emory Crawford is witty, observant, curious, a little nosey and a person other people find easy to talk to. Both also have a bit of intuition about people they meet.

Emory is different in that she is much younger than Miss Marple. Emory is in her late forties, Jane was in her late sixties and older throughout the Miss Marple series. Emory is married and has grown children whereas Jane was a spinster. She is more attuned to the academic world having spent most of her adult life connected to colleges and universities as Jebbin finished his schooling and then became a professor. Her intuition is a touch more paranormal than Miss Marple’s. Emory is involved in many different types of crafts, not just knitting, and she even took a fencing class at Twombly College – something I can’t imagine Jane Marple doing.

Even more so in mystery stories.

I will give hints about something that Emory, or her helpers, find out to let the readers think it’s important – but they never know for sure, it might be nothing at all. And that’s the fun of figuring out mysteries. I leave clues that are real mixed with clues that are fake “red herrings” to keep my readers guessing.

The words spoken to the first kidnapping victim in The Devil’s Hook – “You’re not her” are a prime example of this. It gets the readers wondering “She’s not who?” They wonder if they missed something, maybe even go back and re-read a bit, but no. They will have to read on to find out who the girl isn’t and why it is important to the kidnapper.

I don’t really give very many clues to who did the murder in The Devil’s Hook for a reason. I want to have them feeling what Emory is feeling, frustration over how Captain Henry Schneider is behaving. They think they know who did it – but do they? They have to read on to see if it’s the obvious person or not. And yes, in some mystery stories, that first obvious suspect does end up being the criminal. So the reader can never be totally sure.

It is a long series of clues and fake clues. Facts and things made to look like facts that keep the reader wondering – and turning the page.

4. How important is the research for a mystery novel and what is the best balance between “reality” and fiction in such a story? (How much real information should contain and how the information should be used?)
I feel research is very important. Part of Agatha Christie’s initial success came from the fact that she understood poisons. She had worked during World War I as a pharmacist’s assistant and understood how the various drugs – and poisons – worked. Because of that she used them accurately in her stories. It gave her stories a reality that even people who knew nothing about it could sense was genuine.

I did a lot of research for both of my books and, of course, used only a small percentage of what I gleaned. But the studying gave a richer feel to the parts I did use. I even contacted D.P. Lyle, MD, a doctor who has made a career of being an advisor on such matters to writers of books, TV shows and movies, for advice about the particular crochet hook seen on the cover of The Devil’s Hook being used as the murder weapon.

But, cozy mysteries don’t require the level of research that forensic and police procedural mysteries need. Cozy readers aren’t reading the stories for intense, intricate scientific details as much as they are for the characters and overall story. Still, it is good to have what facts you use be correct.

5. I tried to find out something about you, but the information was hard to find. Please, tell us something you want your readers to know about you.
I’m a rather normal, everyday sort of person. I have a husband and two grown children. Like Emory, I’ve been a wife, mom, and homemaker most of my life and thoroughly enjoyed it. It was the only career I’ve had until I decided to follow the advice of some friends and set out to become a published author in 2008 at age 54.

What I’ll pass along is don’t give up. I never thought I’d have a career doing anything – but then writing came along. Friends and people who only knew me through my stories said I was good so I went for it and didn’t give up even when things got tough or I felt I had nothing to offer. Don’t let your age stop you if you’re not young anymore. Try not to let other problems stop you if you can work with or around them at all. I struggle with ADHD and depression, I know authors who battle other mental and emotional problems, or physical issues, but they hang in there and write. If you find what fits you, and you enjoy it, then don’t give up. You never know how well you may do.

Pearl R. Meaker is an upper-middle-aged, short, pudgy homemaker, mother, and grandmother who in 2002 became a writer. Initially writing fanfiction she soon tried original fiction at the encouragement of her regular readers. She has been a life-long lover of mystery stories and automatically went to that genre for her first book, The Devil’s Music. She and her husband of nearly 40 years live in central Illinois. They both love bluegrass music, playing fiddle and banjo and singing. Pearl also does many crafts – when she’s not reading or writing - knitting, crochet, origami, needlepoint, and cross-stitch among them. She also enjoys birding and photography and is a former fencer.

Thank you so much for hosting The Devil's Hook and me today. :-)

Stephanie, Thank you so much :-) I hope you'll give it a try.

Great post - I enjoyed reading the interview. Thanks for sharing :)

I live in IL and have lived here all my life. Where is Twombly, IL? Just curious to see if I live close to it because I do live in a college town in IL, lol :)

Great advice. I always told my daughters to never give up, and they, too, are following their dreams.

Hmmm...definitely interesting! I want to read it! I'm looking around for red things now....

Enjoyed the interview! Thanks!

Great interview, thank you for the giveaway!

I enjoyed reading the interview. Thank you for the post and the giveaway!

I've added the series to my book wishlist, and I can't wait to read the stories.

I like the cover and description of the book. I hope that it is a big success!