They were wrong - Tutankhamen Speaks by Cheryl Carpinello

2014 EVVY Merit Award for Historical Fiction from CIPA (Colorado Independent Publishers Assoc.)
Long ago the old texts of ancient Egypt alluded to scrolls in which King Tut spoke to the people from beyond the tomb. 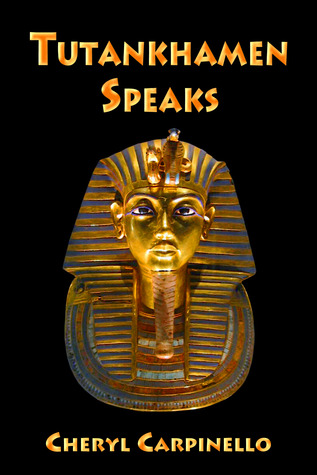 Cover Artist: Rita Toews
The Quest Books Companion to Sons of the Sphinx

Long ago the old texts of ancient Egypt alluded to scrolls in which King Tut spoke to the people from beyond the tomb.
Many archeologists put this down to an incorrect translation of the ancient Egyptian texts. Others swore to the accuracy of the translation.
None of that mattered because the scrolls in question could not be found. Scholars labeled it a hoax, something that never existed. It was ludicrous to imagine someone speaking from the grave. They were wrong on both accounts.

I looked questioningly at my father. Noticing me, he nodded his head in the direction the creature had gone. Then he did a strange thing. He held out his hand to me.

I can’t remember another time that he’d ever exhibited such affection toward me. Usually he reserved that for my half-sisters. Ankhesenpaaten squeezed my arm and gave me a push in Father’s direction.

A grin spread across my entire face. I might have even skipped to him. I know my heart was skipping.

Placing my tiny hand in his, his strong but delicate fingers wrapped around mine. A smile even touched his lips as he gently tugged on my arm.

Hand-in-hand we walked out of the palace and into the pleasant Egyptian winter sunlight in full view of all his subjects, who had also heard the deafening noise and had gathered to view the strange animal. Ankhesenpaaten followed at Father’s heels, not attempting to hide the smile on her face.

This day was the day that my father the Pharaoh Akhenaten acknowledged me as his rightful heir to the throne of Egypt. Me, Tutankhaten. However, this is not the main reason I remember this day.
*********

Some afternoons when the palace guards relaxed their vigil and most of the people napped out of the heat, Ankhesenpaaten and I would climb the stairs up to the windows.

Looking out, we could see over the tops of buildings far to the East where the Aten appeared each morning.

“Where would you go, Ankhesenpaaten, if you could leave Egypt?” I asked one afternoon.

Her eyes sparkled, and her smile widened. I watched as she rested her chin on her arms, her eyes drawn beyond the eastern horizon.

“I would travel beyond the beginnings of our land,” she said.

I looked at her questioningly.

“In the women’s quarters, one hears stories,” she explains. “A few of the women are from there. The tales they have told are wonderful!” She turned to me then. “Imagine Tutankhaten, pools of sparkling water surrounded by lush, green bushes and trees, flowers of pink, orange, white, and even black!”

“How is that different from here?” I asked.

“Here it is only along the Nile where the bushes, reeds, and flowers grow. There in the land they call Persia exists a city where gardens hang from cliffs and mountain sides! I would love to see such a sight.”

A few years later, I remembered her wish. After we were married, I had a section of our palace in Thebes reconstructed to resemble those hanging gardens that she so wished to see. Had we been given more time, I would have ventured outside of Egypt’s borders and taken Ankhesenpaaten to the gardens in person.


Goodreads ** Shelfari ** Smashwords ** Amazon ** Barnes&Noble ** iTunes
About the author:
I am a retired high school English teacher. A devourer of books growing up, my profession introduced me to writings and authors from times long past. Through my studies and teaching, I fell in love with the Ancient and Medieval Worlds. Now, I hope to inspire young readers and those Young-at-Heart to read more through my Quest Books set in these worlds.

I love books about Egypt. I haven't read this. Thanks.