Will her fear dictate her actions? - Accepted by Coleen Lahr 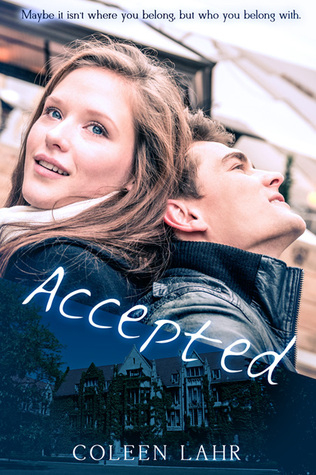 Ashley Smith spent her life being shipped from one family member to the next. When Ashley’s estranged father dies, she finally has the money to go to college and the chance to find a place where she belongs.

Within days, Ashley has found the one thing she’s always longed for – a family. She may have even found love. There’s only one problem. Ashley likes Colin…a lot, but so does Randi, and everyone likes Randi. Randi’s approval is the single easiest way to belong. Falling in love with Randi’s crush is the single easiest way to find oneself on the outside for the next three years.

When Ashley arrived at college, she never dreamed she’d find this kind of happiness. Will she allow herself to hold on to this happiness, and Colin, or will her fear of losing her friends, the only friends she’s ever known, dictate her actions?


After lunch, Colin finally decided he was tired and went to his room to take a nap. I tried to get some sleep too, but found I wasn’t able to. Instead, I laid around my room, reading, and enjoying the quiet.
Around seven that evening, Colin came to my room to see what I was doing and if I wanted dinner.
“I’m not really hungry. I’m actually still full from lunch.”
“Okay. I think I’m going to heat up some of our leftovers from yesterday and then watch a movie. You in?”
The events of the past two days were beginning to catch up with me, and I was starting to feel a little loopy from lack of sleep. Laying down in front of a television to watch a movie did not sound like a bad idea at all.
“I’m definitely in. I’m just going to get changed real quick. I’m freezing.”
Our dorm seemed to get progressively colder as the weekend wore on. I wasn’t sure if there was a problem, or the school was just trying to save money while most of the students were away, but it was starting to get really cold.
I put on my warmest, comfiest sweats, grabbed my comforter and headed to the lounge to meet Colin.
“What are we watching?” I asked when I got there. He was sitting at a table eating what looked like turkey and mashed potato sandwiches on the dinner rolls I made.
“I haven’t quite figured that out yet. Any suggestions?”
I walked over to the cabinet that housed the dorm’s meager collection of movies. “I probably haven’t seen any of them, so it’s really up to you.”
Colin put his sandwich down and walked to where I was standing.
“What are you in the mood for — funny or scary?”
I looked up at him. “Never scary.”
He laughed. “Funny it is.” He plucked a movie from the shelf and put it in the DVD player.
I sat on the sofa, waiting for Colin as he finished his meal and cleaned up. He turned off the lights in the room before coming over to sit beside me.
“Good call with the comforter. It’s freezing,” he said as he sat down.
“Here.” I offered him part of the blanket. “We can share.”
He moved closer on the sofa, covering his legs, and we settled in to watch the movie.
I’m not actually sure how or when it happened, but sometime during the movie, Colin and I shifted. No longer were we sitting next to each other with space between us. Instead, we were wrapped together in my comforter, my head on his chest and his arms around me, tucked into his side.
I didn’t want to move. I was afraid even to breathe, fearing if I moved at all, he’d move and somehow I wouldn’t be here anymore with his arms wrapped around me.
I had planned on going to bed early that night, but not quite like this. Before I knew it, I felt myself dozing off in Colin’s arms. I was so warm and comfortable, and as I was nodding off, it registered in my brain where I was, and I thought there really was nothing better than falling asleep in Colin’s arms.
And I realized, just a short time later, that I was wrong. There was one thing better than falling asleep in Colin’s arms and that was waking up in them.
“Ashley.”
I heard a voice gently say my name, and when I opened my eyes, they were looking directly into Colin’s.
I blinked up at him, still unwilling to move.
“It’s getting late, Ash. Let’s get you to bed.” He gently unwrapped his arms from around me and helped me up. I was still in a fog.
Colin took my hand and walked me to my room. When we got to the door, I turned to look at him. He had such a tender look in his eyes that it left me speechless. He reached up and brushed my hair, which had become unruly, away from my face. Then, he leaned down and kissed my forehead and said quietly, “Good night.”
His gentleness took me by surprise — so much so that I just stood there, watching his retreating body as he walked back toward the lounge.


That night, I slept fitfully. Even though I’d been dozing comfortably in Colin’s arms, out of them, I was restless. When I did sleep, he was in my thoughts. He invaded more than one of my dreams that night.

When Coleen's not plotting or writing her next book, she can be found making sandwiches in her family's restaurant, running (but mostly walking) Disney marathons, reading any book she can get her hands on and playing with her adorable kid. She lives in New Jersey with her husband, daughter, two dogs and lizard.

I already want this book. It looks and sounds good. :))

I enjoyed the excerpt. I have added this book to my Amazon wishlist, and will purchase it on my next book shopping spree.

Thank you for the amazing giveaway, your excerpt is great. thanks so much

Thank you for hosting Accepted on your blog, and thank you everyone for the awesome comments! I hope you love Accepted!!!

I really enjoyed reading the excerpt! This sounds like a fun and interesting read!

Thanks for hosting. Nice cover and interesting excerpt.

best of luck with this release!