Getting out might not be so easy. - Christmas in Dogtown by Suzanne Johnson

A woman who spent years escaping her rural past learns that Dogtown, Louisiana, hides more family secrets than just the recipe for boudin blanc…..

Resa Madere’s on the verge of losing it all. The boyfriend’s gone. The job’s history. Her beloved house is on the brink of foreclosure. She’ll do anything to save it—even spend a long Christmas holiday working in St. James Parish, Louisiana, helping her uncle run the family meat business. But the community of Dogtown, which has been home for seven generations of the Madere and Caillou families, has deep roots and deeper secrets. For Resa, going home is one thing.

But yes, Virginia, there is such a thing as a sweet paranormal.

When I started writing my paranormal holiday story “Christmas in Dogtown,” I was in a hotel in New Orleans, a city in which I’d lived for many years and had been away from only two or three. I missed it. A lot. I’d also recently moved to a small city in Alabama not too far from where I grew up. I’d been born and raised in a very small town from which, at age 18, I’d fled like a scalded dog, as the locals would say, with no plans of returning.

(Southerners say stuff like “run like a scalded dog,” by the way. As a pet lover, this is nothing I’d ever do. Just sayin’.)

Like many of us who grew up in very small towns but had big dreams, my heroine Resa fled her small Louisiana community for the bright lights of New Orleans and never looked back. She had no intentions of returning to rural St. James Parish, just as for many years, I also had never thought I’d return to Alabama.

But it is paranormal, of course, so there had to be angst and drama, right? Resa learns that her family has kept a secret from her throughout her whole life—not to hurt her, but because they wanted her to be free to pursue her dreams. The people she’d worked to get away from so she could find independence and acceptance had sacrificed a lot—a whole lot, as it turns out—so that she could be who she wanted, where she wanted.

Finding out this secret forces her to re-evaluate everything she’s taken for granted since she left Dogtown the first time. It makes her think about what “home” means, what “family” means, and what kind of future she really wants for herself.

Yep, it’s a sweet paranormal. Because not all of the fanged and furred are in a war for the survival of the world, right?

Have you read other sweet paranormal romances? 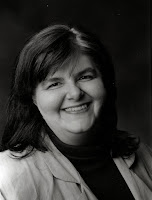 Suzanne Johnson writes urban fantasy and paranormal romance (under the name Susannah Sandlin) from Auburn, Alabama, on top of a career in educational publishing that has thus far spanned five states and six universities—including both Alabama and Auburn, which makes her bilingual.

She grew up in Winfield, Alabama, halfway between the Bear Bryant Museum and Elvis' birthplace, but was also a longtime resident of New Orleans, so she has a highly refined sense of the absurd and an ingrained love of SEC football, cheap Mardi Gras trinkets, and fried gator on a stick. She’s the author of the Sentinels of New Orleans urban fantasy series and, as Susannah Sandlin, the Penton Legacy paranormal romance series.

thanks so much for this giveaway!

Christmas in Dogtown is a fun short read. Buy it, you will like it.

hum right now i can't think of another sweet paranormal romance but i would love to find more!
Christmas in dogtown is wonderful , magical reads and not only for christmas time so if you haven't read it yet jump on teh occasion you you won't regret it!

Lynsay Sands writes funny paranormal romances - I'm not sure if I'd call them sweet or not, though.

This looks like a good read. :) Thanks for the giveaway.

I so love the cover of this book, I can actully already see my dog looking just like this in the very near future!!! She is only 8 months old and is in to everything so if you need a live model!! lol any way your book sounds great too, and thank you for the giveaway too

Christmas books are already comforting, so to add a DOG to the story? It might just be the most heart-warming thing ever published!

What am adorable cover! Seems like a sweet book.

I liked both the excerpt and the adorable book cover.

Thank you so much for this nice giveaway.

Always in mood from some Holiday Sweets if there are like your book. I liked it!