Deception, revenge, and the hunger for love and absolution - Wolfsgate by Cat Porter 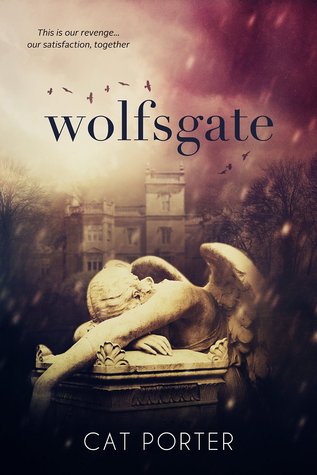 
My resurrection, they call it.

They have no bloody idea.

Shipwrecked and lost, left for dead,
Abandoned by my own family.
Drugged and addicted.

My wife saved me, brought me home.
I didn’t even know I had a wife—can I trust her?
I know I want her.
Desperately.
We are two of a kind—the manipulated, the tossed off, the rejected.

Bitter disappointments, painful secrets, age-old jealousies are my new shipwreck, and my wife my new opium.

Is satisfaction to be found in revenge or revenge in satisfaction?
One thing I do know, without each other we’re both doomed.

Wolfsgate
A sensual 18th century tale of deception, revenge, and the hunger for love and absolution.

The door slammed shut, and a moment later the coach swayed off. The air in the small compartment quickly turned hot and humid.

“Did you enjoy your card game?” Justine asked. “Were you always such an avid player? I suppose your company this evening inspired you.”

Brandon hissed in air and pulled her into his lap with one swift movement. He tugged her legs over his so that she straddled him. Her chest tightened under the fierceness of his eyes and his firm grip. That demanding touch lit a fire inside her, a fire she barely understood. He wrapped a hand around her neck and pulled her down close taking her mouth in a hungry kiss, his tongue searching for hers, lashing, inflaming her further. Her fingers gripped the thick lapels of his great coat.

His hands traveled down to her hips shoving her into position over him, and a sharp breath escaped her when she felt the pressure of his hardness right between her legs, just where she ached for him. The jostling of the coach pushed her against him roughly, and she let out a small cry as the friction between them multiplied her need. He let out a heavy breath as he slipped one hand under her dress over her bare flesh. Her body jerked in his arms, and a low cry escaped her lips as his fingers found her.

“Yes, there you are,” he breathed, his voice thick in the darkness.

He knew her body very well, and she immediately flooded with heat under his insistent touch. He buried his face in her bosom, his other hand sliding down her rear. Two of his fingers slid inside her, and she shuddered in his arms.

“You’re soaked.” He let out an expletive-filled groan.

His fingers claimed her depths as his thumb stroked over her, teasing, rubbing. Her arms clutched his neck and shoulders, her thighs tightened, and she came apart sharply in his grip, letting out a low moan.

“You liked that, eh, Lady Graven?” His smug, harsh tone struck her like an icy blast of winter air. Was that scorn, a taunt? Had he just proven a point? Her heart shrank. He had marked her like an animal in heat, showed her who was her master, proved to her to whom she belonged.

She twisted back from his chest, but his strength was too much for her. His one hand fisted tightly in her hair, and he brought their faces inches apart.

“Are you punishing me?” she asked against his lips, the back of her throat stinging. “Are you trying to teach me a lesson?”

His eyes creased. “Punishing you?”

“What the devil are you talking about?”

“I told you you’d hate me for this marriage, you’d resent me.” Her hands pushed against his shoulders. “Tonight you saw what’s been denied you, and you’re angry.” His body hardened under her, his fingers gripped her bare thigh.

“I am annoyed about Charles and Andrew,” Brandon said, his other hand releasing its tight hold on her hair. “But I don’t hate you.” His hands slid over her hips and pressed into her rear. Her breath caught in the darkness. The gentle yet carnal possessiveness of that gesture only set off a spiral of heat in her chest. “I don’t think I could ever hate you, Justine,” he whispered.


Goodreads ** Smashwords ** Amazon
About the author:
Cat Porter was born and raised in New York City, but also spent a few years in Europe and Texas along the way. As an introverted, only child, she had very big, but very secret dreams for herself. She graduated from Vassar College, was a struggling actress, an art gallery girl, special events planner, freelance writer and had all sorts of other crazy jobs all hours of the day and night to help make her dreams come true. She has two children’s books traditionally published under her maiden name. She now lives in Athens, Greece with her husband and three children, and freaks out regularly and still daydreams way too much. She is addicted to the History Channel, her iPad, her husband’s homemade red wine, really dark chocolate, and her Nespresso coffee machine. Writing keeps her somewhat sane, extremely happy, and a productive member of society.