He may just be the biggest imitator of all - The Divine One (Book #1) by Danielle R. Mani 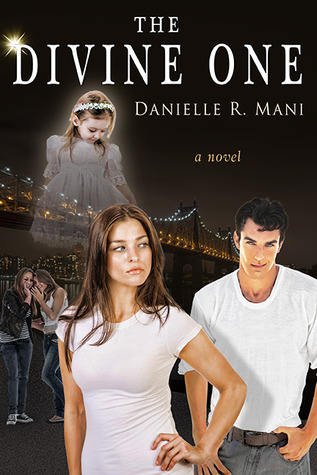 Delilah Simms is an attractive high school senior who is being bullied by a cruel group of girls she calls the Imitators. As if the emotional harassment isn’t enough, she is also trying to heal from the sudden, tragic loss of her younger sister, Darcy—whom her mother believes is sending messages from beyond the grave.

On the verge of a breakdown, Delilah meets River Spencer—a handsome young man who she’s instantly attracted to. Although River seems perfect, Delilah can’t ignore the gnawing feeling that River is hiding something and that he may just be the biggest imitator of all.

And it's a delightful read even if you haven't been through depression or bullying. It's a great read. Period. I skipped sleep and meals for this book which I think tells you more than anything else(besides the part where I cried). Get yourself a copy now!!!!!!!! - Goodreads

I can't begin to put into words how truly amazing this book is! I would recommend this to anyone junior high age on up. This is great as it does not contain sex, drugs or language but does touch on bullying, death and the effects it has on a person as well as family. Having said that it is also a love story with an amazing and shocking twist that gave me flashbacks of a great movie I will not name as I hate plot spoilers and this would give away a truly amazing part of this book. All I want to add it buy it, read it and love it!! I'm sure you will not be disappointed!! - Amazon

Although Delilah hated the way she was feeling, she knew that she wasn’t alone. She had read countless magazine articles about students who tried to take their own lives—and about some who succeeded—just because they couldn’t deal with the torment of high school any longer.

For a moment her mind shifted to her friend, Damon. Damon and Delilah met in Spanish class when they were freshmen. They spent an entire semester passing notes to each other, which was probably why she only knew about three Spanish words. Damon was openly gay, and no one at school seemed to have a problem with it. That’s why everyone was so shocked when they heard that Damon hanged himself with a belt in his bedroom closet. Unfortunately, Damon’s parents did have a problem with him being gay, but no one knew about it until it was too late.

Delilah had also gone down a bad path a few months ago. She was ashamed to think of it now. Not only was she dealing with problems at school, but she was also having her share of problems at home. She experienced a really weak moment shortly after her father moved out. Susan was going off on one of her rants about communicating with Darcy in the afterlife, and Joe just couldn’t take it anymore. Every time Delilah heard them fighting, she blamed herself. She was aware that her parents knew she was the one responsible for Darcy’s death.

“D, are you all right? You look like you’re a million miles away.” Without waiting for a response, Susan continued. “Anyway, I think it’s very commendable that you want to focus on college, but please don’t let anyone take away your special high school moments. You should be thinking about fun things like your senior prom.”

I can’t believe she even said the P word, Delilah thought. She had finally made peace with the idea of not going to her senior prom. Why did she have to bring that up? “I’ve told you a million times that I don’t want to go to prom and I don’t want to walk at graduation. I just want my diploma mailed to me.”

“D, honey, I know how you’re feeling betrayed and hurt right now, but please don’t let these girls get the better of you. You don’t want to look back when you’re old like me and have regrets.”

“I just worry about you. I want you to be happy.”

“Then just leave this alone,” Delilah said crushing the plastic cup in her hand and walking toward the garbage can.

“Are you sure that you don’t want any more pizza?” Susan said, trying to change the subject.

“Then have your doughnut. I can put on some tea and we can talk.”

The thought of touching a doughnut made Delilah feel sick. “No thanks, Mom, I just want to finish my homework, take a shower, and get to bed.”

“OK, I’ll finish cleaning up. I’ll wrap the rest of those slices in some foil so your father can—” she stopped herself. “Force of habit,” she said, looking up teary-eyed. “I keep thinking that he’s going to walk through that door.”

As Delilah walked back to her room, she thought about how her dad better come home soon. The last time she went to visit him she noticed that he was acting strangely. It reminded her of an article she read in Cosmopolitan that said when a man was cheating he might start to exhibit certain behaviors. One of the things it mentioned was that he might start worrying about his appearance more. He may buy new clothes, start wearing a new brand of cologne, or restyle his hair, which in her father’s case wasn’t necessary because he was bald. Another thing she remembered reading was that a man may start to hide things like his cell phone from his wife, in case he receives messages, texts, or misses calls from the other woman. Note to self: if Dad starts sporting a new wardrobe, wearing different cologne, or hiding his cell phone, he’s probably messing around.

Later that night, after she showered and dried her hair, Delilah thought about the mystery man she met earlier. She wondered what his name was and wished that she had someone to discuss it with. She felt so lonely. Usually Charlotte would be the first person she would call about something like this. Things were never the same between the two of them after they started high school and became friends with the Imitators. Delilah wished they had never met Rachael Nappi. She was a jealous, evil girl who would do almost anything to get her way.

Delilah began to think back to when everything started to go downhill. With a tendency to replay things over and over again in her mind—an unhealthy habit that often brought on panic attacks, she ruminated over the details of her high school drama, and came to the same conclusion that she always did. The only person she had to blame for this whole situation was herself.

Danielle R. Mani is a former elementary school teacher and writer. A huge fan of speculative fiction in print and film, she wanted her first book to fall within this category. In her new young adult novel, The Divine One, Ms. Mani combines supernatural fiction with the everyday dramas of young adulthood. She loves to read and write novels that are fast-paced and full of twists and turns. Ms. Mani holds a master of science degree in education and a bachelor of arts degree in mass communications. She resides in Westchester, New York, with her husband, four young children, and two dogs.