Get more than they bargained for - What Rough Beast by H.R. Knight 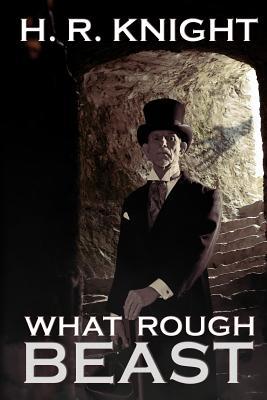 Harry Houdini asks Sir Arthur Conan Doyle to help him expose Maximillian Cairo—a spiritualist medium. But the two men underestimate Cairo. He's a master of the occult and the most debauched man in London. Conan Doyle and Houdini get more than they bargained for when they interrupt a magic ritual and accidentally set loose a force for ecstasy and chaos on an unsuspecting Edwardian London.

Soon one of their friends is falsely accused of a grisly murder. Conan Doyle and Houdini are sure the real killer was at the ritual with them. They're faced with a locked-room homicide that baffles even Houdini.

One by one, people in the little group who attended the ceremony feel an insidious influence creep over them. Each succumbs to a burst of creativity, shortly followed by an act of uncontrollable madness.

The proper Victorian gentleman and the ebullient New Yorker must team up to solve the murder and stop the thing they set loose before it completely unravels their ordered world.

Chapter 28 - Encounter in the Fog

As we strolled along the tiny cobblestone lane, there was not a cab in sight. Not that we could see far in the darkness. The damp fog off the Thames had worked its way north to this neighbourhood. A thick patch of it rolled in quickly. In a few minutes, we could barely see across the street.

A little chill ran down my spine. I had a distinct feeling of being watched. I turned to look behind me. The gaslights had become faint glows that hid more than they illuminated. Movement at the corner of my eye caught my attention. There, had something behind us just flitted into the shadow of a doorway? Or was it merely a swirl of mist? I felt alone and quite vulnerable. I was grateful for the sturdy companion at my side. Houdini spoke in a low voice.

We picked up our pace and made south for Euston Road. The fog thickened and thinned around us in pale, cottony patches. We encountered no other soul. At its densest, the fog could have concealed armies. Indeed, it played strange tricks on one’s ears. I thought I heard footsteps shuffling along behind us. Perhaps it was the lateness of the hour or the disturbing events we were investigating, but the sound made me uneasy. We continued on even more quickly. Then, suddenly, we were in the clear. We could see the entire block of flats behind us. I paused, and restrained my companion with a hand on his arm. Here was our chance to get a good look at our pursuer. I could not be sure, but I thought I heard a foot scrape the stones of the road before silence surrounded us. I looked to Houdini.

“I heard it too,” he said softy. He jerked a thumb over his shoulder. “Back there.”

Why his confirmation filled me with dread, I cannot say. The person behind us was almost certainly a weary pilgrim such as we, eager for his own sitting room and a warm fire.

I saw that Houdini had drawn the sharpened screwdriver out of his pocket and held it like a dagger. We turned to face whoever was following us.

Halfway down the street a single gaslight glowed feebly. At the end of the lane a figure approached. It jogged along the walls of the buildings. I got an impression of a manlike shape with an impossibly lean body and grotesquely long limbs. It loped along in an odd, loose-jointed way. I could have sworn I heard soft, animal-like moans. It was as if some savage beast were hot on our trail. I felt Houdini clutch my shoulder.

I could only shake my head. It was like no creature I had seen in all my travels. The thing’s unnatural form filled me with loathing. Its huge shadow, magnified by the streetlamp, flitted along the bricks of the buildings.

I stood, my eyes riveted on the gaslight down the street. What would I see when the thing stepped full into the glow? As if in answer to my thought, it paused and sniffed the air. The misshapen head swiveled until it pointed precisely in our direction. Its eyes glittered with a malign emerald glow.

The beast took a step forward. Then an absolutely unexpected thing happened. Just before it stepped full into the light, the creature swarmed straight up the sheer wall. I gasped at the speed with which it scaled the bricks. It climbed until it was lost in the shadows. For a moment, all was silent. Then I heard a sound that chilled me to my soul—the faint sound of claws scrabbling across the roof tiles high above us. And the sound was approaching rapidly.

We took off down the street at a run. My shoes slipped on the flagstones. I wheeled my arms to catch my balance. On and on we raced. The blood beat in my temples. We careened into abrupt turns and doubled back on ourselves. Soon we were back in another patch of fog. My breath sounded harsh in my ears. At last I felt Houdini’s grasp on my arm as he pulled me to a stop.

I sagged against the cold bricks and gasped for air. Silence surrounded us. My heart pounded in my chest. Had we given our pursuer the slip? The alley next to us was dark. We huddled in its shadows and peeped around the corner. We could barely make out the walls of the tenements that loomed over us. The stones beneath our feet were rough and uneven. The cold air seared the back of my throat as I caught my breath. I scarcely dared look back for fear of seeing something.

Houdini whispered. “I think we lost—”

The unmistakable sound of scrabbling above us cut him off.

The cry echoed off the walls. We plunged into the blackness of the street before us. I was racing at full speed before I realised that it was I who had shrieked the command. Our feet pounded the pavement as we dashed through the darkness. We both flung our arms up to protect from an overhead attack. The thing that pursued us—was it what had murdered Mackleston’s brother?

The street turned out to be a long, curving one with no side alleys. But at the end I thought I discerned a glow of light.

I thought of what the creature above us had done to Reggie and shivered. How could we defend against an attack that could come from any direction? But each breath I drew felt like a stab in my side. I couldn’t run much longer.

Not three yards from the end of the street a huge figure loomed out of the lowering fog in front of us. We skidded to a stop and barely avoided colliding with it.

“Here now, what’s the rush, lads?” a loud voice boomed. Two hands the size of hams clutched at our lapels and hauled us into the street. “Let’s get a better look at you,” the voice declared.

We found ourselves under an electric light on Euston Road. The figure looming over us revealed itself as a frowning giant of a policeman. The fog had lowered again. Little droplets had condensed on the brass buttons of his uniform. They glittered like gems under the lamplight. Though I continued to gasp for air, my relief was palpable. As he saw how we were dressed, a look of surprise registered on his face and he loosed his hold on us.

“I beg your pardon, gentlemen,” he said. Then he noticed the sharpened screwdriver, still clutched in Houdini’s hand. “Now what—”

“Constable,” I panted, “someone or something is after us.” I pointed into the blackness behind us.

Houdini nodded vigorously as he leaned over to suck in air. “Tried to lose him ... chased us a good two miles.”

“Oh, he has, has he?” The officer drew his truncheon out of his belt and turned to face the yawning darkness. “We’ll see about that.”

I could not let him face the demon alone. “Whoever he is. .. he’s gone mad,” I warned between breaths. “You must ... get reinforcements.”

The policeman turned back to us and smiled. “One man only?”

The policeman seemed not to have heard me. His face lit up in anticipation. William the Conqueror’s face might have looked the same as he led the charge at Hastings.

“I hope he tries to resist arrest. I truly do.”

So saying, he picked up a little black lantern from the ground beside him. He lifted it to head height and plunged into the unlit street.

“Like Custer at Little Bighorn,” Houdini muttered to himself. Neither of us had fully recovered, but we straightened up and staggered after the man.

“Wait up!” Houdini called. We chased the watery glow of light from his lantern as it floated through the foggy darkness. Before we had gone six steps, the light appeared to dance wildly. We heard a shout, a feral screech, and finally a shrill scream, like a soul in torment. The shriek rose and fell. Abruptly, it cut off. The lantern fell to the street with a clatter. It glowed brightly for a moment and then winked out. A terrible silence followed.

H. R. Knight is the pen name of Harry Squires, a critically acclaimed author who writes mysteries—some paranormal, some not—as well as thrillers, and the occasional magazine article. Harry has worked as an insurance underwriter, a software marketer, and a corporate trainer. He attended Journalism School at the University of Missouri and film school at UCLA.

Having traveled all over the world, he’s developed a preference for countries that produce good wines.

He shares a home and a life with his wife Susan, who publishes unconventional paranormal romances. They own, train, and show Belgian Sheepdogs. Occasionally the dogs are kind enough to give Harry and Susan hope that they may someday be in charge of the pack.

They all live at the beach in Southern California.