Next chapter of humanity - Our Dried Voices by Greg Hickey 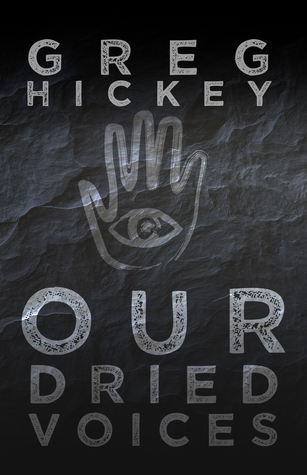 In 2153, cancer was cured. In 2189, AIDS. And in 2235, the last members of the human race traveled to a far distant planet called Pearl to begin the next chapter of humanity.

Several hundred years after their arrival, the remainder of humans live in a utopian colony in which every need is satisfied automatically, and there is no need for human labor, struggle or thought. But when the machines that regulate the colony begin to malfunction, the colonists are faced with a test for the first time in their existence.

With the lives of the colonists at stake, it is left to a young man named Samuel to repair these breakdowns and save the colony. Aided by his friend Penny, Samuel rises to meet each challenge. But he soon discovers a mysterious group of people behind each of these problems, and he must somehow find and defeat these saboteurs in order to rescue his colony.

When about half the colonists at this particular meal hall had received their food, an adult woman moved to the front of the line. A young boy, no taller than her waist, stood behind her. The woman stepped up to the wall, the red light above the hole flashed... and nothing happened. There was no clicking, no whirring, and no meal cake emerged from the hole in the milky blue wall. Some people a few places behind the first woman, by now so accustomed to the regular pace of the line, stepped forward in anticipation of her taking the food and continuing on. When the line did not move, they bumped awkwardly into the colonists in front of them, very much surprised that there should be a fleshy, breathing, human body in their path instead of empty space. Those closest to the front of the line fell silent when they saw the woman had not yet received her meal, and then the silence spread evenly and rhythmically down the line, like a row of pillowed dominoes falling to the floor. Yet all the colonists continued to wear the same insipid half-grin on their faces as they waited patiently for the food to be dispensed and the line to creep forward once more.

A long, loud, whining shriek from the young boy waiting with his mother at the front of the line broke through the stillness, and it was this sound, not the actual interruption of the food service, which seemed to have the greatest effect on those in the hall. The boy did not cry. He shed no tears, and the sound which emerged from his mouth was not a breathless and choked sobbing, or even the petulant howl of a child’s tantrum. It was a primal, animal moan that rose from the depths of his unfilled stomach, rushed up his throat with a cold and persistent ferocity and forced its way over his teeth, throwing his head back as it broke from his lips. No one tried to comfort the boy. His mother did not even turn around to look at him. Her weak smile faded, but she continued to stare at the dark hole in the wall, still waiting for her meal to appear. Then a child some dozen places back in the line picked up the boy’s howl, and then a woman farther behind did the same. Soon the entire line was wailing loudly.

Greg Hickey was born in Evanston, Illinois in 1985. After graduating from Pomona College in 2008, he played and coached baseball in Sweden and South Africa. He is now a forensic scientist, endurance athlete and award-winning writer. He lives in Chicago with his wife, Lindsay.