"I could see this being a true story" - Bear Creek Road by L.C. Morgan 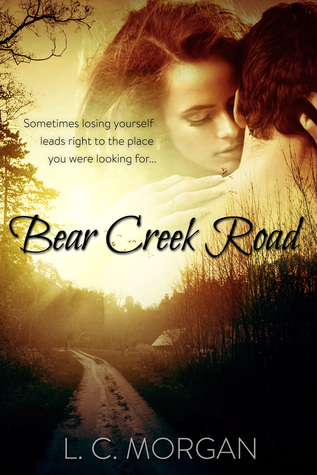 Secluded and quiet is exactly what Laney Walker is looking for when she decides to pack up and move across the country. It's what she wants, what she thinks she needs—until she meets Joe Boone.

Contracted to replace the plumbing along the property, Joe is first to arrive and last to leave. And to Laney's surprising disappointment, he never has much to say.

But the more Joe comes around, the more she learns about him and soon finds the man is as flawed as the house he's fixing.

A fact that only seems to draw her closer to him.

I think it would be difficult for anybody not to fall in love with this couple. There were a few times that I struggled with Laney just letting Joe’s unclear comments slide, but I could understand where she was coming from. There were also a few pretty funny parts too. When she showed up at his house and ended up turning the tv on, but I loved the way things flowed so honestly between them. I could see this being a true story, which is pretty rare with a lot of romance nowadays. - Goodreads

The cabin was dark and gloomy in the moonlight, its stairs even squeakier than mine. I slowly followed him up them, waiting until he flipped on the light before stepping inside.

The decor was what I would have expected—nonexistent. A plain brown couch was pressed up against the bare wood wall, a boxed-out TV sitting on a makeshift stand on the opposite wall with a set of rabbit ears on top. There were no curtains or throw pillows. No rugs, no runner on the tiny dining room table. But it was clean, and it was cool, and it smelled like him.

My eyes fluttered closed as I breathed him in, the scent so overwhelming I felt myself sway. When I opened them again, he was gone.

Glancing from side to side, I stepped further inside and peeked down the hallway, finding a bright light shining from an open door. I hesitantly started for it, smiling when I saw it was the bathroom. A towel and washcloth had been left out on the counter by the sink. I moved inside and closed the door, feeling around and then reaching up to find no lock.

“Okay …” I mumbled to myself, turning back to the tub and twisting the handles until the temperature was perfect. Glancing back at the door, I quickly stripped out of my clothes, jumped inside and pulled the curtain shut behind me.

The water was searing in the best sort of way, steaming up the room and loosening my sore muscles from a day of angry weed pulling. I could have stood under the hot spray all night, just basking in the forceful water pressure. This shower was so much better than Mona’s.

Dipping my head back, I closed my eyes to wet my hair, hurriedly wiping the water from my face when I felt a brush of cool air against my legs.

My heart pounded, thinking it was Joe, but it was only the air from the furnace blowing the shower curtain. I couldn’t imagine what I would have done if it had been him. The fact that I wanted to find out had me washing off a little quicker. I didn’t know if I was ready for him to see me naked.

I dried off and got dressed as close as I could to the door in order to avoid that accident waiting to happen. If he did ever end up seeing me naked, I wanted to be prepared and not look like a drowned cat if I could help it.

When I emerged from the bathroom, he was coming down the hallway, shirtless and with the button of his pants undone. I swallowed, unable to take my eyes off his zipper until he reached out for my towel.

“Nope.” He slid past me and into the bathroom, setting my bag out in the hallway before cracking the door. I stood outside of it while I listened to him adjust the curtain and turn on the shower, trying to decide if I should just take off or not. I was getting ready to knock and tell him I was leaving when the water suddenly shut off, the shower curtain screeched and the door opened to reveal a mess of towel-dried brown hair and a shiny, wet chest.


Goodreads ** Amazon ** Barnes&Noble
About the author:
L. C. Morgan resides with her husband on the outskirts of a small town in the heart of it all. A lover of many things, she puts family first and diet Coke second. When not working she can be found spoiling her new nephew with lots of love and kisses while awaiting her own little bundle of joy or at home, face shoved in her Kindle, fingers typing away to free the words from her head. She writes them for you and hopes you enjoy them as much as she enjoys yours.


Author's Giveaway a Rafflecopter giveaway
Posted by CCAM at 10:19 AM