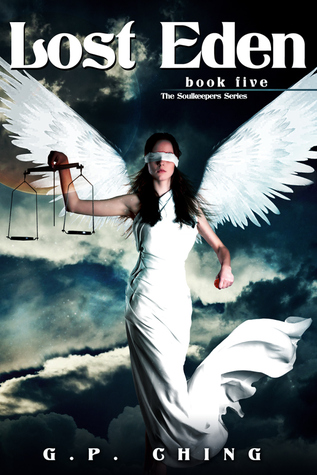 When Fate gave Dane the water from Eden to drink, she did more than save his life. She changed his destiny.

Since the beginning, a compact between God and Lucifer has maintained a tenuous peace, balancing Soulkeepers and Watchers and the natural order of things. Dane upset that balance the day he became a Soulkeeper. Fate broke the rules.

Now, Lucifer is demanding a consequence, requiring Fate to pay the ultimate price for her involvement. God intervenes on the immortal’s behalf but in order to save her soul must dissolve the compact and with it the rules, order, and balance that have kept the peace. A challenge is issued. A contest for human souls begins. And the stakes? Earth. Winner take all.

The Soulkeepers are at the center of a war between Heaven and Hell, and this time, nobody, anywhere, is safe from Lucifer’s reach.

How did you come up with the idea for the Soulkeepers?

I was talking to a friend about creation stories one day, the one with Adam and Eve in the Garden of Eden, and I questioned how the serpent was able to get to the woman. It was supposed to be the safest, most perfect place created by God. When I started to research different interpretations of the creation story based on this questioning, another story started to play out in my brain, one of a boy who didn’t believe in God but would come to play a pivotal role in the battle between Heaven and Hell. That was the birth of the Soulkeepers series.

All of your characters have imperfections. Jacob has anger issues, Malini struggles with disrespect for her parents, Mara is jealous, and Dane, dishonest with himself. Do you worry the characters won’t be likeable?
In real life, people make mistakes. Some make the same mistake again and again. Writing a character without flaws is, in my opinion, unrealistic. But it’s fiction, you say! Yes, it is. It doesn’t have to be realistic. Then again, I try to make my characters relatable and human. Each reader brings his or her own feelings, thoughts, and experiences to a story, and it is very possible that one reader’s “relatable” is another’s “detestable.” But, in the end, my characters tell me who they are as they experience the story, and I relay that to the reader, warts and all.

All of your books depict God as a reflection of the character who sees God. Sometimes God is a man, other times a woman, sometimes black, other times a child. This is in direct contrast with Lucifer whose blond good looks never change. What can you tell us about why you wrote the characters this way?

The dichotomy between God and Lucifer in The Soulkeepers can seem confusing. The Lord of Illusions always looks the same, blond and perfect, not a hair out of place. In contrast, God, who is truth and love, appears in various illusions for the viewer’s comfort. The idea is that God is so majestic and beyond our understanding that seeing Him in his true form would kill someone. So out of love and compassion, God changes himself to be more digestible for the other characters’ psyches. This isn’t dishonest or an illusion because God is upfront about the reason for the taken image. It also represents how we are made in God’s image, but clearly, a single physical representation couldn’t possibly define him/her. God’s presence then, reminds a person of their best qualities.

In contrast, Lucifer’s illusion is meant to look better than the other characters’. His impossible beauty is both a lure to humans and meant to shame them. Being around Lucifer would make you feel poorly about yourself before he even said a word. Lucifer isn’t concerned with other characters’ comfort, he simply wants to control everything. His illusion, then, is meant to intimidate and elicit jealousy.

God approached him, the air crackling with her presence. The back of Lucifer’s head glowed brassy in her light. “Very well. What is your suggested price?”

“My price is Fate. She has been in her position far too long. I will choose her replacement, and she will step down.”

“No!” Fatima yelled, her hands flying to cover her foolhardy mouth. Why had she allowed her true feelings to show? Now he’d be even more likely to use those feelings against her.

He turned the force of his stare on her, laughing through a toothy half smile. “Oh yes, Fatima. Perhaps, I will not only choose your replacement but take your soul as my own.” In a blink, he was in her face, his hand on the small of her back. Her skin squirmed beneath his touch. “You are a beautiful sinner. Hell, could use an ornament such as you.”

“Let her go.” A wash of cool light poured through the room, and Lucifer retreated, joints folding unnaturally in his haste for the shadows. “The Watchers who reside on Earth negate your ability to make such a demand. You are in breach of the law, Lucifer. You must return your minions to Nod or Hell.”

“Or what?” Lucifer carefully slithered into the shadow of a bolt of fabric where his eyes could open fully.

“Or the compact is rendered null and void.”

“War.” The word rolled off of his tongue, smooth as melted butter.

G.P. Ching is the author of The Soulkeepers Series, Grounded, and a variety of short fiction. She specializes in cross-genre paranormal stories, loves old cemeteries, and enjoys a good ghost tour. She lives in central Illinois with her husband, two children, and one very demanding Brittany Spaniel.
Visit her at:

a Rafflecopter giveaway
Posted by CCAM at 12:30 PM