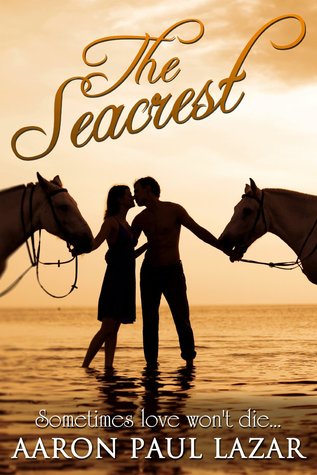 He was just seventeen when he had a torrid summer affair with the girl who stole his heart—and then inexplicably turned on him. Finn may have moved on with his life, but he’s never forgotten her.

Now, ten years later, he’s got more than his lost love to worry about. A horrific accident turns his life upside down, resurrecting the ghosts of his long-dead family and taking the lives of the few people he has left.

Finn always believed his estranged brother was responsible for the fire that killed their family—but an unexpected inheritance with a mystery attached throws everything he knows into doubt.

And on top of that, the beguiling daughter of his wealthy employer has secrets of her own. But the closer he gets, the harder she pushes him away.

The Seacrest is a story of intrigue and betrayal, of secrets and second chances—and above all, of a love that never dies.

GUEST POST
Squeeze a Little Poetry Into Your Novel

For those of you who'd like to write a novel, or who already have, let's specifically talk about poetry.

But how does writing poetry relate to writing a novel?

I'm talking about short, descriptive passages that capture lush images branded in your brain from the last time you glanced out your car window and sighed at the beauty around you.

You've had moments like those, right? Even if you live in the middle of the city, there must be visions that thrill you. Like a brave cornflower poking out of a crack in the sidewalk, or the way the lights sparkle at night in the oily puddles, or the majesty of an old brick house whose character lasted for centuries.

Descriptions of these scenes may be used to slow down the action (on purpose), to paint the scene, or to simply delight your readers. And it's okay to include some poetry like this smack dab in the middle of your book.

Anyway, who cares what the rulebooks or the stuffy experts say? I say, write from your heart and with your intuition, and worry about genre and rules later. So, I'm a bit of a rebel. Maybe that's why I'm not a NY Times bestseller. Yet (grin.)

Sometimes I think these poetic little gems turn a plain old mystery or romance into a "literary mystery" or “literary romance.” But let's not delve into genre right now, or what distinguishes one style from another. Maybe that's a topic for another day.

So, regarding "poetic passages cleverly inserted in a great book," I've noticed little gifts like this in books by Dean Koontz over the last few years—especially in the Odd Thomas series. Whenever I come across the lovely nuggets, I smile and savor them. Gifts, that's what they are. Pure and simple.

When I write my own books (www.lazarbooks.com), a similar thing happens. It's not a conscious thing, not at all. It just comes out of me when I picture Finn McGraw standing in his blueberry fields, or gazing over the beautiful bay on Cape Cod. And because my family and I just revisited Cape Cod for the first time in years, my heart and soul are full of seaside images. I savor the opportunity to capture and share it. With you. With my readers. And with those who may someday read my books. Like my grandkids.

Most of my "poetic" passages come from visions I'm blessed with simply driving to work, walking on the Genesee Valley Greenway, or even in my own gardens. This heady, bucolic environment breathes life into me, inspires me to no end. And often, as some of you know, I get to capture the scenes with photos.

One local image—the incredible beauty of a wheat field—has been ingrained in my head for years. I wrote the following segment in the fifth LeGarde Mystery, FireSong. In this scene, Gus has just passed an area of the tornado-ravaged countryside and is driving home to check on his family.

"Beyond the perimeter of the damage, the late June wheat crop stood intact, ready for harvest. Heavy-headed stalks waved in the breeze, producing undulating patterns in the great expanses along the roadside. A hint of green whispered beneath the golden-pink surf rippling over the fields."

Here’s a segment from For the Birds that I didn’t need to include, but I wanted to. Hope you enjoy it.

“A great blue heron soared over the lake, a majestic giant with long, spindly legs trailing behind him in flight. He circled past us and landed in the shallows on the far side of the cove. Rings of waves circled gently outward from where he stood, in ever expanding ripples on the water that mirrored blue sky and cottony clouds. I watched with fascination. He stood stock still, his long, skinny beak pointed down at the water. The feathers along his slender neck were tinted pale rose, and his head sported a black stripe. For a long time, we munched on our snacks and the heron watched for fish. I thought he must’ve gone to sleep when in a sudden jerking flash he popped his head underwater and came up with a sparkling fish in his mouth. It was gone in a second, sliding down his S-curved gullet in one quick gulp.”

And finally, here’s a little bit from The Seacrest, my new love story set in Brewster, Cape Cod.

“Sweet peas and purple beach plums lined the sandy path to the shore, and the screeching of gulls provided comforting background noises to the swirling, salty wind whistling through the sharp grasses blanketing the dunes. The tide was out, and periwinkles scuttled in the shallow water, surrounded by flitting silver minnows. Ripples stretched across the wet sand, making designs almost too perfect to be real.”

“She sat on the jetty rocks, knees pulled up to her chin, her eyes shining beneath long lashes. The sea glimmered in the background. At low tide, the ripples on the wet sand stretched for miles toward an azure horizon. I painted her hair silky and blowing in the wind, one of the new techniques I’d learned from my class already this week. I’d daubed seagulls into the background, and added a bit of turquoise and tangerine to the horizon line where the sea met the setting sun. Now I almost smelled the musky scent of low tide, the muddy sand, the debris of crab shells and seaweed. I heard the screech of the gulls, and felt her soft hand on mine. In a near self-induced trance, I imagined her voice, her lips kissing mine, her body pressed close to me, her legs encircling me.”

I'm not saying that's the best writing in the world, I'm sure I could hack it up over and over again to tighten it further. But this is an example of what I mean by introducing “a little poetry” into your novel. It is certainly possible to slide a bit of this loveliness into your work without losing tension, so go ahead and give it a try!

Aaron Paul Lazar writes to soothe his soul. An award-winning, bestselling Kindle author of three addictive mystery series, writing books, and a new love story, Aaron enjoys the Genesee Valley countryside in upstate New York, where his characters embrace life, play with their dogs and grandkids, grow sumptuous gardens, and chase bad guys. Visit his website at http://www.lazarbooks.com and watch for his upcoming releases THE SEACREST (2013), SANCTUARY (2014), and VIRTUOSO (2014).

"A poignant love story that will have you reaching for the tissues...Every woman needs her own Finn MGraw..." - bestselling author Victoria Howard

Thanks so much for having me here today! If folks have questions about The Seacrest, writing, or life in general (LOL), feel free to ask. ;o)